He’s been given a police caution

The head of the Moncrieff Club, Oxford’s latest notorious drinking society, was arrested on Sunday night outside Hertford College.

Kelvin Keeley, the founder whose initials “KTK” can be seen on the seal of the handwritten invitation sent anonymously to The Tab last week, encouraging attendees to “come fuck it up with us”, assaulted several people before being apprehended by the police. He was later given a caution.

Speaking to The Tab about the incident, Kelvin blamed his “Northern roots”. He added: “I lashed out which I deeply regret and have asked for God’s forgiveness.”

The Moncrieff Club has three other members, all male, who along with Keeley decided to revamp the club after it had almost died out.  They all have a customised tie and signet ring. Last week it was reported that they made a disturbance and upset fellow customers at their social celebrating “Right Honourable cuntery” at a local Oxford wine bar, where they had pre-ordered 20 bottles of Bollinger. 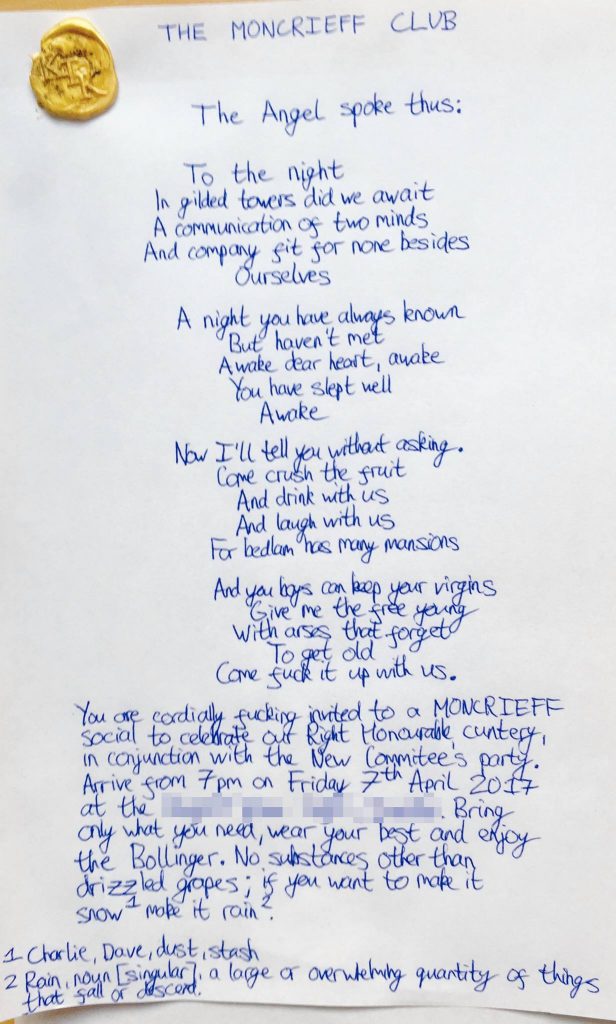 At Hertford, he was arrested, and it has been reported that he told bypassers to “fuck off”, and used the word “cunt”. He then spent the night in police custody, and was given a police caution. During the six years that this will be on his record, if he breaks the instructions given to him by the police, he can be re-arrested and prosecuted.

Kelvin told The Tab: “There is only media interest because I am studying at Oxford, if I were studying at Manchester the police wouldn’t have been called and there definitely would not be an article in the student press.”

He told VERSA he categorically denied any involvement in Moncrieff club: ““I deny any association with The Moncrieff Club.” But screenshots seen by The Tab show Kelvin setting up the club and sending the invite to them.

VERSA magazine reported that the Moncrieff club has been described as “a joke. They would never get into a decent club and after last night may rightly struggle to find gainful employment.”  They also claimed that Keeley has been described as being, “neither rich nor posh. He is astoundingly arrogant and vulgar and has lost most of his friends through his ridiculous … antics.”