Oxford University has come under fire for the large difference in prize money between its History undergrad awards for the best thesis in British and African history.

The winner of the Arnold Modern Historical British history thesis award currently receives a prize fund of £500, whereas the Kirk-Greene African history award winner only receives £75.

The post received over 100 Facebook reacts and sparked a debate, where some students defended the disparity between the two prizes, commenting that as Oxford is a British university, this is to be expected.

However, other people saw this as a sign of Oxford’s wider race problem, with people countering that as a global university, it should act like one, and that this prize discrepancy is just one example of Oxford’s “terrible reputation and history of how it treats black and black African students, applicants, and people generally . . . especially in its ties to Rhodes”.

Last year the Oxford Union passed a motion that it was “institutionally racist” after a particular scandal involving a “colonial cocktail” being offered at a debate, that was accused of “trivialising centuries of oppression”.

More recently, the former higher education minister David Lammy accused the university of failing to properly tackle racism in their application process caused by an “unconscious bias” against black and disadvantaged applicants.

In response to the history prize money difference, Oxford student Princess Ashilokun commented: “I repeat: The disrespect has been monetised.”

Speaking exclusively to The Tab, she added: “Enough is enough, Oxford needs to get its act together, it talks about diversity and inclusivity when it actually has neither; if the university *really* wanted to change its attitude and start decolonising this space, with all the resources it has acquired, it would have done so by now. It’s up to us the students to start the change we want to see.”

Billy Nuttall, who first highlighted the difference, has since set up a crowdfunding campaign to make up the difference between the two prizes.

Speaking to The Tab, he said that by discouraging pursuits of non-British history we “damage the history coming out of Oxford and limited western perspectives on history when we should be, in the 21st century promoting global history at global institutions like Oxford”.

He added the university “sends a message to BME students globally that their history is not as important as British history, which at a university with a terrible track record on diversity is damaging for outreach. . . If Britain wants to be an island with a global reach, and if Oxford wants to share that goal, studying African, Asian, and American history should not be the exception, but the rule.

“Each of these places play a part in our global history, and I am likely to graduate without any understanding of those roles in our shared history.” 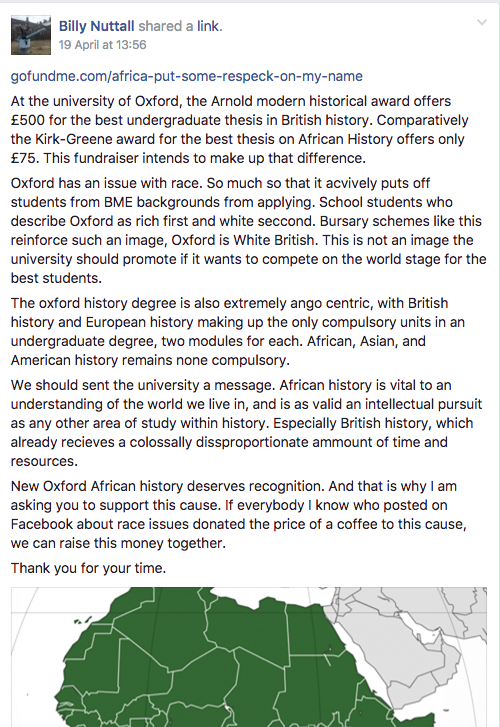 Nuttall recently went to an outreach event showing school pupils around Magdalen. When the students were asked what their first impressions about Oxford were, their first answers were “rich”, and “white”.

A gofundme page has already received £75 in donations.

A spokesman for the Faculty of History commented to The Tab: “Both prizes are funded by external donations, not by the History Faculty, and the discrepancy in their value is simply because one donation was considerably larger than the other. But we are conscious of this inequality and, as of this year, we are using our own funds to increase the Kirk Greene Prize for Modern African History to £150, in line with other prizes that are funded by the Faculty including the Modern European History prize.