Scientific animal testing: The end of the road for Oxford?

For as long as animal testing has been around, it has been at the centre of one of the largest ethical debates in society; about what level of power we, as humans, can exercise over other animals. And all this time, Oxford has been at the forefront. Yet the time may have come where science can stand on its own two legs rather than using other creatures to support it.

We all have a very embedded idea of what animal testing consists of: dark, cramped and exploitative conditions for animals that are forced to do any action on the whim of the human in command. This undoubtedly was true, perhaps even in some places still is, however with the campaigns headed by companies such as Lush, there has been huge improvements in the regulations surrounding animal testing. Nonetheless, the moral question about whether animals should be used for human advancement remains as pertinent as ever.

Now, Oxford claim they’re toning down how they conduct scientific research on animals.

Professor Matthew Rushworth’s is using neural imaging to study decision-making in the brain. They’re using a new technique – transcranial magnetic stimulation – on humans to reduce the number of primate they use.

He told the BBC: ” This new technique allows us to disrupt the activity of the pre-frontal cortex temporarily in human volunteers. That means we can study what’s going wrong when decision making breaks down. So it’s only when we’re not able to use transcranial magnetic stimulation that we move to animal models.”

The complexities of the brain have so far meant that animal testing has had to continue and, many would still argue, it still must. Recent reports have advertised the fact that animals are now kept in zoo like conditions with other animals so they are able to socialise – Oxford do the same. Initially this may seem more palatable to consumers, but this should actually just call into question the morality of zoos themselves, rather than making it okay. Can we say that just because animals are kept in ‘socialised’ settings that this somehow makes it acceptable? 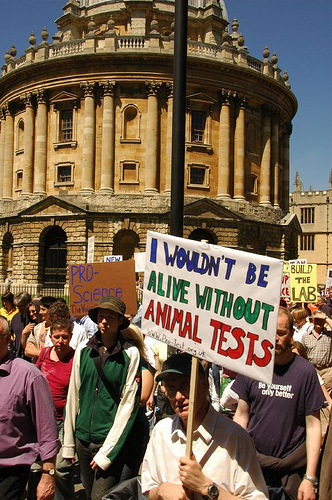 Those who support the idea of animal testing under the new regulations would argue that this testing is invaluable to the research into medicine and scientific discovery and therefore must be continued. Testing of this sort is carried out on primates, rather than mice or other such lab animals; primates have such a similar brain to humans, thus making the findings that bit more accurate.

But in this day and age, could it not be possible that, with the technology that exists, computer brain models would serve this purpose, rather than exploiting animals for the sake of human betterment? When there are discoveries that allow babies to be made from scratch in a lab or the ability to control missiles from a control room thousands of miles away; could we not use computer models we have of the brain to test, rather than subjecting these monkeys on a daily basis?

Without wanting to dismiss the work and progress that has happened in improving the conditions for animal testing, does this not just try and make something that’s unacceptable, slightly more tolerable to society, thus prolonging the problem itself. It’s time to make use of the enormous advancements in technology and leave the long exploited primate well alone.