UPDATE: Sullivan was forced into a humiliating climbdown in a emergency meeting of Standing Committee today, after Committee Members voted 9-3 to overturn the expenses passed on Monday.

Sullivan, who has headed the Union since the end of Hilary Term, passed a motion to pay lawyers up to £1200 to stop The Tab reporting that he belonged to the group.

When contacted by our reporter, Sullivan:

• LIED, claiming he’d never heard of The Banter Squadron
• Tried to BARGAIN with us, offering stories of other students taking drugs
• THREATENED The Tab with an injunction to stop us reporting the story

The motion to grant Sullivan a £1200 warchest, which was passed in Standing Committee on Monday by a margin of nine to two, is now being fought by 30 Union members who have signed a special adjournment motion.

Sullivan was using the money to – among other things – deny involvement with The Banter Squadron, a Christ Church drinking society, something he finally admitted today. 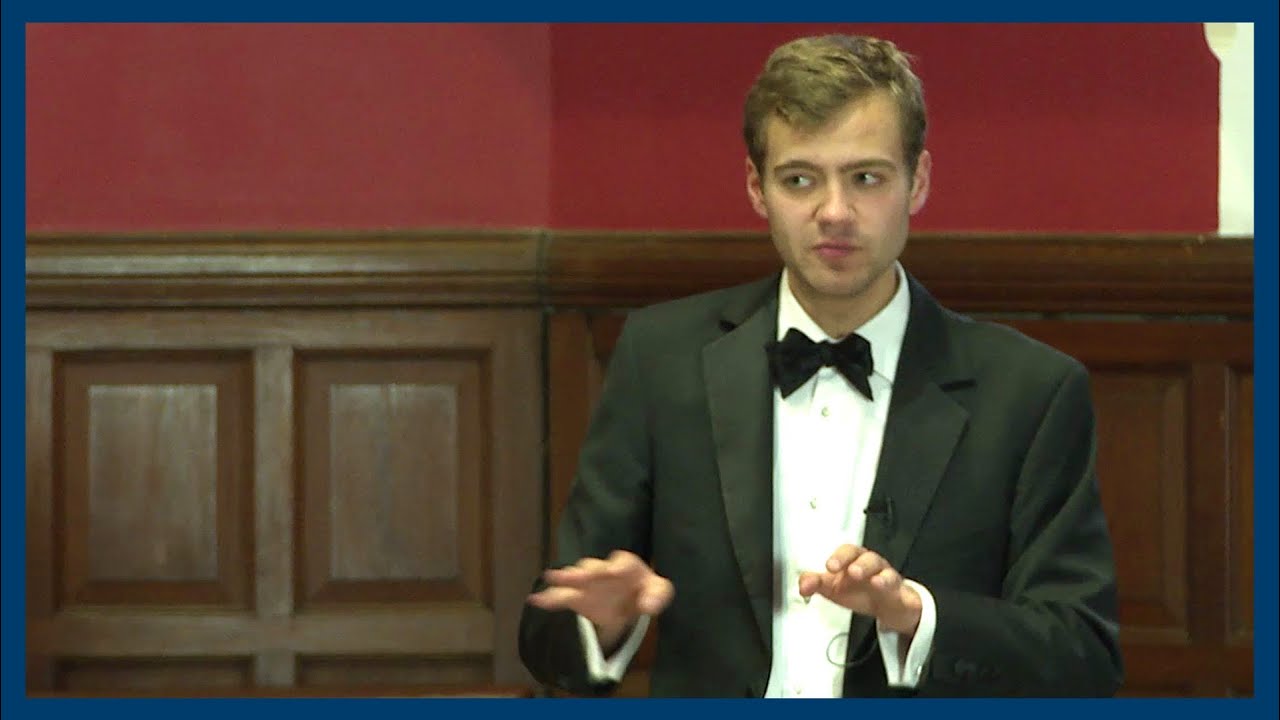 In an earlier statement sent to the Tab, Ben Sullivan denied any involvement the ‘Banter Squadron’, even going so far as to claim “I am not aware of what the Banter Squadron is.”

He also told us: “I am not a ‘member’ of any such society/informal group.

However, Ben Sullivan’s Christ Church yearbook entries from 2011 and 2012 both explicitly mention the ‘Banter Squadron’. One tells how Ben “contributed such immortal lines as ‘I don’t have, low standards!’ and ‘Stansbithia’ to the collective Banter Squadrons [sic] musical ouevre [sic].”

Ben Sullivan’s entry for the following year contains a further embarrassing reference, which reads “2: the number of virgins Ben left behind in the Banter Squadron.” 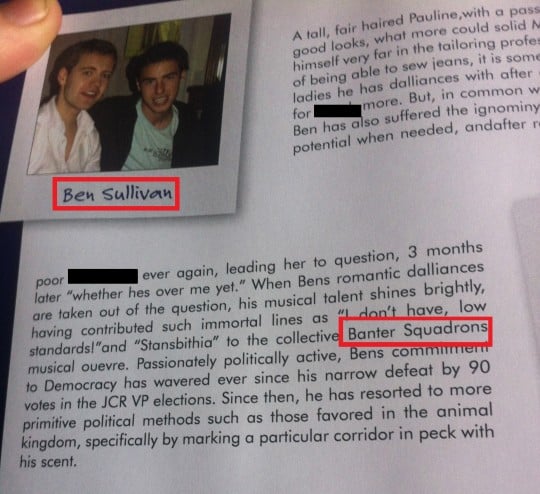 When we approached him, Ben lied: “I am not aware of what the Banter Squadron is”. 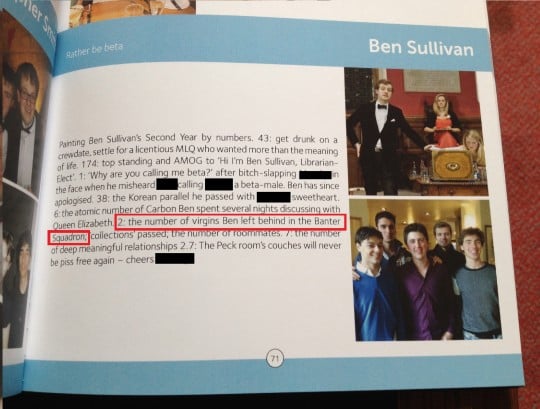 An unpublished 2012 yearbook page for the Banter Squadron – which Sullivan claims is a hoax – also explicitly names Sullivan, referring to the group as “An elite Christ Church drinking society, founded in 1304 by a group of libertines with exceptional chat.” 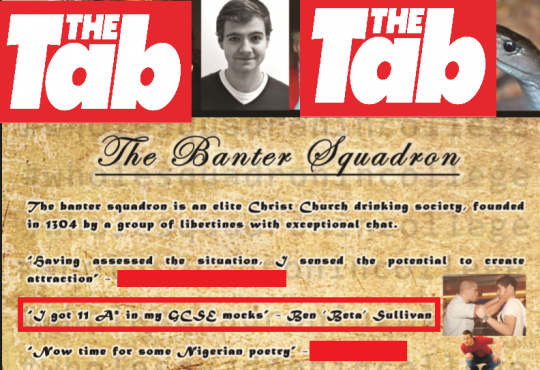 “I am not a ‘member’ of any such society/informal group,” he said.

Membership of the Oxford Union currently costs over £200 for most students, meaning that the potential cost of Sullivan’s fees is equal to approximately six memberships.

Incredibly, when earlier asked for comment, Ben Sullivan attempted to cut a deal with our reporter, asking: “Do you want to trade [stories]?”

He then went on to offer comments about the alleged drug use of members of the university, as well as allegations that members of the wider Oxford Union blackmailed other students, in exchange for the Tab not publishing this article.

Since the passing of the Union motion, over 30 members have signed a Special Adjournment Motion, which will bring the issue of Sullivan’s expenses before the Union debate chamber this Thursday, before the debate. 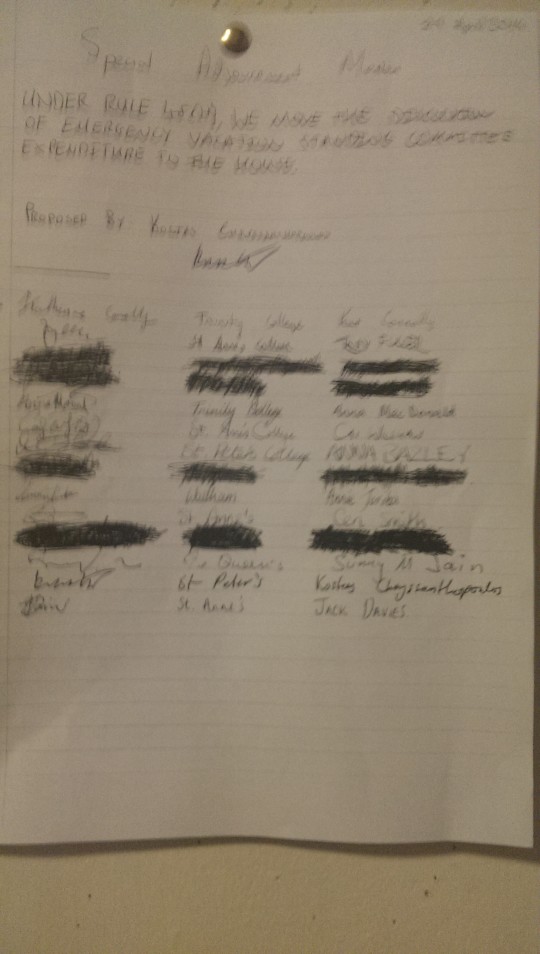 A copy of the Special Adjournment Motion that temporarily prevents Sullivan from claiming personal expenses.

A group of co-signatories of the motion, including Hamish Forbes of Merton College, said to the Tab: “The motion passed in standing committee supports one member’s side while suppressing that of another.

“It uses a considerable amount of membership money to stifle serious allegations. In my opinion, the motion gives the impression of brushing  the allegations under the carpet to protect the institution’s reputation as well as that of the student politician involved.

“The money the Union receives from its members should be used to fulfil the aims of the society. Any use of funds that goes against this needs to be debated by the wider membership, not just the inner circle.”

Sarah Pine, Women’s VP of OUSU, said to the Tab: “This is not just ‘classic Union drama’. There are some serious allegations. The Union is suppressing them by funding one member rather than another. This is nothing to do with debate.”

Ben Sullivan told The Tab: “I can confirm that over the vacation a Vacation Standing Committee met to earmark up to £1,000 + VAT for hiring lawyers on the Union’s behalf to write to the Tab about allegations made against me.

“My objection to the [previous] article were not primarily based on the references to ‘Banter Squadron’. Other claims made in the article were inaccurate.”

In an email, a senior Union officer wrote: “I believe the union has every right to defend the President rather than the individual.”