A student also reports being ‘laughed at’ and ‘hung up on’ by staff.

The business argues that they require this rent to finance planned “large renovations” and “investments”. Not doing so, they say, will leave their future tenants “upset”.

Manor Villages also claim to be aiding students who are financially struggling due to the pandemic. But this support has been branded by tenants as “useless”, leaving some with no options as they are “threatened” with legal action and mounting fees.

Additionally, the students report that the service provided by Manor Villages in this time has been “shocking” and that they are showing “no empathy”.

Manor Villages’ decision to collect rent comes in spite of direct pressure from local MP Lilian Greenwood and the Students’ Union to waive the remaining balance for all the tenants. 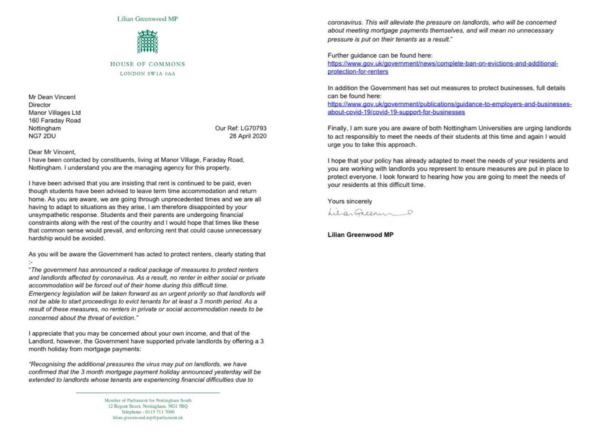 The students at Manor Villages are contractually obliged to pay for the full length of their tenancy, which can cost up to £7,130 a year.

In a letter sent by Manor Villages to local MP Lilian Greenwood, the accommodation claims it needs these funds for renovations and that failure to complete these “investments” in time for September would cause “long term upset” for its next tenants and, hence, they require the full rent. 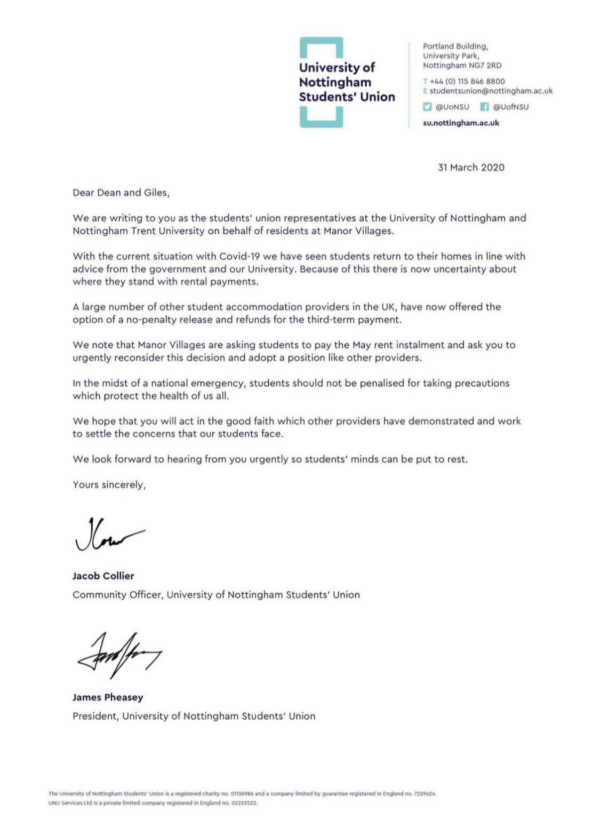 The letter sent by UoN’s Students’ Union to Manor Villages requesting that they reconsider their stance on rent.

In light of the fact that utility bills will be down, cleaners are not required, and general expenses are decreased for an array of reasons, tenants argue that there should, “at the very least”, be some rent reduction.

“We understand that Manor Villages is a business and needs a certain level of cash flow to remain operational…[but] our third rent instalment is not a fair evaluation of these costs,” one resident said. He believes, “Manor Villages are taking advantage of this situation to increase their profits.”

He added that his mother is currently working in the NHS and he feels his student loan would be much better used to help his family’s current situation amid the pandemic, as opposed to funding to Manor Villages’ renovations. 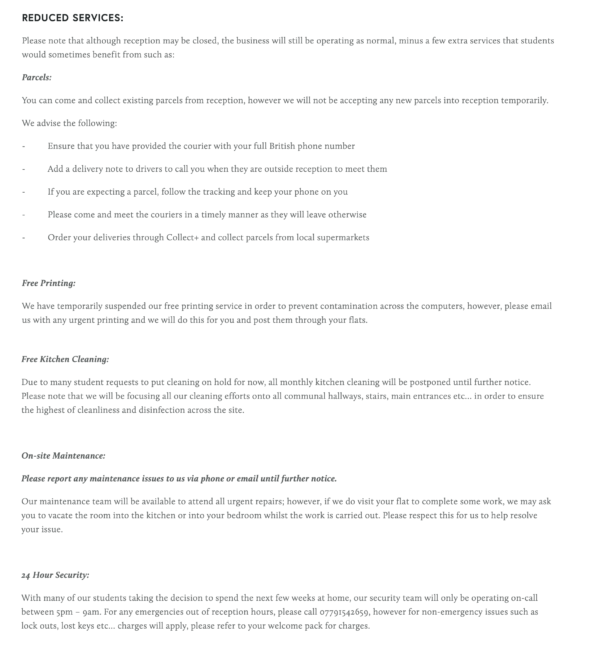 A list of services which Manor Villages are no longer incurring the costs of, taken from their website, which they describe as “free”.

Manor Villages say that they do not have “deep pockets” with which to cancel rent, unlike some of their competitors due to their smaller size, and believe businesses like theirs have “slipped through the net” of Government support.

The accommodation providers assured MP Lilian Greenwood that they are offering support for students facing “financial struggles” due to Covid-19 and they are asking their tenants to submit “comprehensive supporting evidence” of both their own and their guarantor’s finances if they wish to gain this support.

An extract from Manor Villages’ website says students’ applications for support will be made on a case-by-case basis by the company’s directors.

However, this support has been described as “useless” by a student who has been offered a rent payment scheme by Manor Villages.

The student previously relied on money from work to fund his degree (as he is ineligible for loans from SFE). He says his financial difficulties, heightened by the Covid-19 outbreak, have taken a toll on his mental health.

Manor Villages is still requiring him to pay full rent, without reduction, before the end of July; the payment has simply been split up into three parts of £578.65, the first of which is due immediately. 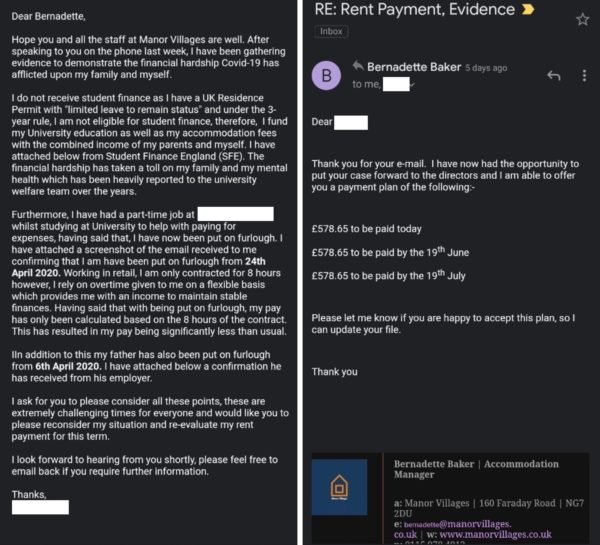 The student’s case in full and Manor Villages’ offer.

Due to being furloughed and without the ability to work over-time, the student does not have the money to pay his rent. “This situation is going to affect people in the long term for more than the three months extension they have given [me],” he said, referring to the new July rent deadline.

He informed Manor Villages that he would be unable to make any of the payments they have asked for, seeing as he is unable to work or gather finances through any other means by July.

Manor Villages wrote back to inform him that they will be passing on his file to their legal team. The student will now likely incur more costs, despite already having no available funds. 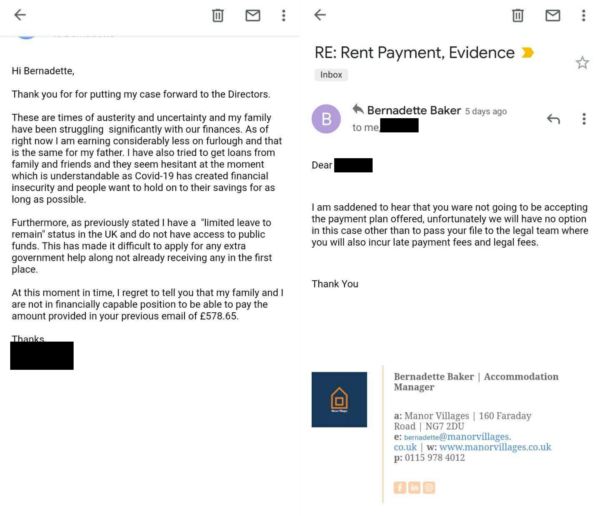 Further emails exchanged between the student and Manor Villages.

A student, also struggling with paying rent, claimed: “[A member of staff from Manor Villages was] speaking to me in such a manner I wouldn’t speak to anyone with in my wildest dreams.

“She explained how a majority [of tenants] had paid their rent and I said that I am glad the vast majority have not been affected by the Coronavirus impact on employment.

“She then laughed and said it’s not Manor Villages’ problem as I’m bound by a contract.”

The member of staff then hung up on the student when asked if she had “seen the news at the moment.” 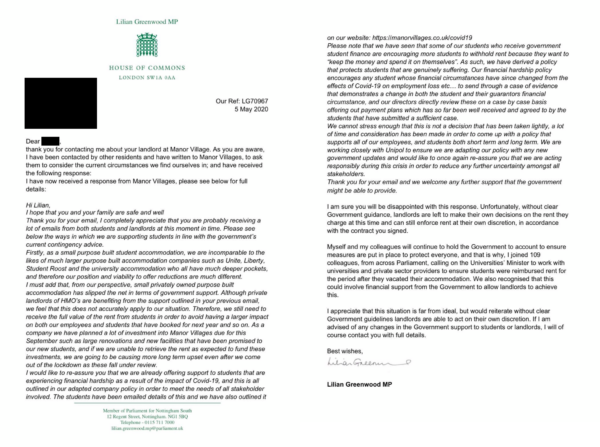 The full statement made by Manor Villages in response to local MP Lilian Greenwood.

The tenants, who were otherwise careful with their words, describe Manor Villages as “inconsiderate” and “unethical”, saying that the accommodation providers have “exacerbated the emotional distress” caused by the Covid-19 pandemic. “If you are a student considering Manor Villages…change your mind,” said a current resident.

Due to the Covid-19 pandemic, under instruction from the university, many students from Nottingham have moved back home and are continuing their studies online. This has prompted many student accommodation providers across Nottingham to waive the debts of their tenants.

The Nottingham Tab reached out to Manor Villages for comment about the students’ allegations, however, they are yet to provide a statement.