A Nottingham Trent student has been suspended for taking a picture with a sleeping Orthodox Jewish man on a train and photoshopping a Palestinian flag on his mouth for his Tinder profile.

When asked by The Nottingham Tab about his decision to include this picture on his Tinder profile, Jonathan said "that was indeed a terrible picture, absolutely insensitive and should not have been taken in the first place."

He additionally said: "I should also mention the fact that I am in no way antisemitic or have any kind of prejudice towards Jews." 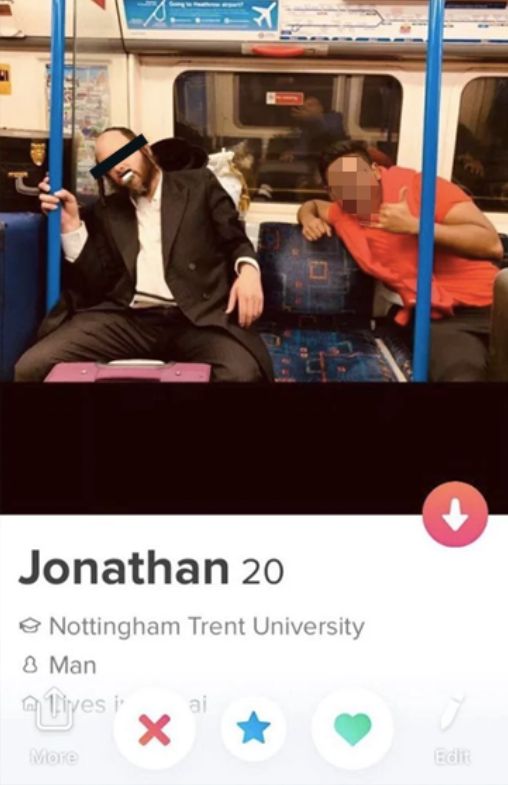 Jonathan's Tinder profile picture was first discovered on a Twitter post by Jess Talarico Shaw, a Jewish student studying Theology at the University of Cambridge.

When probed about the inclusion of the photo on Jonathan's profile, Joshua Caplan, president of the Nottingham Trent Jewish Society, said he was "incredibly disappointed to see a photo of that nature associated with Nottingham Trent University."

Joshua told The Nottingham Tab that "antisemitism is unacceptable and we welcome the University’s swift launch of an investigation. We will be working with the Union of Jewish Students and NTU to make sure there is no place for antisemitism at our university."

On Twitter, an NTU spokesperson confirmed the university is investigating. They said: "We have been made aware of this post, and can see that NTU is mentioned in an individual’s personal bio. NTU takes all allegations of hate crime, including anti-Semitism, very seriously, and is looking into this matter as a priority."

Daniel Kosky, Campaigns Organiser of the Union of Jewish Students, a student body representing Jewish students in the UK, told The Nottingham Tab: "We are disgusted by what appears to be an antisemitic photo circulating online.

"There can be no place for antisemitism in society or on campus, and we are working with Nottingham Trent Jewish Society to ensure this situation is swiftly dealt with. We urge any Jewish students at Nottingham Trent University to contact their J-Soc, UJS, or CST if they have any concerns or would like support."

In a statement, Nottingham Trent University told The Tab: “We launched an immediate investigation the moment we were made aware of a screengrab circulating on social media, in which NTU was mentioned in a personal profile.

“We are dealing with this matter urgently, and an investigatory officer has already held an interview with an individual who was about to begin his first year of study here. This individual has been suspended from the university pending the conclusion of the internal disciplinary process.

“We are proud of our diverse and inclusive community and do not tolerate any form of hate crime, including anti-Semitism.”

If you have seen or heard something blatantly anti-Semitic at University, call the CST Emergency Number at 0800 032 3263 or email [email protected]