‘The left is using blacks’: What happened when the right-wing circus came to Notts

100 students turned up to the Turning Point UK event in Notts. It got weird

As an American with nearly a million Twitter followers is getting ready to talk to a bunch of Notts students weirdly interested in politics on a Tuesday night, a security guard turns to him and says: "We're expecting a lot of aggression tonight."

Turning Point are seen by political commentators to be the youth wing of American conservatism, and now they've come to the UK.

Except their UK launch was pretty disastrous. They got absolutely rinsed on Twitter, one of their star UK "influencers" quit, and they had to clear up that they wouldn't be doing protests in nappies.

Make sure you watch this video and follow @TPointUK! pic.twitter.com/nbOBMXaOjP

This Notts event was originally meant to be at UoN and hosted by NUCA. Except when neither the uni nor the Tory society knew anything about it, they had to refund tickets and find a new venue. So I find myself at the Nottingham Conference Centre, right next to Trent.

Outside, young and old protesters are holding up Socialist Workers Party banners and anti-fascist posters, telling me I should cover a “proper event”, when they see my camera.

Another day, another all-white group of progressives protesting my events in the name of “racism”.

This time from the UK!

Spoiler alert: they eventually admit they are just anti-Trump.

White liberals are racists who use black people as shields to mask their hate.@TPointUK pic.twitter.com/JrVoS0dDE3

Walking into the building, one of the Turning Point UK team says to me: “get much harassment outside?”, as if it was just expected that tonight was going to be beefy.

On the way to the conference room, I overheard one of the TPointUK’s security team prep talking Charlie Kirk, the founder of Turning Point USA, which has over 230,000 followers on twitter. “We are expecting a lot of aggression tonight”, or something along those lines.

I'm told there are about 110 people in the room. It's a diverse crowd, and everyone's paid their £5.29 to be here. A few students seem to be part of Turning Point, but not many. People from the protest are even invited in, where they see four stools and some banners with red, white, and blue TP branding. 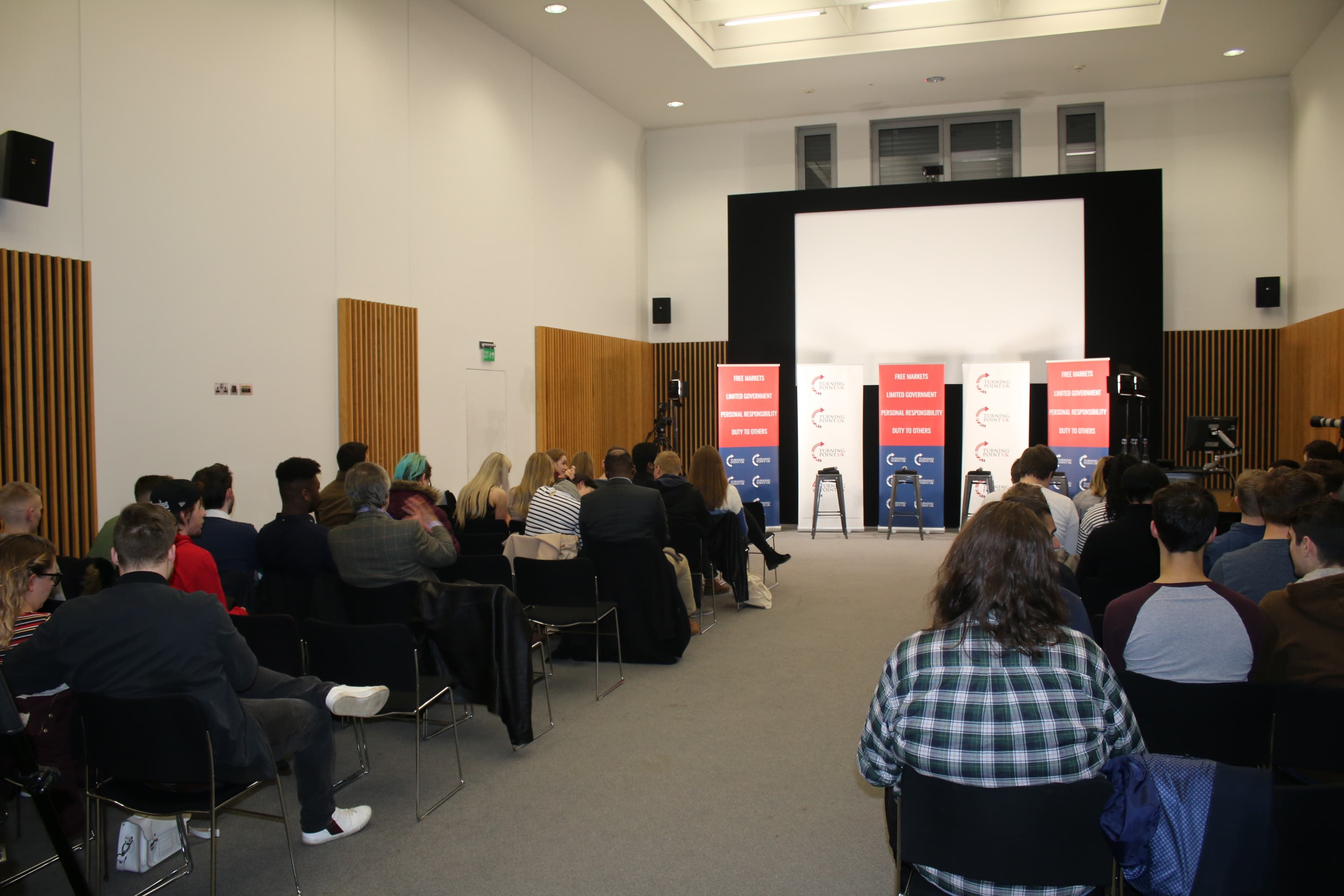 The first part of the talk was by Candace Owens and Charlie Kirk, the hot-shots of The Turning Point that bought the organisation to fame, who warned us about the radical left wing. Last month, Candace found herself in hot water after it was revealed she said: "If Hitler just wanted to make Germany great and have things run well, OK, fine. The problem is that he wanted – he had dreams outside of Germany" at the TPUK launch event. She said she was just addressing the "really wrong" identification of Hitler with nationalism, but she's on calmer form tonight. 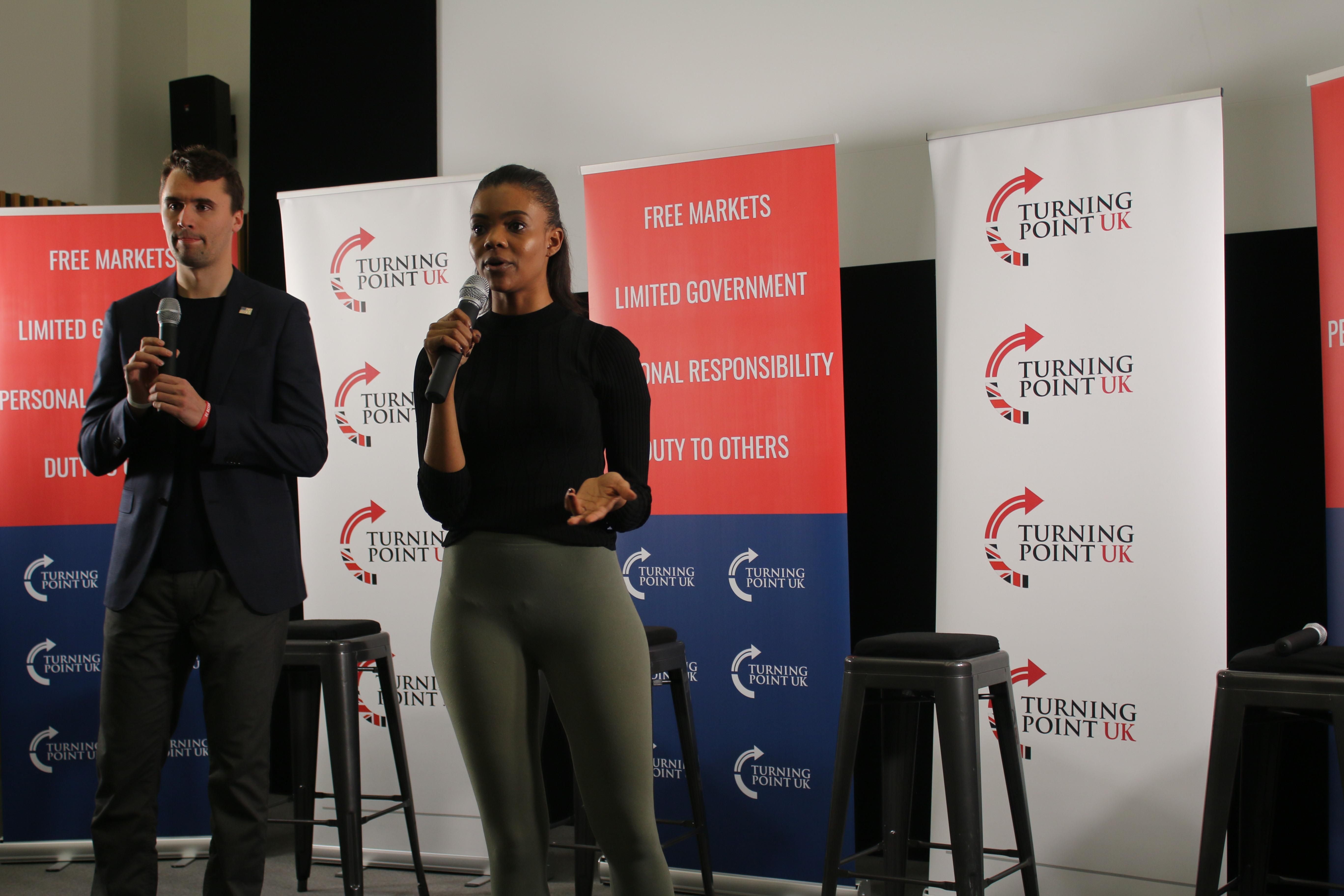 Describing what the group view as left-wing "virtue signalling", Charlie Kirk claimed that the left wing “don’t care about racism”, suggesting that anti-racist protesters do it because “it makes them feel like supermen”.

Candace Owen said that there were no black people in the protest outside, implying that their campaigning outside was superficial.

Never one to miss a point, Kirk adds that “left would rather protest something that is not actually happening” and that “the left is using blacks”.

Offering a stolid warning for those that fear racism, he also said that when “everyone is a Nazi” this “cheapens true racism”. 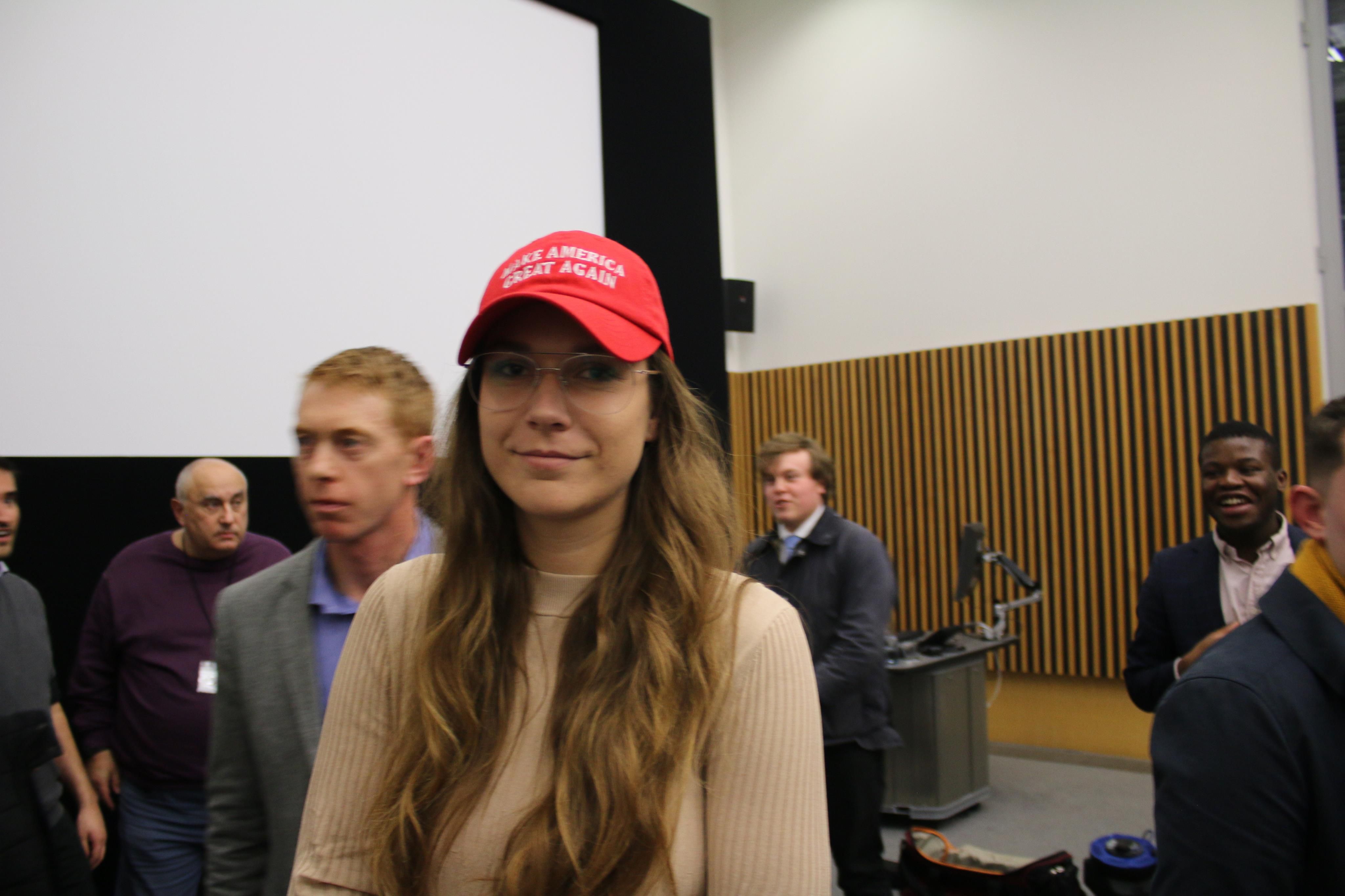 Who The Left specifically are was not discussed in the talk. Every strand of left-wing thought was thrown into an ideological bloc they called “socialism” or “The Left”. Thankfully at least when the TpointUK team were invited onto the panel alongside Kirk and Owen, some more nuances of the group's own position were revealed, with the overall dislike of "big government."

I ask a question about whether government spending is needed to spread opportunity around. Charlie hands the microphone to Candace – “someone who has actually been there”. Drawing on her background as a relative of sharecroppers, she says there are no excuses for people, as her family used determination to rise from poverty.

After the politics chat, the fun started.

The group opened the stage for criticisms as well as any bum-licking comments – although, credit to them, they invited the criticisms up first. Initially, the comments made were relatively mundane, progressing into a nuanced debate about the pros and cons of free-market economies. 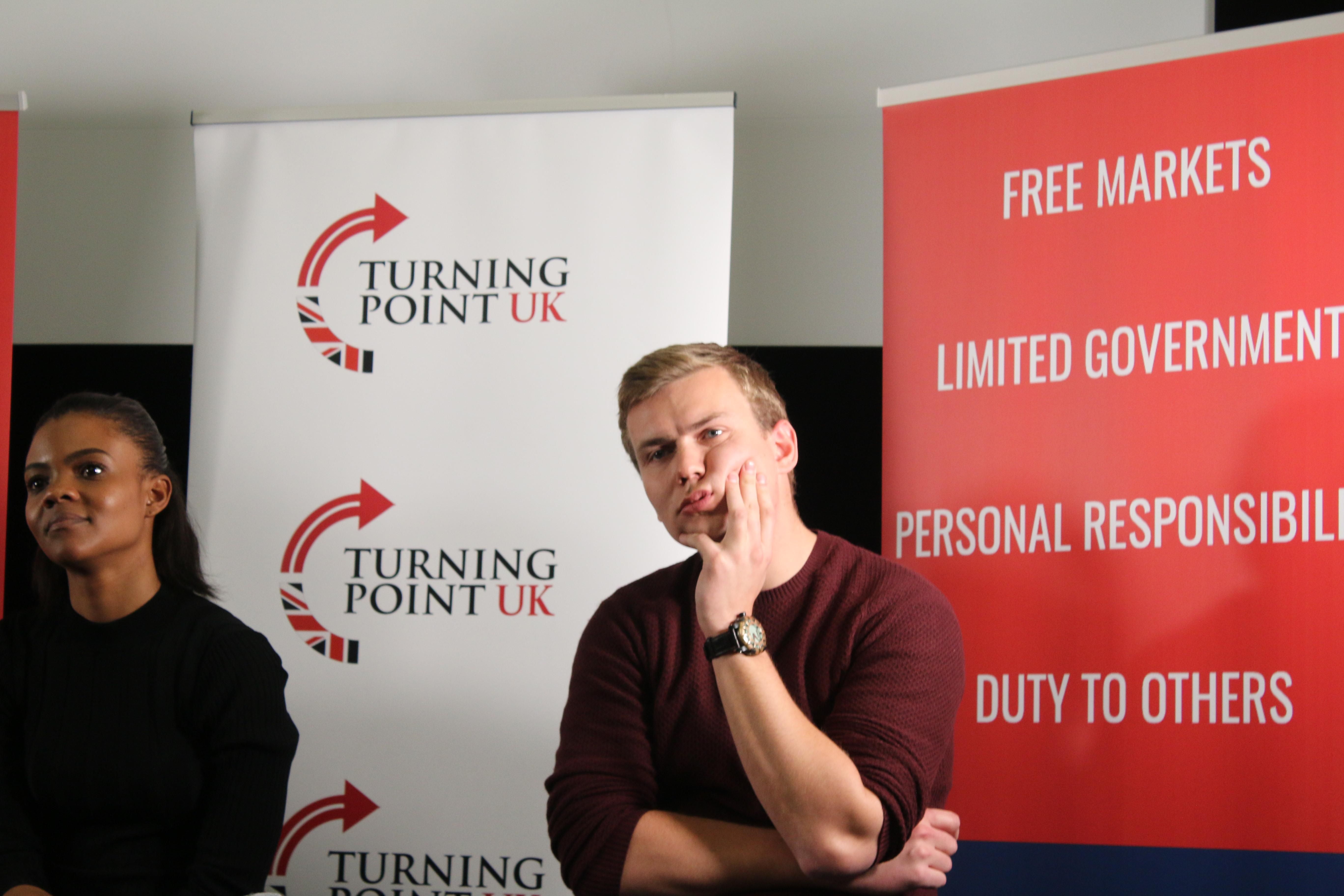 But not before long, things really started to kick off and I got some insane shots of an angry Candace Owen, a sarcastic Charlie Kirk and a confused TpointUK team.

One guy, clearly not the biggest fan of Trump and American politics in general, criticised the American intervention in the Middle East. The comment created a shouting match between himself and the entire panel. Kirk suggested that Trump has helped with the Middle Eastern peace process, while the questioner refused to acknowledge that America had pulled out of Afghanistan under Trump.

The angry face of Candace Owen, responding to comments just says it all. 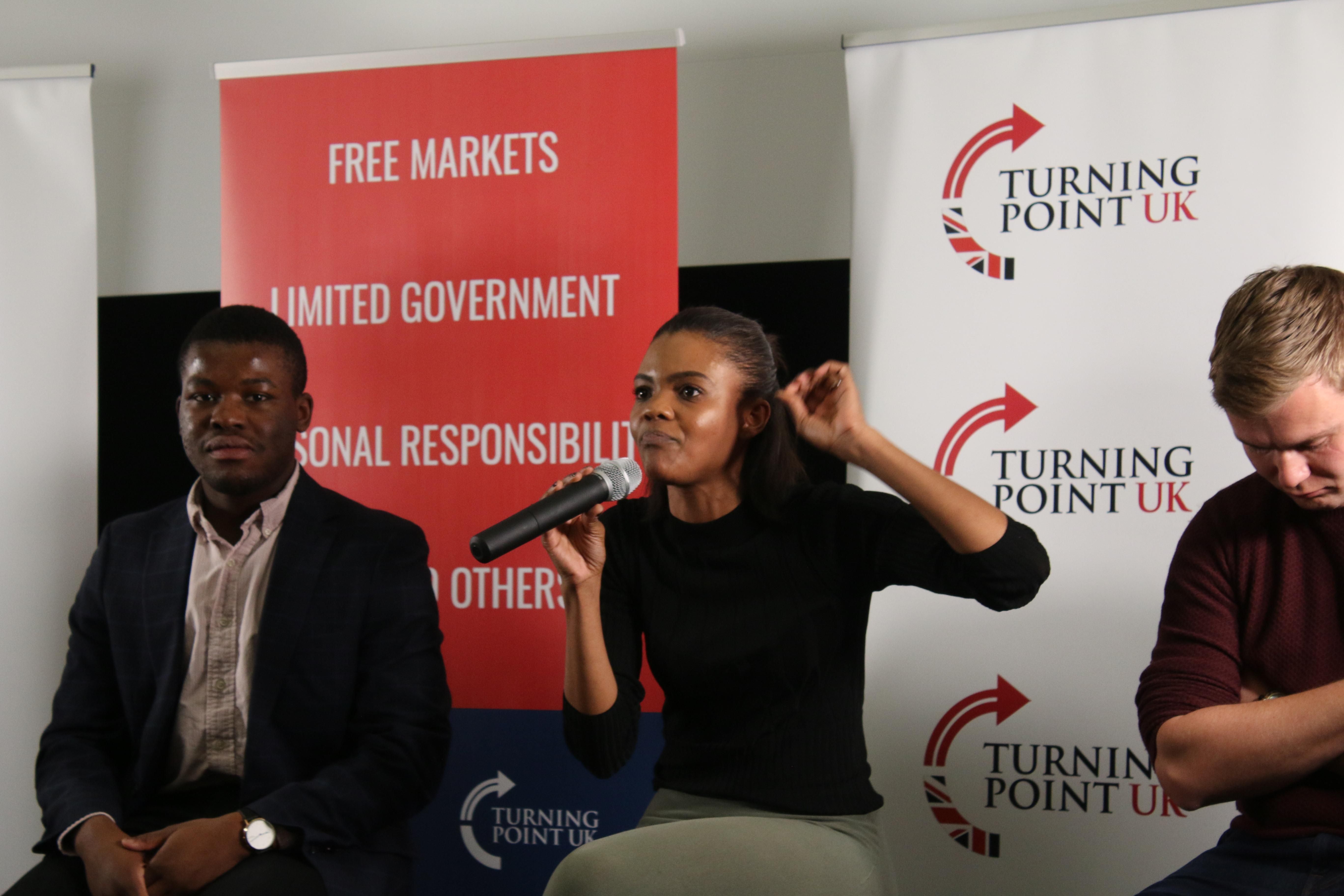 TPointUK team alongside Candace Owen, Joel Chilaka on her right and the son of a Conservative Lord on her left

Unfortunately, the speaker was shouted down to some extent by loud laughing and cheering and clapping in the audience. Two hecklers even complained, shouting in a raspy northern accent: “Give the kid a chance. You say you advocate free speech, so let him speak”. 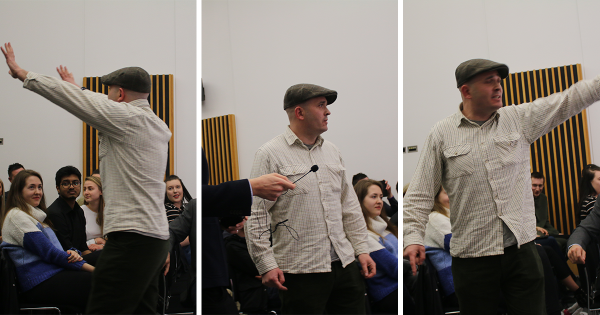 However, the heat really started when one protester from outside moved to the front. In a kind of animated, Lenin-like speech, a bald man in a chequered shirt and a flat-cap gave as much flak as possible to the Turning Point. In the angry speech, he said "we are going to put our hands around your throat".

Videos weren't allowed in the venue, but I got one anyway.

Moment a protestor from outside is called to the front to debate @TPointUK talk last night! It gets so beefy @UKLabour @Independent @Telegraph @BBCPolitics @GdnPolitics @GregBarradale Protestor says: "We are going to put your hands around your throats" speaking metaphorically? pic.twitter.com/XDKq0owyiZ

I later found out from protestors that he was a close associate of Greg Marshall – the Labour candidate for Broxtowe who will be contesting with Anna Soubry in the next general election.

“Why are the comrades always so angry” Charlie Kirk sarcastically commented.

The night ended with me going outside and speaking to the remaining hardcore protestors outside of the conference building.

One unnamed lady I spoke to who seemed to be in her mid-30’s, with pink highlights and a parka, said to me “they’re just a big joke”. “The group are even seen as a joke among Tories.”

Another girl from Nottingham Trent University could not believe that Nottingham Trent, whose security were used to safeguard the event from protestors, did not No Platform the event. She compared the views of the TPointUK to the boys from Trent who were caught chanting racist profanes in one of Trent halls, claiming that many of the Turning Point had been racist on social media.

Although the event was heated, the mood was calmed as the protester shook hands with Charlie Kirk at the end of the evening.