The Complete University Guide has released their 2018 league tables which see Nottingham rise three places up to 18th. This jump up from last year’s ranking of 21 means Nottingham is back in the top 20 universities for the first time since 2013.

Our new place in the table puts us just below Bristol, and above other top unis like Edinburgh, Manchester, and King’s College London. Cambridge and Oxford obviously took the top two spots in the table, which is based on scores for entry standards, student satisfaction, research quality and graduate prospects. 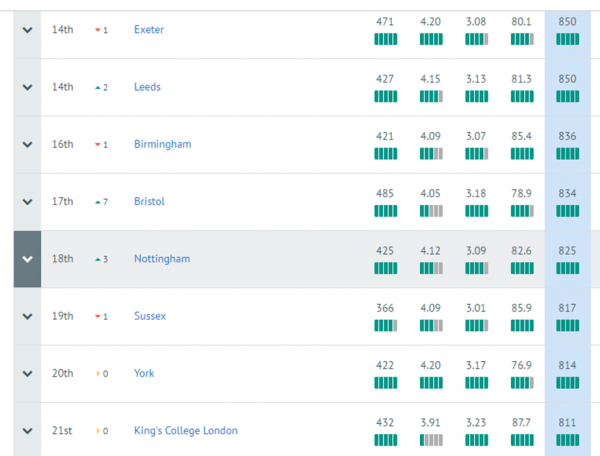 We also ranked first for MA Nursing and Agriculture and Forestry and made the top ten for key subjects such as English, Economics, and Law.

Our highest score is for student satisfaction, rated 4.12, which is roughly the same as Oxford and Cambridge, and higher than several in the top 10. The data for this number comes from the 2016 National Student Survey, which is open to final year students, and has been boycotted by many at Nottingham this year, something that is likely to affect next year’s ranking.

You can find the full table and individual subject league tables here.