Bee aware: Nottingham to be stung by wasp invasion

It is supposed to be a relaxing afternoon in the park with your friends to celebrate the end of exams.

But prepare yourselves for the horror when you will be stung by one of the thousand wasps descending on Nottingham this summer.

Experts have predicted a soaring number of winged menaces expected to invade the city.

If you don’t beelieve it, the terrifying news comes from a survey issued by British Pest Control Association.

They explained that Nottingham City Council was called to deal with wasp and bee issues a stinging 929 times in 2013-14, which was an increase on 514 times the previous year.

Experts say the rise is due to the strange weather we’ve experienced this year that saw freezing temperatures closely followed by unusually hot days.

Dr Tom Reader, a lecturer in Ecology at the University of Nottingham, said: “We’ve had a warm spring which means wasps come out a bit earlier.” 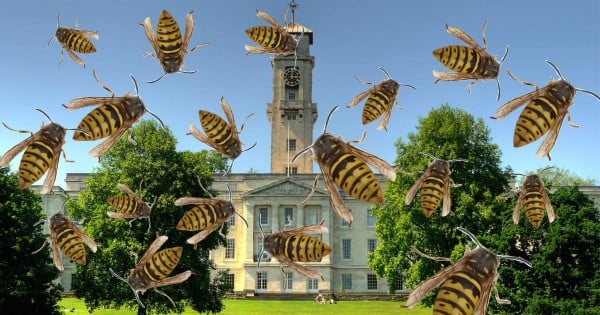 Dr Christopher Terrell-Nield, an entomologist at Nottingham Trent University, added: “It is very likely we’ll see more wasp nests this year, unless we have a cold wet summer.

“The winter was quite mild which kept the wasps fairly quiet and meant more survived.”

Jason Downing, who works at Pulse Pest Control in Long Eaton, said he had two wasp problems this week alone which also included a loft filled with about 30 queens. Although he said the problem was easily dealt with, hopefully he isn’t pollen our leg.

So if you’re buzzing for Summer, hope these pests just let us bee for the last few weeks of term beefore we get the hell away from Nottingham.