Tickets for the ever popular varsity clash were due to go on sale at midday on Monday, but due to the unexpected demand the Union’s servers crashed. 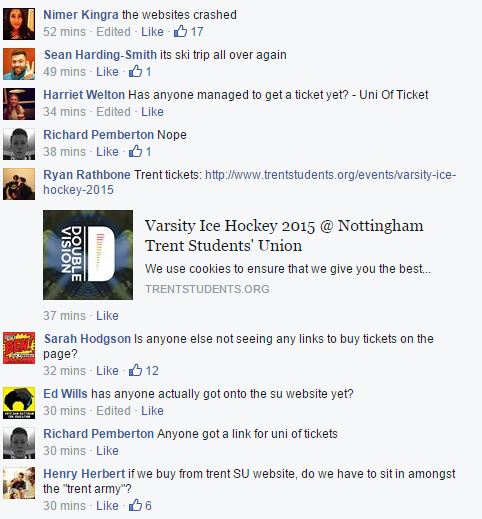 The technical problems lasted for over an hour, with little guidance as to what was happening.

The fiasco comes after the SU rearranged Varsity to land in between dissertation hand ins and exam season.

SU sports officer Kiri Madhani eventually updated the hundreds of hockey-hungry sports fans, but for many it was too late.

As soon as the site was working again, many found themselves unable to purchase tickets with the enigmatic “group item limit reached” message flashing across their screens.

Third year Ben who was gutted to miss out on tickets told The Tab: ” I was refreshing from exactly 12pm and missed out on getting even a single ticket.

“This is my last varsity ever and to be honest, I’m crushed.”

Just up Derby road however, things went off without a hitch. Trent students were able to buy tickets from 10am with no drama to speak of.

The sell out Ice Hockey event is for many, the highlight of the Varsity series and is the biggest event of its kind outside of North America.

Tickets are still available in the neutral section of the Ice Centre. They can be bought for £11 + booking fee direct from the Ice Arena box office.