Last night a Northumbria law student posted a series of videos on her Instagram story featuring her boyfriend, a well known personal trainer in Newcastle, making racially abusive remarks among other inappropriate comments.

The student, Melis Altinors, recorded the videos and is seen to be laughing along to the comments made by Richard Heslop, a personal trainer in Newcastle.

“Fuck everyone. Fuck them Ch*nkies, fuck them P*kis. I’m rich, white and privileged. I’m tanned and fucking got good teeth.”

“They [nurses] sit on their arse half the time when it’s not a pandemic.”

“You grow up as a little bairn, you want to be a nurse, you don’t think of a global pandemic, you think of a good pension from the NHS and a little outfit.”

Altinors furthermore is seen to ask Heslop: “you want to shag four year olds?”, to which he responded: “It’s not that bad. Close your eyes.”

Newcastle Benfield Gym published this statement on their Facebook page: “It has been brought to our attention that one of our PTs that worked out of our gym has made a careless error in judgement and posted a video to his social media, that whilst he deemed to be humorous, has caused offence.”

“We would like to stress that WE DO NOT condone the type of comments or behaviour portrayed in the video concerned. His actions DO NOT reflect the views of this gym, it’s staff or its members, and in light of this we have decided to terminate any future dealing with this PT with immediate effect.”

The Newcastle Tab spoke to Heslop’s ex-business partner, Alex Parr, who said: “I am appalled by the video and absolutely cannot condone it.”

Following the negative attention on social media, Heslop and Altinors have both deactivated their social media accounts.

Screenshots of Heslop’s Instagram story prior to deactivating his account with 16.5K followers have been posted on Twitter: “I think by the tone of my voice on that vid you realise I’m impersonating someone and you can tell I’m not being serious.” 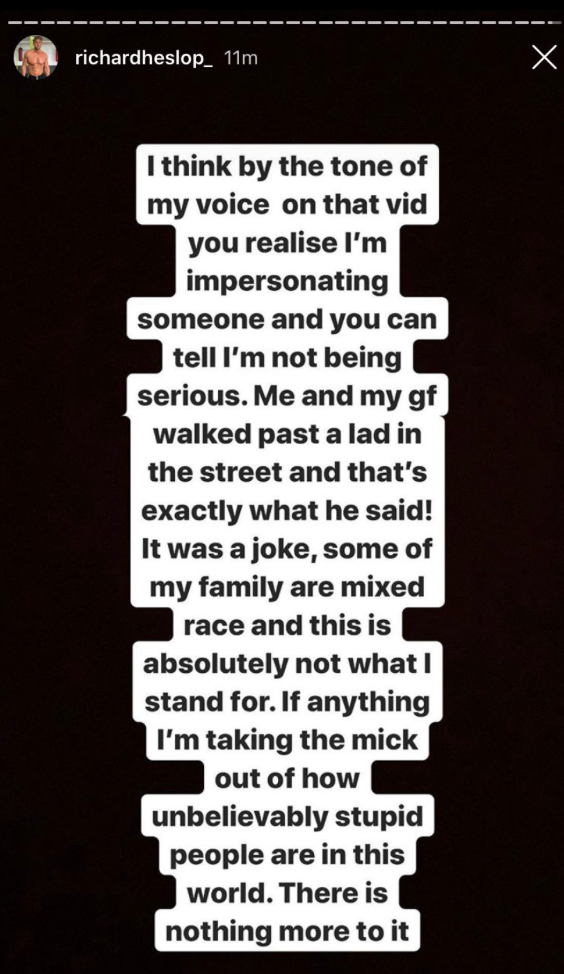 This statement contradicts the video, in which Heslop said: “I’m sorry and I apologise to absolutely nobody.”

Altinors responded: “But what you said might offend some people”, to which he replied: “Come to my door and say it to my face. I bet you wouldn’t because I’d eat you.”

Northumbria University has responded on Twitter, disclosing that the incident has been reported to Northumbria police. The University is additionally undertaking an internal investigation to take appropriate action against the student in question. 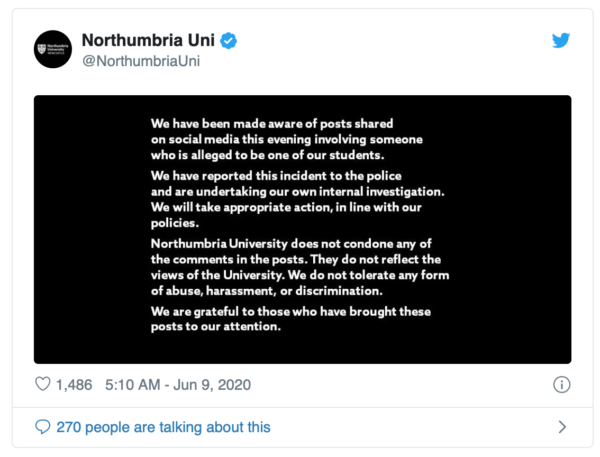