It will take place next year instead

The organisers of UK Pride which was scheduled to take place this summer in Newcastle, have announced that the event has been postponed until 2021.

In a statement on Twitter, Northern Pride described how the decision was “heart-breaking”. The statement continued adding that, “We have have to take this action to ensure we protect and keep our community, service providers, emergency services, and our team of volunteers safe during this pandemic”.

Northern Pride thanked Weston-super-Mare who were scheduled to host UK Pride in 2021 postponing their event until 2022, in accordance with the measurements put into place, to postpone the Newcastle instalment of UK Pride. 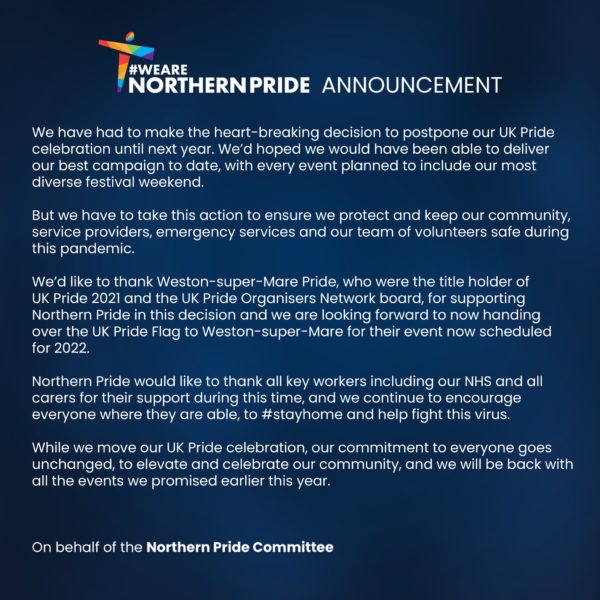 UK Pride has been cancelled as well as a number of other celebrations, such as Brighton Pride

The statement joined in with celebration and praise for key workers across the country, adding that, “Northern Pride would like to thank all key workers including our NHS and all carers for their support during this time, and we encourage to everyone where they are able, to #stayathome and help fight the virus”.

In a statement, Nick Forbes from Newcastle City Council described how we was, “Very saddened to hear of the reluctant postponement of this years UK Pride” but that it was, “unavoidable in the current circumstances”

Forbes digressed, adding how the event which last year welcomed 78,000 people to Newcastle, as being one of the, “highlights of the year, not just as a fantastic, colourful celebration of the LGBT community in our city, but as a symbol of the diverse, open and inclusive city we are”.

He said: “Pride wouldn’t happen without a dedicated team of organising volunteers, and I know they will be gutted by this decision”

“I’d like to pass on my sincere thanks and gratitude to each and every one of them for their hard work to date”.

The council leader concluded, also acknowledging the key workers who are doing everything they can during the global pandemic, which 252 Geordies have now tested positive for.

Newcastle University Equality and Diversity Representative, Nadia Sara Ahmed said, “Pride is such an incredible event which celebrates LGBTQ+ identities and I’m absolutely devastated that it won’t be able to be go ahead this year. However, it’s very important for everyone’s safety that this is postponed for now. In true Newcastle style I’m sure we can come together and create the biggest and best pride next year to make up for this loss”.

With Northern Pride and a number of other demonstrations starting to be cancelled such as Brighton Pride, it raises questions about how long the lockdown will take place, as the nation continues the fight against coronavirus.