He downs a pint from a wheelie bin

A video has been posted on Castle Leazes Ticket Exchange of a man wearing a balaclava sneaking down the back of Bayswater Road.

He works his way down the alley before leaning into a wheelie bin, taking out a pint and seeing it off like a true Newcastle legend.

The full video can be seen on The Newcastle Tab Instagram story.

The video comes after a series of posts on Leazes Exchange over the last week from students who have seen a mystery man hanging around West Jesmond alleys.

One witness told The Newcastle Tab that they had seen the man near their house on Glenthorn road. He said: "I tried shouting at him and he went away for a few minutes. He came back so I called the police.

"He had a grey jumper, black trousers, blonde hair and a bit of a beard. He was quite tall and skinny.

"The police told me they thought it was just a drunk student." 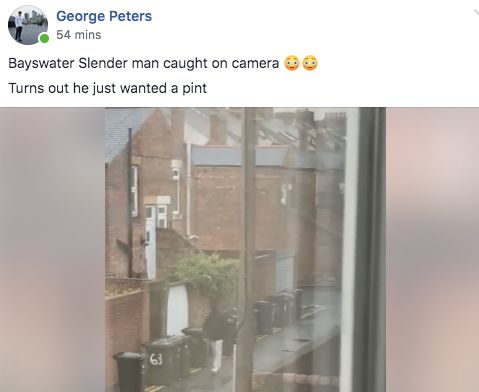 Another concerned student said that he had seen a man hanging around in the same area. He told The Tab: "I was heading to West Jesmond metro and noticed a fella try and get into a house along Lonsdale Terrace on the corner of Bayswater.

"He kind of just tried the handles of car doors as he walked past then when neither of them opened he stopped on the corner of Bayswater and Lonsdale."

The Newcastle Tab got in touch with the guy who posted the video to ask him who the man of the moment actually was and he revealed it was himself.

He told The Tab: "It's me. We have a course ball today and it’s tradition on the day of the ball for everyone to film themselves downing a pint and put it in our Facebook group".

There is of course, still a mystery man lurking around West Jesmond which is causing safety concerns for students.

If you do have any information then get in touch. Drop us a message on Facebook or Instagram.