Why I think the Conservatives are evil

Another opinion in The Tab Newcastle election series

The election is rapidly approaching. On the 8th of June, the whole nation will take to the polls to decide the next five years of government. The Conservatives are poised to claim not just a majority, but a landslide unseen since the Blair years. This would prove a disaster for many parts of society; for some, it may even be the finishing blow. There may be no way to prevent the cataclysm to come, but affirmative action now will lay the foundation for future elections. Here are the main reasons the Conservative Party does not deserve your vote:

Probably the greatest injustice committed by the Conservatives, the NHS has been worn and eroded by incessant cuts and pernicious policy altercations. Since gaining power in 2010, the BBC have verified that 6,700 staff have been removed from the NHS mental health department alone. Cuts like these are not tragic simply in of themselves. The consequences have been devastating, with an estimated 30,000 people having needlessly died due to conservative cuts. Couple this with a fall of 12% in wages for doctors and nurses as well as increasingly strained and antisocial hours and you have a formula for eventually destroying the NHS entirely. Historically, Britain has been one step ahead on healthcare ever since the NHS’s inception in 1948. It was a milestone. What was called the ‘cradle to grave’ system of welfare set the bar for what the state could and should achieve for its patients. Let’s not turn out backs on it now. 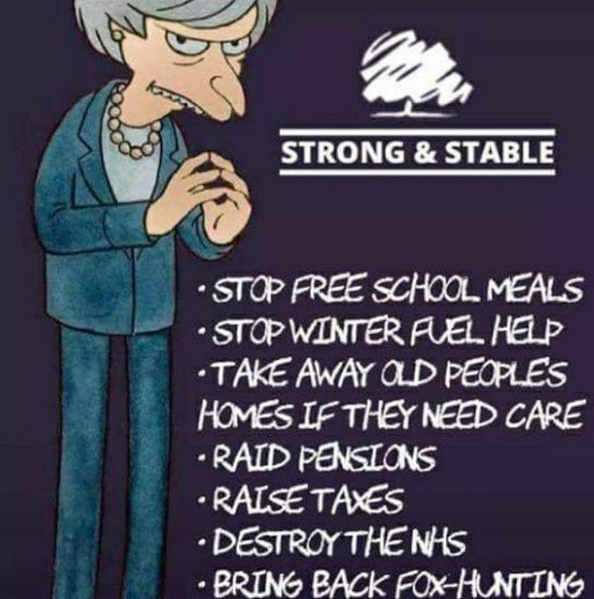 They are funded by the super-rich

Who truly rallies behind the Conservatives? It recently surfaced that over 1/3 of the UK rich list has donated to the Tories since 2001; a staggering but perhaps unsurprising figure when considering the size and breadth of tax cuts extended by the Tories to the largest and most powerful organisations the world over, at an already staggeringly low 17%. This appeasement will only continue into the future, with £7.5billion in corporate tax cuts planned for the next government.

Theresa May happily touts the misnomer that a conservative majority will ‘strengthen her hand’ in the upcoming Brexit negotiations. The fact is that the EU, regardless of what the UK thinks, is pushing a project essentially to save its own skin and prevent further disintegration. This means punishing the UK in any way it can to stop other countries leaving. The recent election of Emmanuel Macron in France has only reinforced this; a bitter contempt for the UK will prevail no matter how large the Conservative majority. Even the President of the European Commission, Jean-Claude Junker, has recently refused to speak English publicly anymore. If the EU negotiations are swaying you to vote Conservative, remember that she has as little chance as anyone else to achieve a favourable deal.

Ethical issues of charging students for higher education aside, the Tories have taken student debt to stratospheric new levels that now sit at over £9000 a year. By putting a price on degree-level education, the young become straddled with debt at a time when it’s already hard enough to take out a mortgage, borrow for an investment and so on. If you thought this was the end of it however, you should be wary to give them the benefit of the doubt, especially when they refuse to rule out another rise in the future. 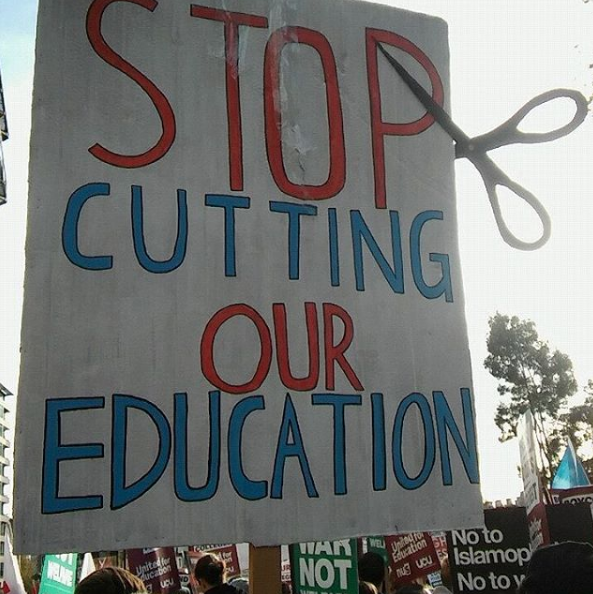 You would think that Theresa May would be aiming to dispel any stereotypes about the Conservatives being cruel and archaic. Boom. Fox hunting. That should fix it.
It’s not even so much the fact that they’re reviving a cruel blood sport at a time when other priorities ought to take precedent. It’s that they think it will help their chances.
Of course, there is always the silver lining of it working against them, as indeed some believe it already has.

The Conservatives will break up the United Kingdom

The SNP appears to have a firm grasp on Scotland, capitalising on the failure of Labour and the Scottish desire for a strong left-wing representation. The Conservatives’ refusal to accommodate Scotland’s wants at a time when Labour is completely emaciated will almost certainly lead to a second Scottish Independence referendum. Add to this the impact of Scotland’s desire to remain in the European Union and Scotland appears bound to leave the UK.

If, as the polls and local elections foreshadow, Jeremy Corbyn cannot reach the level of support that Ed Milliband did in 2015, he will be forced to resign. Even if he exceeds Miliband’s modest 31%, it may not be enough to secure his position. The Labour Party will then likely select a more central leader going forward. If you appreciate the new direction of Labour under Corbyn, it is essential to support it regardless of whether it will win the election this time around.

The Tab Newcastle are looking for YOU to get involved with your thoughts on the upcoming General Election on June 8th. Please send the send The Tab Newcastle Facebook page a message or email newcastleeditor@thetab.com and you could be featured on The Tab!

There has been backlash on Twitter over Newcastle mumps thread

Not everyone saw the funny side

Sorry, but being broke at uni doesn’t make you working class

We’re not all in the same boat