I know what you’re thinking: the Computer Science bar crawl sounds more like an oxymoron than a great night out, but it truly was the number one highlight of the social calendar.

Six bars long, beginning at Mens Bar and ending at Rustys, it could only be described as an ‘R-Rated Year 6 Disco’. It answered the age-old question, “What makes the perfect bar crawl?” with the words “low expectations and free booze”.

However, this year a new committee – seemingly intent on promoting themselves – decided to butcher the sacred route. The legendary bar crawl was replaced by a 2 hour ‘meet the committee’ session that involved the committee gathered around one table ignoring the new members, followed by a crawl consisting of a couple of bars and a trip to Digi Mondays, a night that most freshers would have experienced before.

Astonishingly, this sorry excuse-for-a-crawl meant that four bars had to be axed, but fortunately this blow was cushioned by the fact that if you turned up early enough you got a free glow stick! 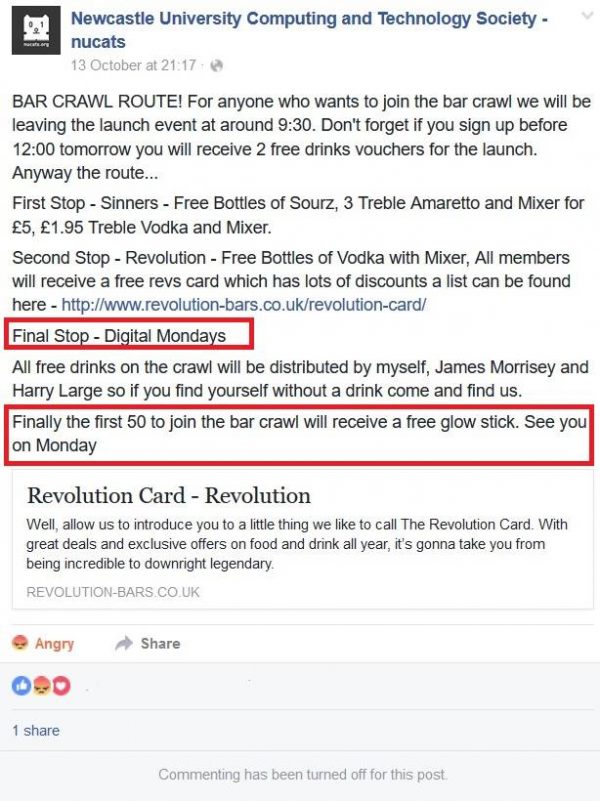 To add insult to injury, our new representatives that care so deeply about our feedback, promptly deleted any negative comments regarding the ‘bar crawl’.

Consequently, a small but driven group of revolutionaries took it upon themselves to arrange a counter bar crawl. A crawl reminiscent of the good old days, a crawl that gave freshers a taste of Newcastle, a crawl for the people! Once again starting at Basement, Computer Scientists would this time stagger through Sinner’s, Mushroom, Mono, Soho Rooms and Mimo’s before finishing at Rusty’s, accompanied throughout by a plentiful supply of free alcohol.

To the committee’s dismay, the event quickly gained popularity and before we knew it we were entering Soho with a crowd of around eighty likeminded Computer Scientists. 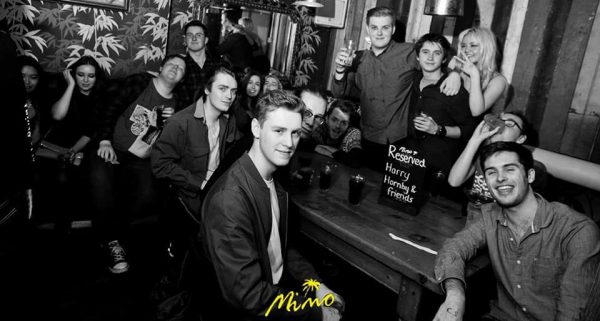 The event was a huge success with most people admitting that the crawl was much better than NUCATS’ attempt at a social, but this wasn’t about making a more successful rival bar crawl, this was about sending a message. 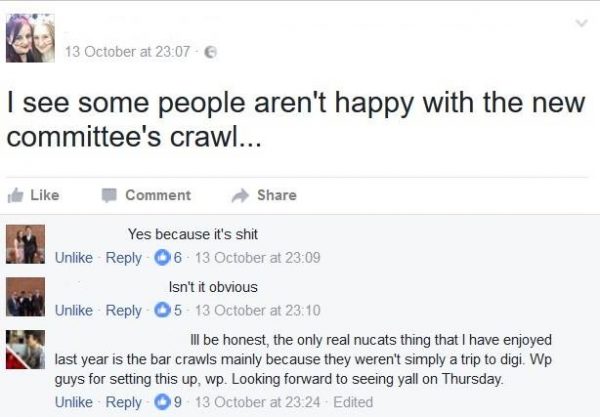 Also, adding a single bar at the last minute doesn’t quite cut it. 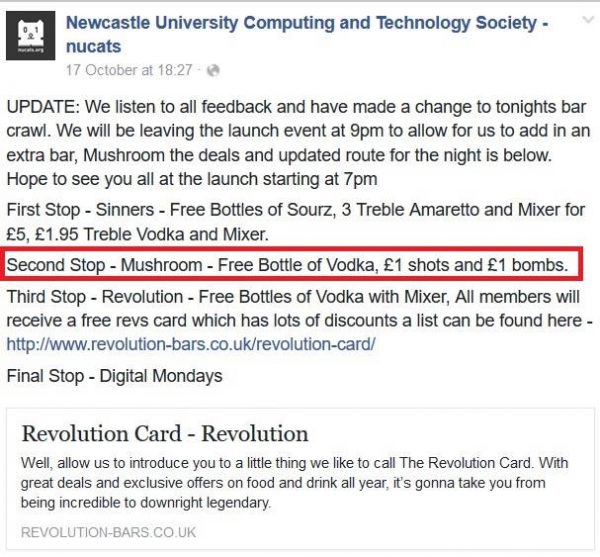 NUCATS: please make the bar crawl great again! In the words of full time politician and part time bar crawl enthusiast Abraham Lincoln: “A house divided against itself cannot stand.” Please consider keeping your dirty hands off our bar crawl. We are always here if you need our help.

You wanted feedback, and you got it. As if by chance, you were in Mensbar watching the event begin and witnessed a sizeable crowd arrive, including last year’s committee and some of your own. Surely you cannot ignore feedback forever?

Grace Gregroy has been crowned your 2020 fittest female fresher