Thousands of you voted, and this is Manchester students’ favourite club

The students of Manchester are known for their love of the sesh. They appear to go mad for literally any event involving two-for-£5 wine that tastes like nail polish remover, some mystery mind altering substances that were provided by a mates friend of a friend and a few other, cargo wearing, gremlins.

Over the last week, The Manchester Tab hosted a poll based competition on its’ Instagram story to determine which was the best club in Manchester. Over seven days 10,023 votes were cast. The way it worked was that each day two separate polls were posted and followers would choose which club they favoured from each, the club with the most votes after 24 hours would then progress to the next round to face another club, until the winners of each poll were then put against each other for the final. 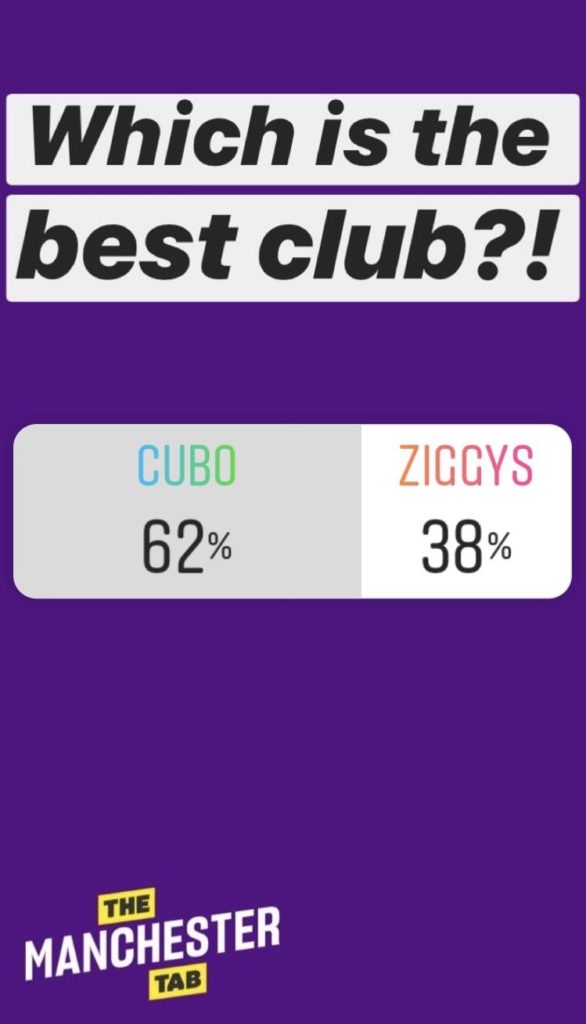 An example from round one, where The Ziggy Sixx Social Club was knocked out by Cubo.

After six days, where we saw favourites like Soup Kitchen, Academy and 256 be knocked out, the final between Hidden and 42s was held. It was extremely close, (45-55%) but in the end you all voted;

42s THE BEST CLUB IN MANCHESTER!

42s told The Manchester Tab; “We’re honoured the students of Manchester love 42s as much as we love them. They’re the reason we keep on doing what we do!”

Known for its’ fun atmosphere, cheesy throwback tunes and cheap drinks, 42s is always a good night out.

Hidden, the runner up, said to The Manchester Tab “please do pass on our thanks from everyone at Hidden to anyone who’s supporting Manchester nightlife at the moment.”

So there it is, beneath the edgy facade of your average Manchester student, is someone who deep down, is truly basic. Who, whilst alone in the countryside in lockdown when they believe that no one is watching them, is listening to Spotify’s ‘Early 00’s Bangers’ and sobbing whilst they look through photos of themselves in the 42s light tunnel.