According to the dictionary definition, a superhero is a “benevolent fictional character with superhuman powers, such as Superman”. However, it isn’t people like Superman who are here saving society. The people out here “saving the world” in this current climate aren’t wearing capes or a big S on their chest, instead, these people are wearing a nurse’s uniform or an ALDI polo neck. Where we don’t have our superheroes, we don’t have the vital services our nation needs to keep thriving through the outbreak.

Thinking about this I wanted to speak to some of the people that are classed as “key workers” and find out some of the realities of working through quarantine and by reaching out to their family members. , I also wanted to understand how working through quarantine has affected family dynamics and their understanding of the importance of staying at home.

I asked a multitude of questions about life on the front line, from the variety of stories I have been told it was clear that being a key worker is greatly rewarding. NHS worker Jane Robinson expressed how ‘grateful’ her patients are that they are still being able to be cared for within their own homes. She stated, “I found it difficult when I was first told I was going to be deployed onto the wards, however seeing how grateful my patients are and being able to reduce their anxiety is incredibly rewarding”.

When asked about how people in the workplace have come together in this turbulent time, I heard a range of wholesome anecdotes from “WhatsApp groups with nightly emoji quizzes” to “workers taking their lunch breaks at the same time, keeping the morale up by having a laugh to make things more bearable” according to second year Eve Talkowski who has been working shifts in pharmacy. 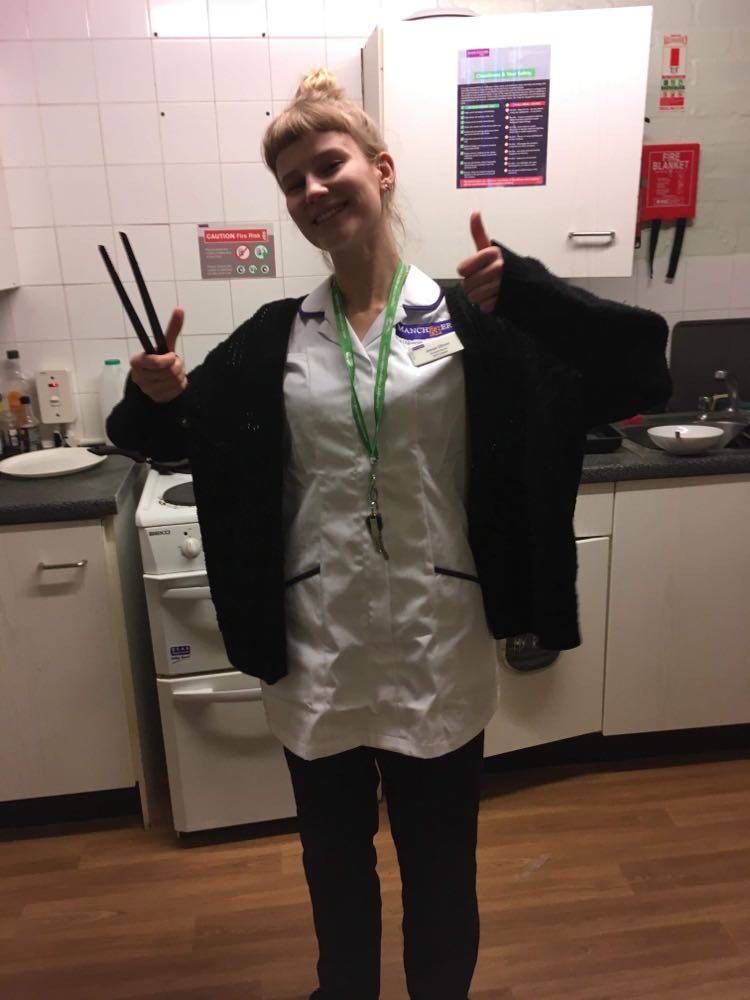 Jesse Oliver, a second year student nurse in her uniform.

Student nurse Jesse Oliver brought to light how incredibly hard our NHS staff have been working with staff happy to work in any area, she added “it was also clear that it was only a minimal amount of individuals who were fearful for their own health, through this selflessness and support that the NHS workers come together”.

“It’s sad that there is a great sense of the key worker being undervalued”, said Anisah Khan whose mum works as a Samaritan. The outbreak has “shown me how key workers are unpaid or underpaid yet they’re valuable and needed in society”. It’s somewhat worse in this sense that only now is the key worker being credited more than before. When speaking to English student Jasmine Asghar she commented that “it shouldn’t have taken a murderous virus to expose the importance of a worker who has always been vital within our society”. 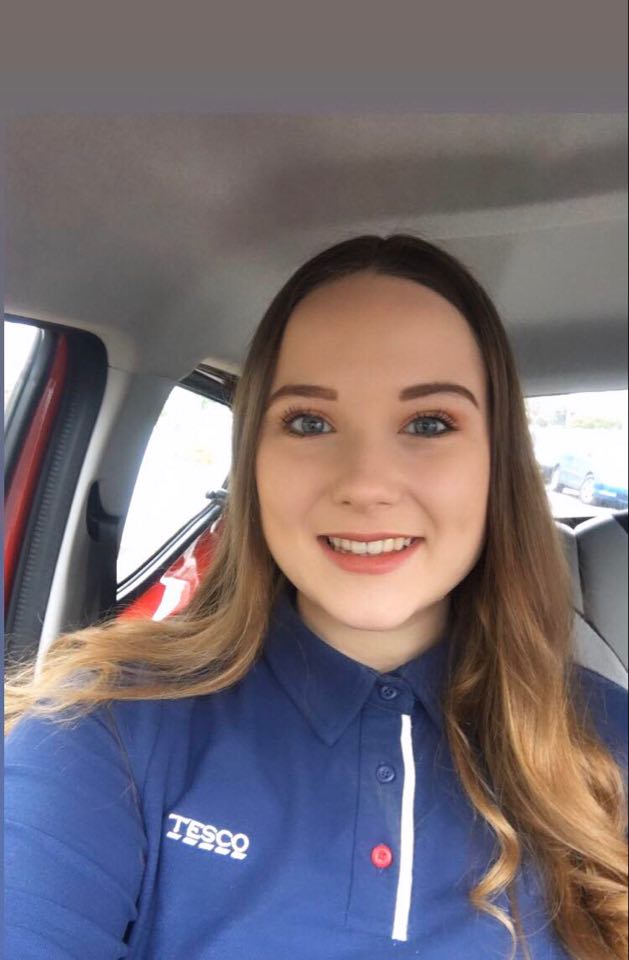 Lorna Boothroyd, a second year medic in her Tesco uniform before a shift.

Tiredness and feeling drained are the realities of working on the front-line day in and day out. Second-year medic Lorna Boothroyd who has taken on a job at Tesco’s talked to me about the minimal hours she can spend with family and the constant feeling of being “tired when I get back from work”. She also stressed the importance of young people using the time to volunteer, she said: “I think it is an important time for young and healthy people to do what they can for food banks and our NHS”. Matthew Steele, a warehouse worker similarly commented: “I am starting to feel drained as I am also taking on other people’s shifts”.

Another major difficulty that came to light when talking to the family members of key workers was the burden that comes with waving their loved one off to the front line every day. Carolyn Buamah expressed the stress that comes with this, sharing the anxiety that comes with “watching my mum leave, I think she’s really doing this, she’s putting herself at risk on the front line”. Politics and sociology student Lottie Carding who’s mum works as an emergency nurse practitioner addressed the worry within the household of the spread of virus “my mum wanted to choose where would be best for me, it was difficult having to decide whether it was safe for me to come home because of their work”. Lottie’s mother expressed the “anxiety” that comes with “being very worried about bringing the virus into the house”.

Rosie Coarn conveyed her concerns about her father who suffers from chest problems and before pneumonia going into his workplace every day he says despite the risks he still “wants to continue his role as a site manager, to make the school a safe space for the children who still need it”.

What everyone I talked to agreed about was the importance of listening to government advice. Jesse Oliver shares “before there were only four patients testing positive within the trust, now most theatres and units are all being prepared and transformed into COVID-19 hospitalized areas. From that, I could sense the severity of this spread of disease. Isolating is vital”. Therefore the least we can offer our amazing NHS and vital workers who are serving our society through these turbulent times is to stay inside for the protection of others, Carolyn Buamah whose mother has been working tirelessly onwards suggested that in this respect “it would be an insult for me to go out and act ‘normally’. An insult to what my mum is doing and everything the NHS is doing”.

We need an infinite number of “thank yous” to praise those on the front line battling the spread of this virus. When asking for words of advice for other key workers, it was emphasized to me how important the support system is in the workplace. Keith Lane father of student Bronwyn who has recently returned home from university gave sage advice and stressed the importance of “taking evenings off if you can. Try to have normal fun times. Keep physically fit and wash your hands”. Where a sense of unity is especially prevalent in this time, it is always important to ask for advice, Matthew Steele also advised it is key to “not do anything you are not comfortable with in this time”.

After this, society should rewrite the definition of a superhero. Scrap the cape and golden belt, the heroes of our generation are the ones who fought evil in the form of a virus and protected the public in ways far more than those outlined in their job descriptions.

Suspend your studies if you don’t have a laptop, Uni of York told its students

Unis won’t even be back to normal by September, warns expert

Best dressed in lockdown: The sickest looks from students in quarantine