The University of Manchester Ski and Snowboard Society has promised to tackle "damaging attitudes and behaviours" following an investigation published by The Mancunion.

In a statement posted to their Facebook page, the society says the content of the article "is not representative of SKUM's values," and members of the society have faced online abuse as a result.

"The committee will take immediate action by releasing a code of conduct to which all members must adhere," it reads. "We will no longer endorse the game of G.NA.R, and we will discontinue the 'SKUMday Times'.

"We have reflected on what has been reported, and thought about the society's long held traditions which we supported with the best intentions. We now recognise this as contributing to the sort of behaviour this society wants to commit to the past.

The Mancunion article, which compared the society's behaviour over the last five years to Oxford's infamous Bullingdon Club, revealed members allegedly caused up to £12,000 in damages during one trip, discussed "preying" on freshers in their group chat, and encouraged members to engage in public sex acts in the name of challenges.

Members of the society documented such events in a publication called The SKUMday Times, which the society claims it will discontinue.

In one case, screenshots obtained by The Mancunion show one member discussing sexually assaulting a female skier for "infinite GNAR points."

A University spokesperson told The Mancunion: "We are aware of the troubling allegations of totally unacceptable behaviour in relation to one of our Athletic Union organisations.

"An investigation will now be launched by the University. If any breach of the Athletic Union’s or University’s own Codes of Conduct is found, swift and appropriate measures will be taken.

"As a University, we’d also like to make it clear that, we are proud of our inclusivity and diversity and expect all our student clubs and societies to reflect this in their conduct and behaviour."

In light of The Mancunion article, the University launched an investigation into SKUM.

In its statement, the society promises to encourage its members to attend wellbeing and sexual consent workshops, provide "beginner's lessons and girls-only freestyle nights," and bring a wellbeing officer onto the committee.

The statement also confirmed this Easter's ski trip will be going ahead, but that members could request a refund if they had "any issues" with the Mancunion piece.

SKUM also highlighted the online trolling members of the society have faced as a result of the Mancunion article.

"Online trolling is a serious issue and can damage the mental health of individuals," the statement reads. "We would like to ask everyone to think before they type hiding behind a screen, and to be kinder to one another."

Read the full statement below: 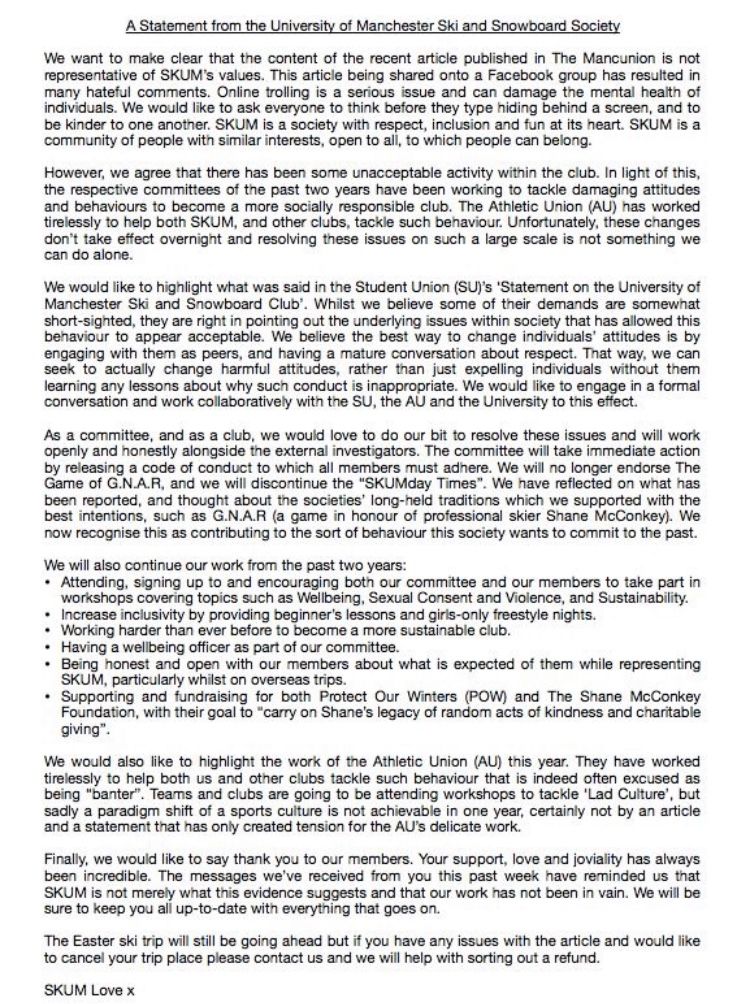 If you are or were a member of SKUM, we want to hear your stories. Message our Instagram or Facebook page with any information.