Within ten seconds of coming in the door I had already been given a tip: “Being too competitive is not good for Mario Kart.” This was proven to be absolutely awful advice. Within the minute the person who told me this bombed out of his race in 12th place.

Mario Kart gets at something primal within us, a desperate lust to win that can’t be extinguished. Who wouldn’t leap at the opportunity to beat the entire of south Manchester and laugh in their faces about it afterwards?

Enter Solomons, Withington. These utter geniuses decided that the time had come for folks to throw down, and 64 players and their fan clubs filled the front of the bar, eyes fixed on the television that would host the tournament. 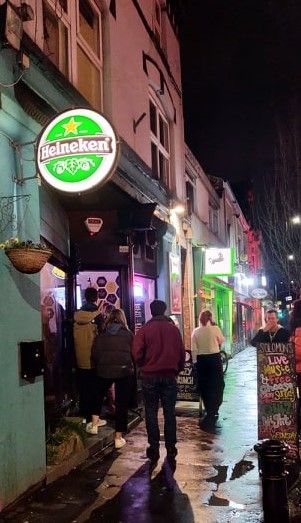 There were to be 16 heats, each with four racers- the winners of each of the heats would be entered into a tournament, with a karter having to win three 1v1 races to get into the final. The winner would take a home prize pot of more than £100. Stakes were high. The first set of racers are called up and sit on four bar stalls set out in front of the TV. They’re each given a Wii-mote in a wheel, and are told what section of the screen they’re racing on.

Quiet settles as the game loads. Looks of concentration dart across the racers faces as the light counts down to green. The silence was broken as the racers set off to howls from the crowd. Commentary came from crazy Dave, his booming voice sounding over the yells of the rabble.

I overhear someone talking about the ideal cart choice. “The Bowser bike and the Mach bike are the best… some people have looked it up.” This carting expert is Joe, and he pointed out that one of the racers had Mario riding a rubber duck. This was called the “Quacker”, and quickly became a crowd favourite as it took the lead. The Bowser bike lost, the Quacker came middle, and the Mach bike with Luigi won.

Then Joe’s name is called up, and he pushes his way through the crowd to take his seat and Wii-mote. He picks peach on the mach bike, leading to concern from his friends who insist “Daisy is the better choice”, and “Peach is a poor man’s alternative”. Joe promptly comes last, trailing for the entire race and vindicating his friends’ worry about inferior princess choices. “Just did bad man” he tells me, while his friend Ruth reminds him that he “didn’t get the item crates”.

Thinking I might have chosen the wrong person to ask about the Mario Kart meta I listened to the crowd and overheard someone arguing for the superiority of Luigi. This turned out to be a lad called Robin. I asked him if he was racing, and how he thought his chances were.

“Yeah, I don’t know if I’ll win” he told us modestly. Stevie, his flatmate gives us a more honest assessment of Robins skill: “We make him do it behind his back and give us a two-minute head start… he still wins”.

“It was one of the closest of my life,” Robin remembers of his first race. “I got knocked off four times and they just caught up at the very end. A Bullet Bill knocked me off, and two red shells at the right time knocked me over a jump. The fourth one was just me screwing up really, but in the end, I pulled through and got first.

“There’s some steep competition on the other side. I’ve seen some amazing carting tonight. Four people at least are good. One individual, he knows all the tricks, he clearly knows what he’s doing.”

This man was Jaime.

The final came, and the racers took their seats. On one side, our hero, Robin had beaten all in his path, taking his trusty Yoshi on the Mach bike. On the other Jaime – he’d beaten his previous opponent first to last, and I could see a look of concern in Robins eyes.

Robin chose Mario, also on a bike. The choice of track for the final was obvious – the infamous Rainbow Road: a twisting path of psychedelic candy running through space that looks straight out of a Lewis Hamilton fever dream.

Straight out of the gate, Jaime took the lead, but Robin was right on his tail, so close that he showed up on Jaime’s screen, his Yoshi a green shadow chasing after Mario. They sped along, nose to tail across the void of space, Jaime barely keeping his foe behind him until one fateful throw of the thumb stick sent him falling down into the abyss.

After that, it looked as if it was all over for Jaime – he’d dropped down to first, eighth, and then twelfth as he fell. For most Marios, this would be too much, but Jaime made it first to third, and then to second, and within seconds he was right behind his foe.

The crowd screamed their racer’s names as they approached the end of the first lap, Jaime only a few seconds behind, waiting for Robin to mess up, trying anything he could to knock him out of the lead.

But it was all for nothing. Robin had done a perfect run, not falling off the track, or missing a jump once. He smashed over the last jump, into the vortex that would lead him to victory.

More than a hundred people leapt to their feet, screaming Robins name. His rapidly growing fan club rushed to embrace him. The boy was the best Mario Karter in all south Manchester, and that was all anyone cared about.

After the mayhem had died down, I chatted the organisers, Rick and Crazy Dave. Asked if they’d expected it to be this lively Rick told me :“We did it last year and we had 32 people. It was really good, so we’d thought we’d probably try and do something similar but increase the numbers. It does take quite a while now, but the interest is there because of all the money that you can win. It’s winner takes all.”

Dave adds: “Once it gets going you get a lot of players, it’s nice to do it, and I loved it. I’m a singer, I do a bit of introducing and that, and Rick picked up on it and got us down to commentate. I don’t know much about Mario Kart so I just treat it like robot wars, that works.”

Rick wasn’t impressed by the standard of kart racing, describing the standard as “about what I’d imagined to be honest”.

“When we hit the last two rounds everyone started to be like Robin!” he added. Rick nodded in agreement. “Yeah when I saw that Robin in the second round, I thought he might have a good chance, like he was leading from the start.”

“Last year we had this young lad who came on his own, and he won it. Just shows, by the end of the night everyone was on his side.”