‘We scare them with truth’: We spoke to XR protestors at the Freshers’ Fair

Three of them glued themselves to a barricade

Around 2pm, three XR protestors glued themselves to the entrance, in-between Academy One and the Students' Union, blocking access to the fair for a period of 10 minutes. While Showsec security officers managed to create an entrance, the protesters held position right next to it for the duration of the fair.

This comes as part of a larger series of protests being held, including the students strike for climate on Friday.

The police were present, but not in force

Reactions were mixed. First year Tom told The Manchester Tab: "I didn't even know they were there."

Karolina, a second year, had "no idea why they are here". Both, upon being told it was XR's goal to reduce UK net carbon emissions to zero by 2025, sarcastically wished them luck.

Other students were more supportive. Keira, a PhD student said: "The cause is great, but why are they going about it this way? The majority of the student population supports them already."

First year Adam said: "They're not annoying, and I still think it's good, but this is not the best way to get the message across." 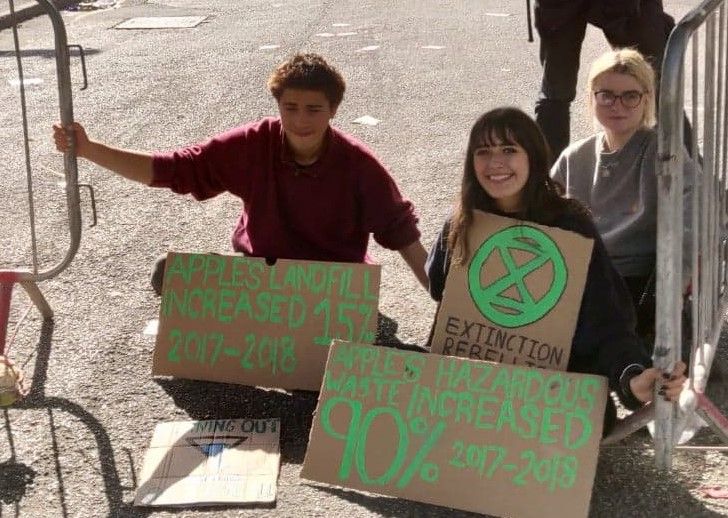 Three of the protestors – Aramanta, Oscar, and Erin – super-glued themselves to the barricade told The Manchester Tab they thought the protest had been a success.

"Here outreach is the biggest thing. We've caused a lot of disruption. Obviously we were trying to close down the Freshers' Fair, and that was only partially successful, but we didn't think we'd succeed," they said.

"Our initial hope was to cause them to shut it down due to fire safety regulations- lots of other Freshers' fairs have been disrupted this way.

"We scare them with the truth."

When asked what their specific demands for this protest were, they replied: "While we consider the SU an ally, and they do a bunch of things to help us, this protest is specifically to get them to stop them having large corporations like Apple, and Amazon at the Freshers' fair, and to get them to reduce the environmental impact of the event in general."

Some people reacted very negatively to the disruptive protest. Oscar said: "Security attempted to remove us by force at first, until the SU welfare officers told them to stop".

By the time The Manchester Tab arrived, relations between the police, security, and XR had warmed up.