SU shoots down proposal for a Mancunion ‘sensitivity reader’

The amendment was met with accusations of the SU being ‘unconstitutional’

Last night, The Mancunion proposed to ring-fence the funding for the printed version of the paper until 2022 at Manchester Students' Union March Senate meeting.

This proposal was met with an amendment by the Liberation and Access Committee stating that The Mancunion should not get protected funding unless a 'sensitivity reader' is appointed.

The Liberation and Access Committee's amendment, presented by Sara Khan, was rejected with a 74 per cent majority last night, meaning The Mancunion will continue to be funded until 2022 and remain editorially independent.

The amendment alleged that The Mancunion have engaged in "unethical journalism" in the past, the impact of which may "result in psychological distress, and puts people at risk of being harassed, especially women, who are particularly targeted with death and rape threats through social media."

In a post on FSG regarding the proposal of a sensitivity reader, one UoM student said: "This is a disgusting infringement on our free speech as a newspaper, so I hope anyone who cares about freedom can complain about this so we can write independently without having some totalitarian Nazis telling us what’s permissible." 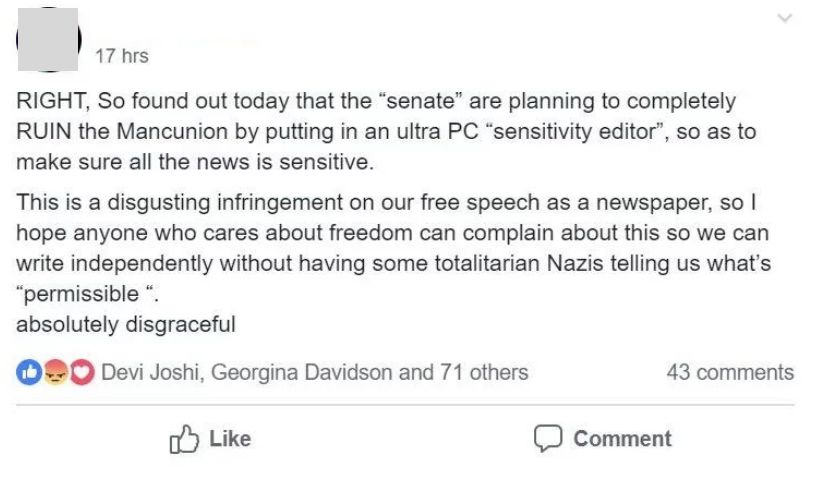 In response, Matthew Caine, PPE student at The University of Manchester, clarified that the role of the sensitivity reader was partially defined as an adviser for The Mancunion as "opposed to a second chief editor".

Matthew said: "The proposal for a sensitivity reader was not put forward to block controversial stories about future SU officers cheating to win. It was put forward by the Liberation and Access working group, who felt that certain articles had been put forward in an insensitive manner in the past.

"One example might be the (argued) misrepresentation of the ‘clapping ban,’ which played a (at least, minute) role in members of that working group receiving very violent abuse."

Manchester SU has bye-laws protecting The Mancunion's editorial independence. The proposed amendment of the introduction of a sensitivity reader to The Mancunion was met with concern over whether this would be "unconstitutional".

However, according to Manchester Students' Union website, the Senate has the power to amend any SU bye-laws provided the proposals are met with a majority of 66 per cent or more and approval by the Trustees.

Regarding the proposed amendment to The Mancunion and how it reflects on the SU as a constitution, a Mancunion Editorial team member told The Manchester Tab: "Essentially, the amendments are against the SU constitution and are impossible to achieve – quota especially."

The Mancunion re-funding policy proposal was approved with 84 per cent voting in favour, and the paper will continue to be funded until 2022.

Sara Khan said: "Many publishers employ sensitivity readers and it poses no threat to the integrity of the writers’ work. The measure proposed would purely work to protect vulnerable people and ensure that they are represented with care and understanding.

"Biased journalism has a very real impact on people’s wellbeing and lives and it’s a shame that The Mancunion don’t believe they should be held accountable for what they publish.

"While I see the concern about a 45 per cent quota, I don’t believe this is impossible to achieve at all. I think The Mancunion should be asking, when we have a BAME student population of 45%, how is it that only 16% of applicants to the paper last year were BAME? Are there factors putting BAME people off applying at all? Is the paper doing enough to recruit BAME people?

"Instead if dismissing initiatives to improve the paper’s accountability, transparency and diversity, if they disagree with these particular proposals, why not discuss others? Why is this “threatening”?"