Jeremy Corbyn was in Manchester this week, here’s what he had to say

Education and Mental Health services are central to his campaign.

Jeremy Corbyn campaigned in Manchester yesterday to highlight the importance of equal education and opportunities for young people. Tuition fees, something that matters to the 2 million university students studying in the United Kingdom may be scrapped if Labour wins the General election on June 8th. Yesterday Jeremy Corbyn said “I don’t want a ladder for the few, I want a staircase for everyone to go up together” during a passionate speech about education and mental health services.

Although it has not been released yet in the official manifesto, leading members of the Shadow Cabinet and Jeremy Corbyn have all but said that they would like to see the end of tuition fees in the UK.

Shadow Chancellor John McDonnell revealed the policy during a speech in Mansfield said “It means scrapping tuition fees once and for all so that we don’t burden our kids with debt for the future”. Whilst Angela Rayner, Shadow Education Secretary, when asked about the possibility of scrapping tuition fees hinted “watch this space”.

Yesterday in Ashton-under-Lyne Jeremy Corbyn said “There is still a postcode lottery on who gets to university”, and that “the Labour government we elect on June the 8th will address that imbalance in our society”. 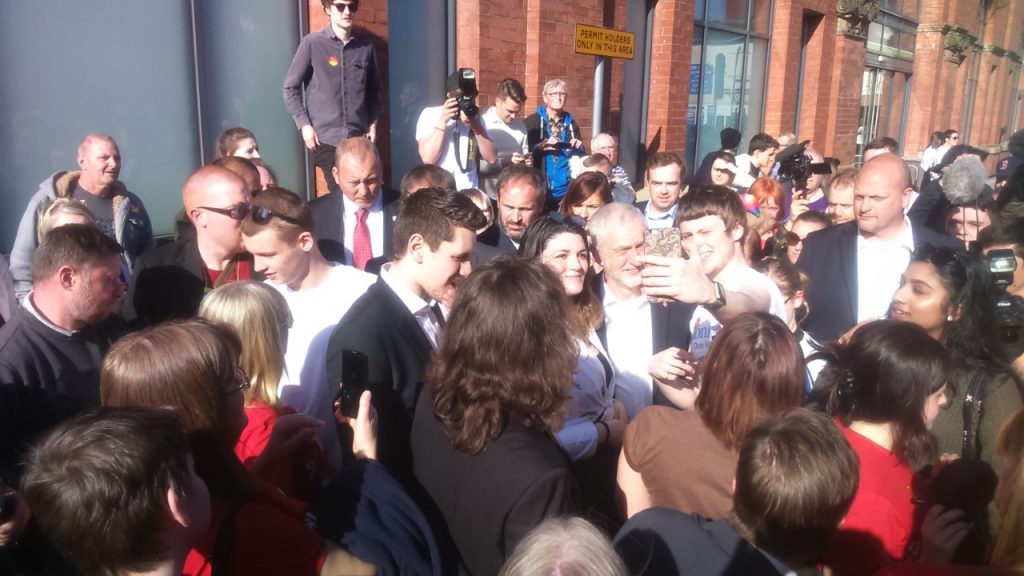 “For the many, not the few”

Labour were criticised during the 2015 Election for a timid manifesto reducing tuition fees from £9,000 to £6,000 per year. A complete overhaul of tuition fees is sure to increase Corbyn’s 55 per cent popularity amongst students.

During the 2015 campaign, Jeremy Corbyn had said he would get rid of tuition fees by increasing the national insurance for high earners or corporation tax. Yesterday he said “The tax evasion and avoidance industry is ‘Happy Days are here again with a Tory government’ … we will make sure that money is spent on what we all need”.

If tuition fees were scrapped English schools, maintenance grants and education maintenance allowance would need £5.7bn. The Labour party insists an annual £20bn would be raised by increasing corporation tax from 19 per cent to 26 per cent by 2021-22.

Critics of high tuition fees suggest that they will continue to rise in cost as more students fail to pay back their loans, write-off costs have equated to 45 per cent of  more than £10bn worth of student loans.

Mr McDonnell said that the plan to scrap tuition fees would make Britain “radically fairer, radically more equal” before adding “What do you call that? I call it socialism?”

Whilst Jeremy Corbyn said endorsed a redistribution of wealth because “all of our children deserve the best possible education”, adding: “it’s the labour way … we’re the ones who have expanded educational opportunities and university possibilities for so many people.”

Jeremy slated the Sunday Times Rich List 2017, which revealed that the 100 richest people had a 14% increase in their wealth in the past years, calling it out as “simply wrong”.

Corbyn also addressed the NHS care services failing for the elderly, those special needs and those disabilities are not available with “a million people waiting for some kind of help and care” across the United Kingdom, which leads to problems in the A&E Departments, and GP waiting lists. “That is what you get with a Tory government underfunding our health service, underfunding our social care.” declared Corbyn.

“I feel very passionately about is the mental health crisis facing this country” said Jeremy. 1/4 of people in the UK are likely to face a mental health problem at some point in their lives, particularly young people who can feel alone and isolated,  Jeremy Corbyn promised to “fund mental health services properly in schools and colleges and universities”.

Finally Jeremy discussed a National Investment Bank and a living wage of £10 and hour, that he said “makes economic sense”.  With the aim to reinvest the money industries across the UK, into the housing and building industry to encourage economic growth. “That is the labour way, we invest to succeed in the future.”

Register to vote here at www.gov.uk/register-to-vote.