It’s time to take notice of domestic violence in Manchester

Last week, Mustafa Bashir, 34, from Cheetham Hill avoided jail after a judge concluded that his female victim was not a vulnerable person, as she was “plainly intelligent”, having graduated from university with a 2:1, and had a supportive network of friends.

Despite being found guilty of forcing his wife to drink bleach and striking her with a cricket bat, Bashir escaped a custodial sentence, instead receiving an eighteen month suspended sentence and ordered to attend a workshop on “building better relationships”.

His lawyers argued that, as a local league cricketer, if Bashir was spared prison, he could take up a professional contract with Leicestershire County Cricket Club. This is a claim that the LCCC have now denied, stating that the club has never had spoken with or had any contact with Bashir.

Bashir abused his partner, Fakhara Karim throughout their marriage. He threatened her numerous times, including with the cricket bat that was used to strike her, saying “If I hit you with this bat with my full power, you would be dead”. He also forced her to take tablets as well as bleach, telling her to kill herself.

However, he walked away from a prison sentence at Manchester Crown Court after Judge Richard Mansell QC concluded:

“This relationship started well but you began controlling her and how she spent her money.

“You told her how to spend her money and you tried to turn her against her family who you regularly insulted. She would buy clothes that were of a western style which you disapproved of and called her a slag and said her friends were ‘English slag girls.’

‘’But I am not convinced she was a vulnerable person. Sometimes women who moved here from their country become trapped in a relationship where they lose their support network of family and friends and cannot speak the language.

“This is not the case here. She is plainly an intelligent woman with a network of friends and did go on to graduate university with a 2:1 and a masters – although this has had an ongoing effect on her. She has difficulty trusting people now, especially men.’’

Judge Richard Mansell QC has since come under criticism from domestic abuse campaigners for his remarks, accusing him of “shocking ignorance” and arguing that the result sends out a “dangerous” message to victims who are afraid of coming forward. An online petition has since been started, asking for domestic violence to be taken seriously in courts. Jenni Smyth, Women’s Officer has urged people to sign the petition, stating:

“Again we see that those making decisions have absolutely no clue when it comes to the dynamics of domestic violence and yet again women are blamed for the violence inflicted upon them.” 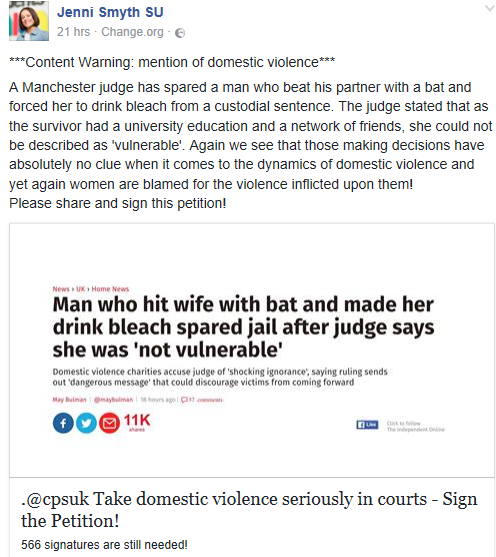 Miss Karim, Bashir’s victim and ex-wife, who said she feared for her life during the abuse, spoke out after the judge’s shock ruling:

“Before I met Mustafa Bashir I was a confident, active and humorous person. I looked after myself and liked dressing up.

“After the abuse my confidence was very low and I hid myself away from family and friends.

“Once we split it took months for me to get my self-belief back and I am not back to the person I was before.

“I can’t see how I could trust another man again after what happened to me. I dreamt of being in a happy relationship and I do not feel now that that will ever happen with someone else.” 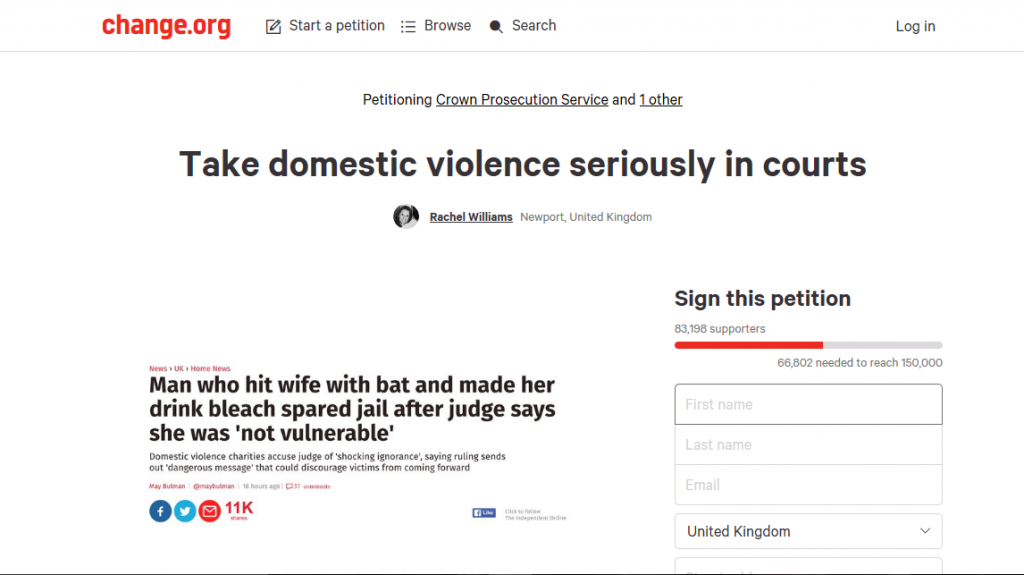 Maria Miller, Conservative MP for Basingstoke and chair of the Women and Equalities Select Committee said that this “devastating episode in the victim’s life” needed to “be properly understood by judges”.

Jess Phillips, Labour MP for Birmingham Yardley, said “Your vulnerability and your risk is a completely dynamic thing.

“Everybody has a dynamic risk, I’ve met women who went on to be murdered who had law degrees, who were very eminent business people.