It fell due to heavy rain fall

Several panels above platforms one and two fell due to the heavy rain.

Witnesses said that “gallons of water” fell on those who were standing on the platforms as the roof panels came loose.

The rest was sealed off before any further damage took place. Northern railway are also currently fixing the roof and all services are running normally.

BBC North West Tonight reporter Peter Marshall said: “Other panels are bowing under the weight of the water.” 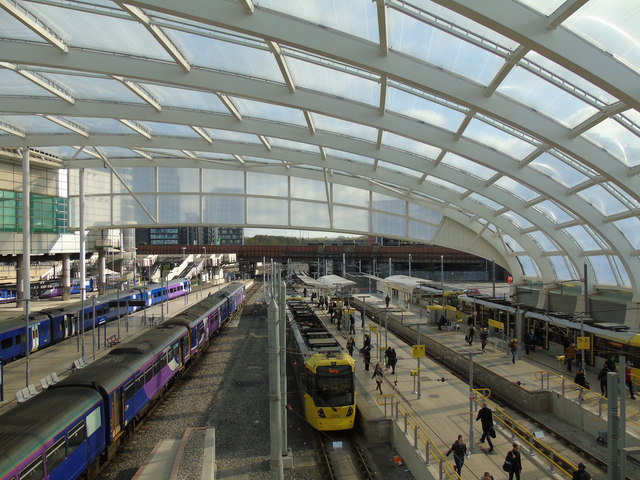 Jenna Barton, from Bolton, told the BBC: “I was just at the ticket gate and then I heard a massive crack and I then just saw, like, gallons of water fall down on top of the train.

“I don’t know whether people were boarding or leaving the train, but it hit quite a few people and then I saw a lady on the floor, obviously drenched from the water. She’d been hurt.”

Rachel Fish from Saddleworth was waiting on the platform when the roof collapse. She said: “People were shocked. They were stood around wondering what else was going to come down from the roof.”

“The station remains open, as do all platforms with no disruption to services.”

The two injured passengers were taken in an ambulance to Manchester Royal Infirmary after the incident.