I whored myself out to the greasy cheesy man

Like most students a series of incompetent financial decisions left me in need of money, and quickly. The bank of mum and dad had closed its doors for business (thoroughly understandably), and I was left what might be described as a cash flow problem, or more accurately, a growing up problem.

This is how I found myself stood on a junction in Didsbury dressed as a pizza box at 7am, letting commuters know they could buy pizza for a slightly less extortionate price than normal. 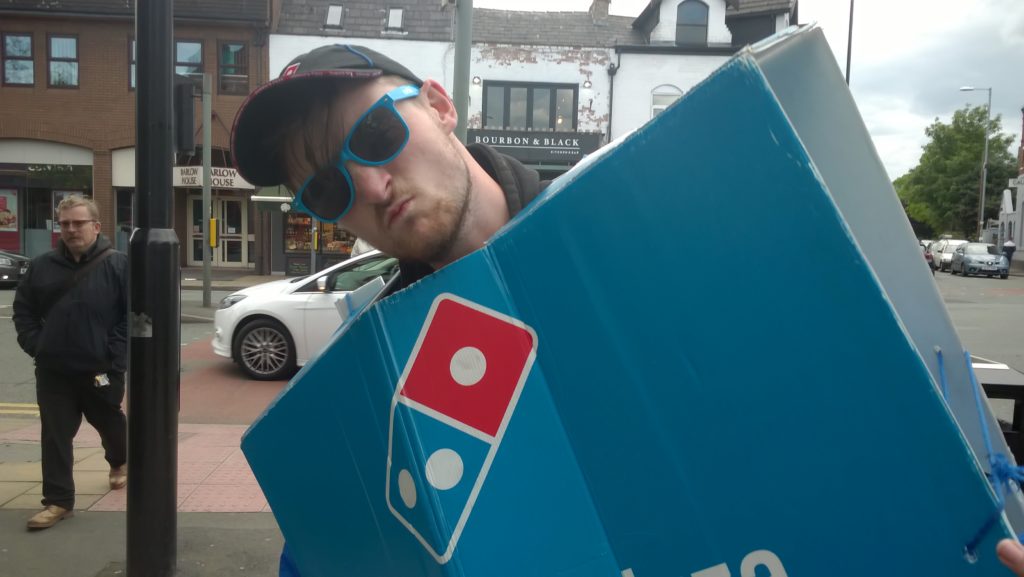 What you know about pizza fam?

I felt like I had hit the the lowest of the low. Drug dealing requires an element of business prowess, stripping is reliant on the god given ability to arouse a man (dancing skills preferable), but this was essentially selling my body to the greasy cheesy man. Like any good sex worker, I had to feign a modicum of enjoyment – if I pretend to enjoy myself, I might actually end up doing so. We’ve all been there. 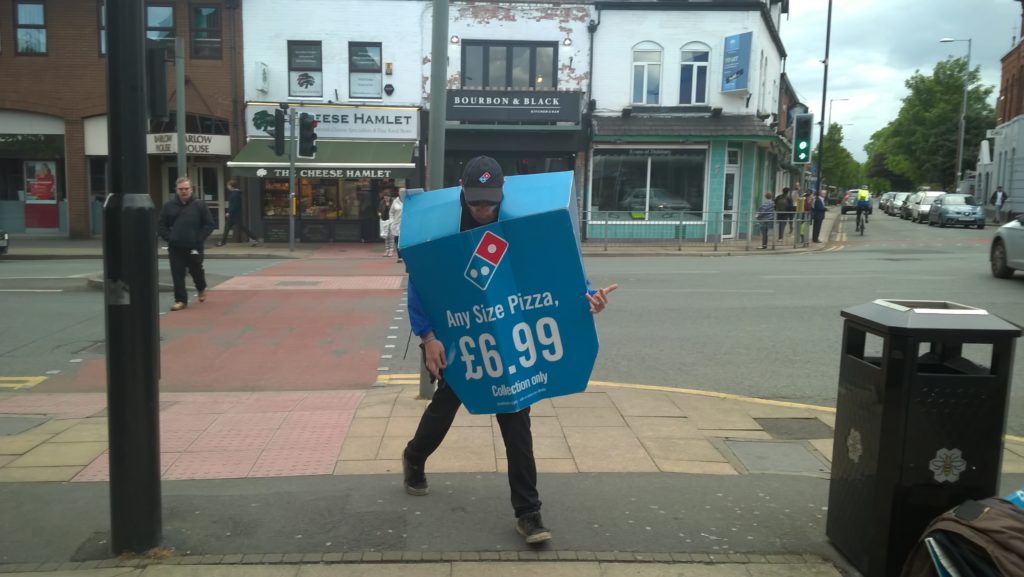 With this “points for enthusiasm” mindset, I realized my pizza sign made a splendid air guitar, and that doing my best Dave Grohl impression might actually lead people to believe that I could play drums. I stuck on Heart of a Coward, and head banged like a maniac for six hours.

Now, peoples’ reactions to a (vaguely) grown man losing his shit in the middle of the street whilst dressed in a cardboard box varied greatly. The kids loved it, students gave wry smiles, and old people don’t give a fuck anyway, so they enjoyed it. White van men imitated me whereas other middle aged men were far less impressed. This complete pillock could be their child, and all their hard work would be ruined. Shout out to Dad. 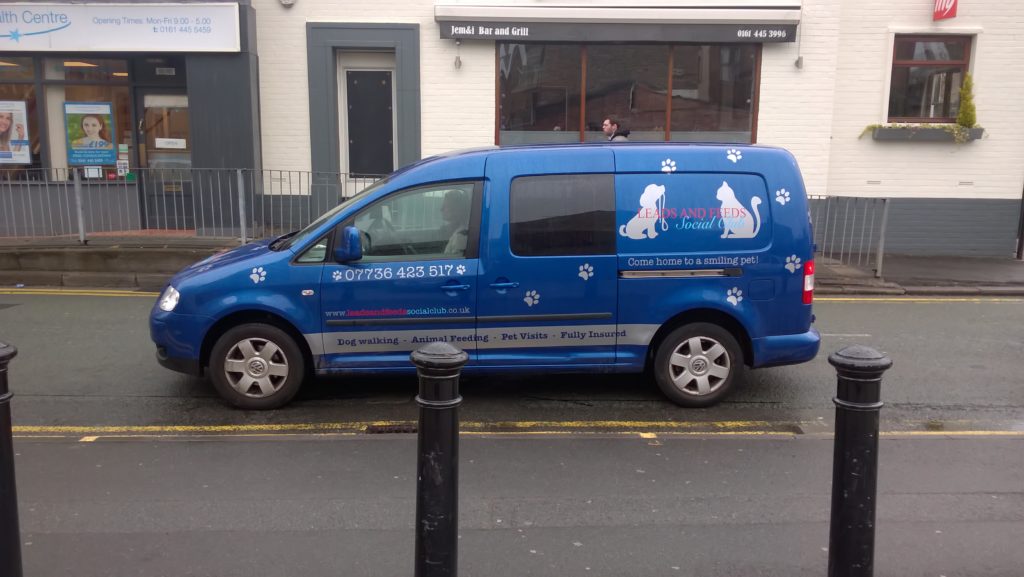 I’ve had a lot of time to get to know Didsbury from a very specific slab of pavement outside Costa, and from that vantage point I can confirm that the rumours are true; it’s a middle class paradise, a little pocket of the home counties nestled in south Manchester. You can tell from the cars. Aside from all the yummy-mummy climate terrorists in their Chelsea tractors, it’s the branded cars that scream Waitrose loyalty.

My personal favourite was “Baby Ballet with Miss Laura”, because after all, what upbringing is complete with out ballet lessons before you can walk? Honourable mention goes to “Barking Mad! – An alternative to kennels”, an essential outgoing cost of any holiday, I’m sure you’ll agree.

Because there are so few quinoa strongholds in this city, it gets condensed and subsequently amplified in one area, elevating the bourgeois feel of the whole place, “The Didsbury Effect” if you will. It’s easy to take the piss out of, it’s pretty much a parody of its self, but I’m not knocking it, it’s a lovely place. It’s worth mentioning that the locals were all incredibly friendly and completely sans snobbery. I hope to move there one day when my career as a sign really starts paying the bills. 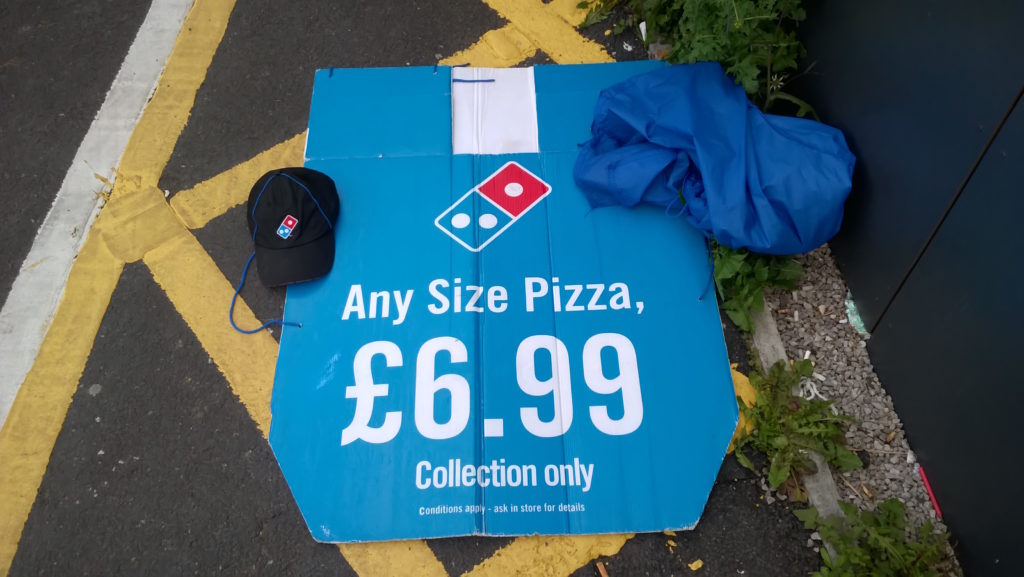 The final thing I want to mention is the type of people this job attracts. So there are people like me, students who spent too much money on #fun and are now living to regret it. Then there are the 17 year olds, the first job crowd looking for some spending money for the inevitable Zante trip in a few months’ time. Lest we forget the scallie contingent; people whose faces have been permanently changed by Class A drug use and breakfast Stongbows, guys who think it’s appropriate to sell green and smoke spliffs in uniform. Absolute wronguns, but the city wouldn’t be the same without them.

I’ve utmost respect for all of the above; it’s not easy to get out of bed at 6am with the prospect of standing in the rain for hours on minimum wage, and the vague promise of a free pizza. The rain eventually stopped, the shifts ended up passing faster, and I found myself wanting to sloppily attempt the next Synyster Gates solo on my cardboard box. My efforts were even rewarded with a tip from a generous business man, and a large mighty meaty. I mean what’s success if it isn’t free pizza and making people smile? Oh yeah, a graduate job. Fuck…