Last Wednesday I rushed up to Afflecks Palace, eager to beat you into paying £3 for a bowl of Cornflakes (gluten free of course) at Manchester’s first cereal café.

I expected it to be hard to find a seat there amongst the Northern Quarter’s slick haired hipsters, fresh from their 15 minute stop-offs at Ziferblat and dribbling milk into their beards. When I arrived though, it was virtually empty.

Taken aback by the lack of people, and slightly discouraged by the prospect of having to spend thirty minutes sitting in a window display with some chairs and tables, I had a look at the menu. 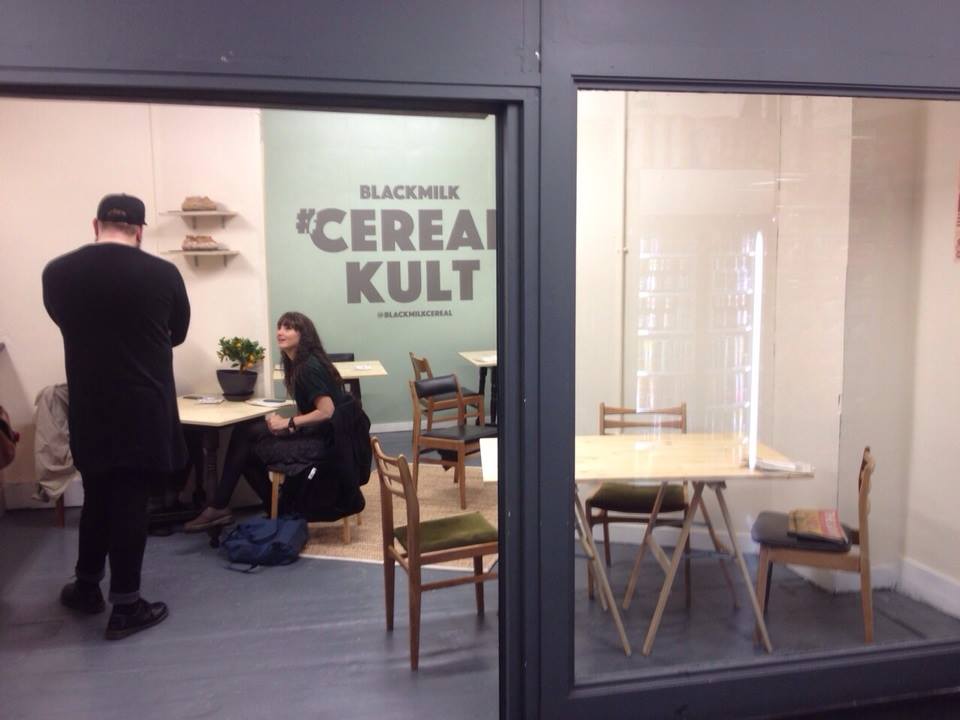 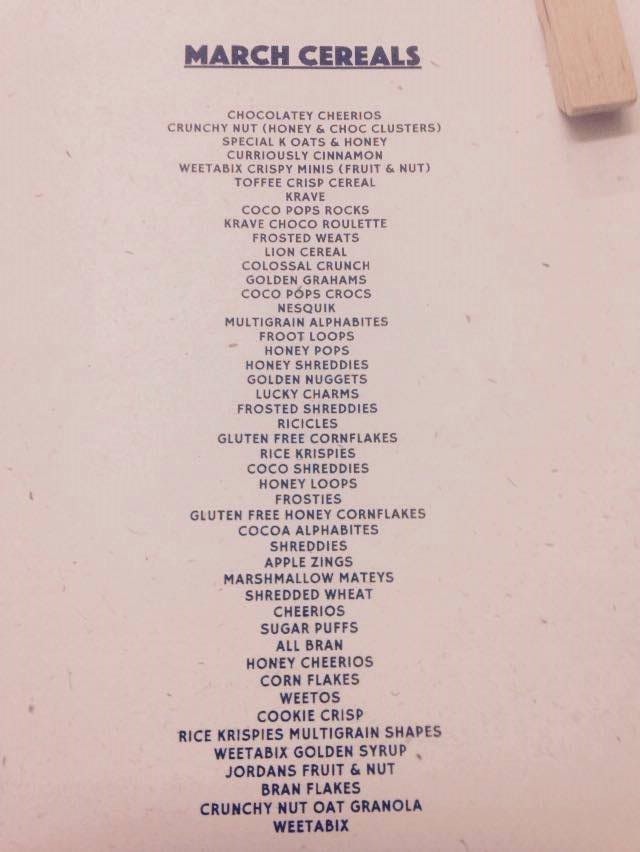 Can’t wait for the April selection

I opted for a medium bowl of Honey Shreddies with semi-skimmed milk and one topping. Yet when I got to the counter, I was told that cereal selection is a lot more complicated than I had imagined. To begin with, I could have two different types of cereals in one dish. I decided to have Krave as well. But which type of Krave? he asked. There were three to choose from. For my topping, I pointed to the broken up Crunchie in a jar. 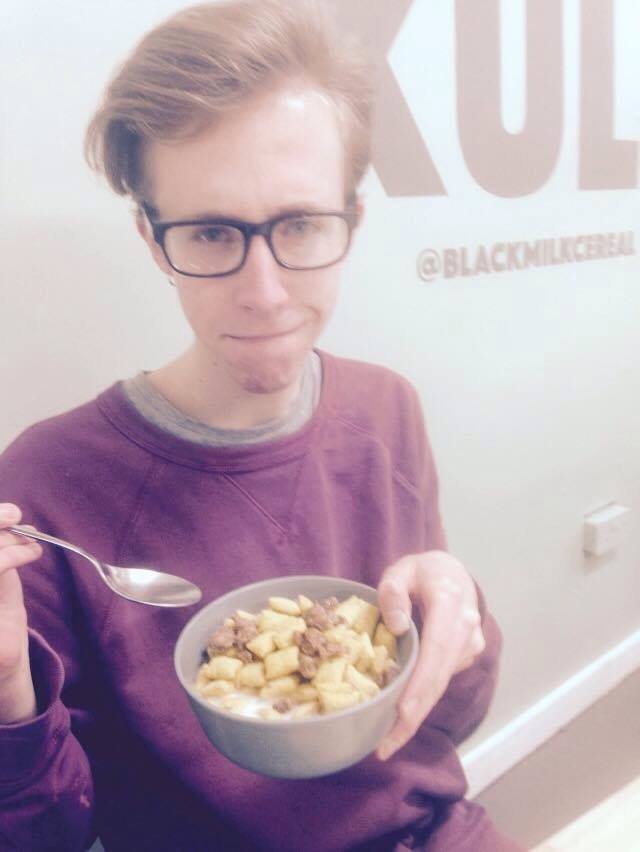 Altogether it cost three pounds. Twenty pence more than I thought it should, but Crunchie I soon found counts as a “gourmet” topping as opposed to a “standard” one. A box of Honey Shreddies costs £2.49 from the supermarket, so I had some reservations about how much value I was getting. But then again, the bowl was served on a wooden board and the milk was free, which the home experience just can’t compete with.

It was nice to eat cereal at midday in an empty room which looked out onto a staircase. This is what it feels like: 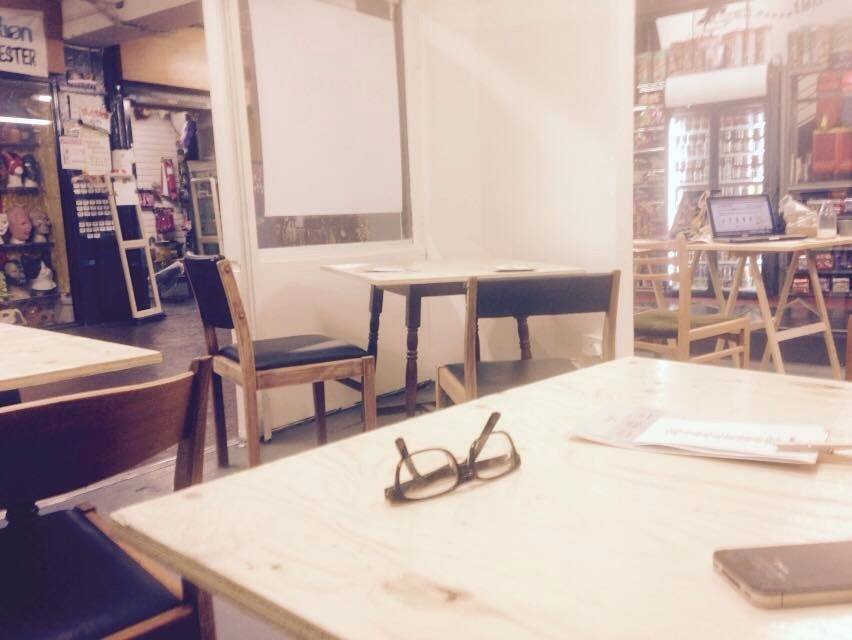 The filter gives it atmosphere

It is also sometimes nice to eat a fried breakfast in a greasy spoon when you’re hungover.

Sadly, with the first crunch of my Shreddies I didn’t find myself magically transported back to my carefree and sought after childhood. Perhaps that’s through my own error: Shreddies are for older people and I should have truly invested in the experience by getting Marshmallow Mateys with Cookie Crisp like my wiser friend… 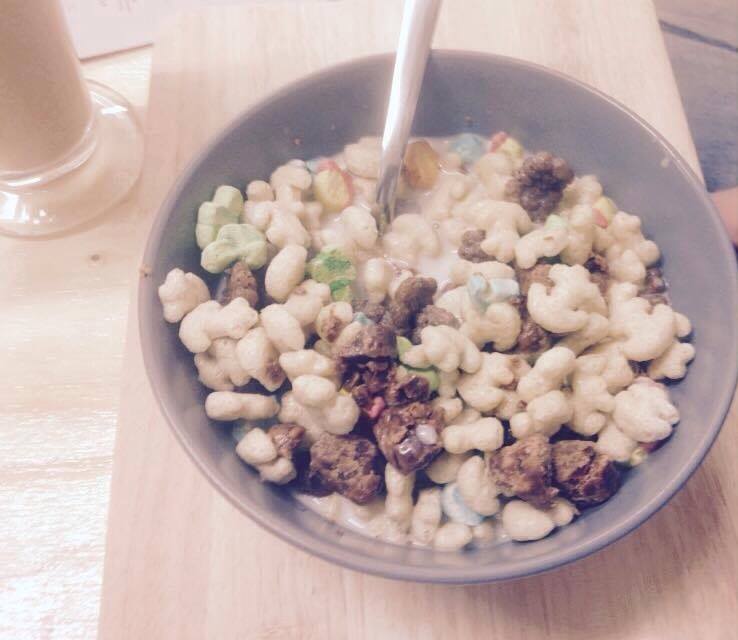 Yet I doubt it. And although for a few minutes slurping up chocolate milk in public made me feel cerealously cool, afterwards I reflected that a sausage roll and coffee from Greggs would have filled me up for longer.

And if Black Milk Dive doesn’t do it for you, who knows, Manchester’s second soon to open cereal café, Cereal Central MCR, might give you the authentic breakfast experience.

Oh and here’s what other people thought: 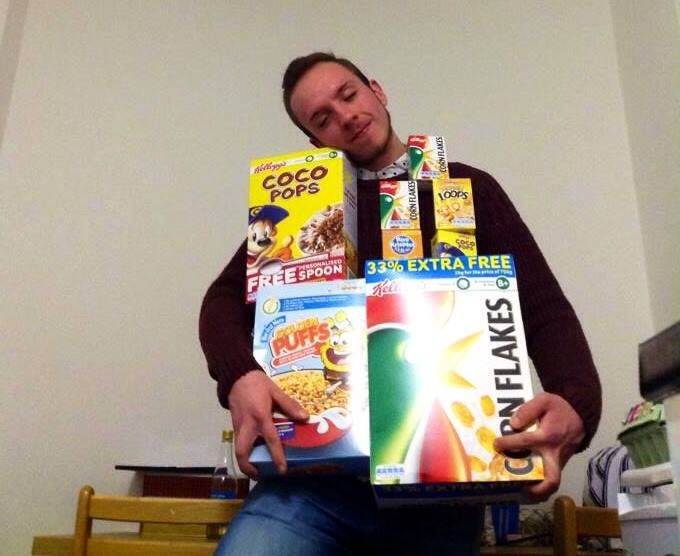 Why did you go to the cereal café?

“My hipster friend dragged me there.”

What did you have?

Why did you choose that?

“Because I love toffee crisp and I like a bit of crunch. Also, you don’t normally see lucky charms around the supermarket.” 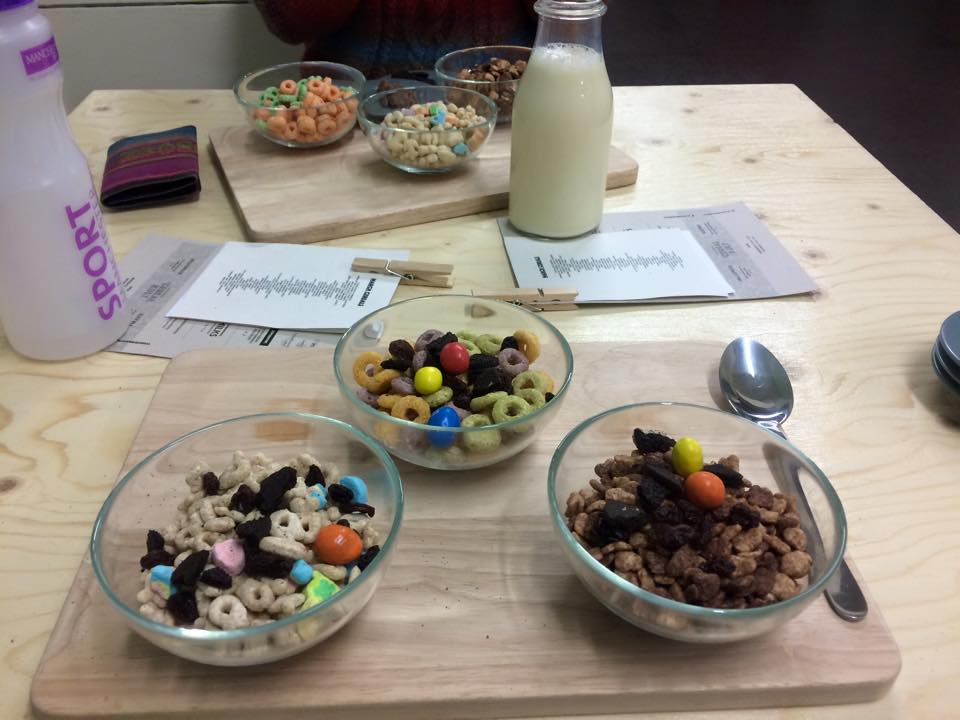 Why did you come here?

“I had to go! The idea of a cereal date was unmissable.”

What did you have?

“I had the slider board. You get three bowls and three different toppings. Lion bar was by far the best, with Oreo and chocolate eggs!”

Will you be coming back?