They watched Take Me Out

A dozy student fell asleep and ended up on a cab driver’s sofa after a night out at Deansgate Locks.

Hapless Mike Allison was invited into the taxi driver’s house for a brew and an episode of Take Me Out after his mates forgot about him.

Now hero cabbie Ujal Singh says “I’d do the same for anyone.”

Fell asleep in the taxi and none woke me up. Now I'm back at the taxi man's house in Stretford watching take me out pic.twitter.com/kwjYqUIB4v

A tweet by 18-year-old Allison went viral lately as he told the world how his hero taxi driver invited him inside.

According to Mike, a student at Sir John Deans College, he and his friends were out celebrating a birthday at Deansgate Locks before they all got into a taxi.

Exhausted by all the partying, however, he snoozed off in the back.

Nobody noticed him as they got out 30 miles away, and he was then driven all the way back to the cabbie’s home in leafy Stretford.

Not even the taxi driver realised he was around until the startled partygoer was awoken by the sound of the central-locking. Surprising, as the driver was apparently playing his music “on full blast and was singing along all the way back from Northwich”.

At 4am, he was invited inside the driver’s home for tea and Take Me Out.

While there, he tweeted: “Fell asleep in the taxi and none woke me up. Now I’m back at the taxi man’s house in Stretford watching take me out.”

Mike told the M.E.N: “He said he could take me home again for about £50 but I didn’t have it. I said I would call my mates and see if anyone could come and get me.

“I asked ‘where the hell are we’ and he said Stretford. I couldn’t believe I’d gone from town to Northwich and was back near town again.

“I began to feel pretty weird because I didn’t know where I was. He said come in my house, and then he made me a brew and we watched ‘Take Me Out’. Eventually my friends arrived to collect me.”

At first Mike was worried his drink had been spiked after he awoke, but with the truth revealed he wanted to thank the man who looked after him when he was simply left behind. 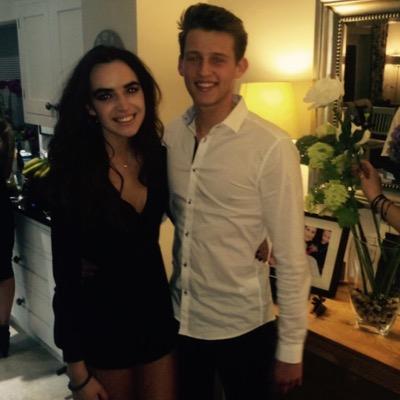 “I don’t know his name or who he works for but I’d like to thank the taxi driver. If I find out I would definitely be using him again to get home.”

The minibus driver has now been identified as 39-year-old Ujal Singh, who didn’t realise he had become internet famous until he was told by a friend.

Ujal said: “I think he was quite scared when he realised he was lost so of course I invited him in for a brew, it was minus one.

“I’d do that for anybody – he was only a young lad. He needed a charger for his iPhone to call his friends and then I waited with him.

“There was nothing else on at 5am in the morning so I put an episode of Take Me Out on I’d recorded while I was at work. It’s a top programme, I’m glued to it.

“I’ve not heard from the young lad since but I’d take him home again – just make sure he gets off the bus this time.” 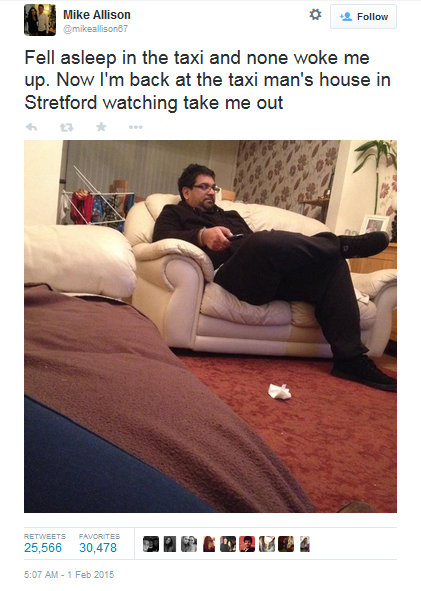