A halls of residence in Loughborough have cancelled their 'Slave night' event after complaints were made by students and the university African-Caribbean society.

Faraday Halls Freshers' organisers had planned two separate slave-themed events. The first on Monday 2nd October was a 'slave auction', followed by a 'Slave night' on the 3rd.

In a message to the complainants, LSU's Executive Officer for Welfare and Diversity, Hannah Keating, claimed the Faraday Hall Chair said she "completely didn't realise the slave night was offensive."

The event was criticised by Loughborough's African-Caribbean Society, who said they were "appalled that such atrocities could be condoned especially during times of oppression against ethnic minority's worldwide."

The society also noted the 'Slave night' and 'slave auction' were due to take place during Black History Month.

This is the official statement from the Loughborough ACS Committee #DearLSU pic.twitter.com/4bR3WCB8is

A committee member of the Ethnic Minorities Network contacted Hannah Keating to complain about the events, calling for its cancellation and an apology.

In the message, Keating originally rejected the idea of a public apology from Faraday Halls, stating she didn't think it would be "particularly proactive in tackling the issue".

Instead, Ms Keating thought it would be better to offer diversity training instead.

As a committee, the EMN did not feel this was an appropriate response from someone who is meant to represent the welfare of all students. pic.twitter.com/MiTs4t593N

According to messages between Keating and EMN committee members, the post was still on Facebook and no apology had been given after three days since the complaints.

The EMN said in the message: "Unfortunately it's starting to seem like black people do not matter to LSU. At the end of the day if it was called 'Holocaust Night', it would be an outrage."

After pressing Ms Keating further, the post was taken off Facebook and an apology was made on the halls page. The post said: "'Slave night' is an unacceptable and racist title. As a committee we are deeply saddened to realise that we have caused offence and regret that entirely." 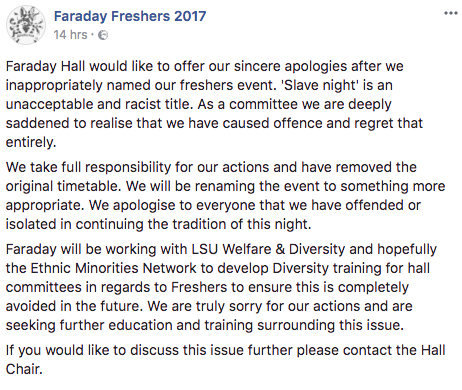 One EMN committee member said on Twitter, "The fact that a whole committee felt it was okay to run a slave night is problematic, the lack of empathy displayed by LSU is outrageous."

Loughborough University have sent out a tweet stating that they were carrying out an immediate investigation.

Richard Taylor, Loughborough University’s Chief Operating Officer, said: “This type of event is not appropriate and has no place at the University. Working with the Students’ Union, the University will sit down with students on their return and explore why this event was proposed and what we need to do better in the future so that this does not happen again.”