Rebecca is a first-year UCL student. She spends most of her time at university alone, in her room on her computer. She imagined going to university, making loads of friends and barely having any time at all between socialising, attending lectures and going to events on campus. Instead, she is isolated, only comforted by virtual friends she has never met in person and has nothing to think about. Except what she eats.

With no “real” friends at university, her only outlets are her social media. Feeling silenced and unsupported by the media, the government and the university she turns to confessions pages like UCLove to express her troubles anonymously. Rebecca is one of many students turning to confessions pages and social media to try and seek mental health support, looking for the support of her peers because in all other spheres help feels inaccessible. 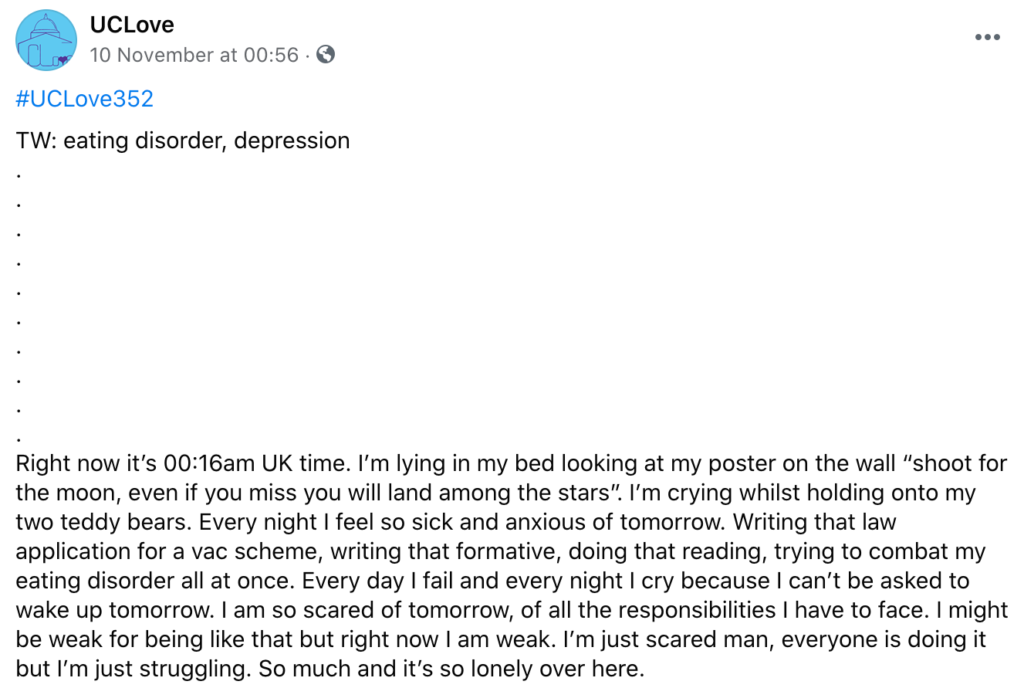 Pav, another UCL student, sees all the UCLove posts about eating disorders and mental health issues and feels comforted in the knowledge that she is not the only person suffering from an eating disorder on campus. She has been put into self-isolation twice because of contact tracing and hasn’t seen another person in the flesh for 22 days.

In that time Pav has taken to limiting herself to 300 calories a day because she has control over nothing except for what she puts in her mouth. She can’t even go out for her daily run because she is in isolation.

Whilst Pav thinks that she is one of a minute fraction of students suffering from disordered eating as a result of the pandemic, she is actually part of a much larger collective.

In our student survey over 60 per cent of students said that they had experienced disordered eating since we had first been placed into lockdown in March.

Pav and Rebecca are not alone, Jo, Talia, Annie and Rita are other UCL students who have all started limiting their calorie intake to under 500 calories a day since the start of lockdown. When we asked them why they weren’t eating they came up with a number of reasons.

Jo said he was “too depressed to eat”. Talia said, “I couldn’t bring myself to leave the house, so I only go the supermarket once every two weeks and I buy as little as possible and mostly live off instant coffee”.

Annie told us: “Every time I thought about eating I felt physically sick and I couldn’t bring myself to cook a meal.” Rita said it was more about the time it takes to cook than anything. “I’m in my final year, I have so many contact hours, the number of essays I have has doubled because of the new ‘online-friendly’ syllabus so when do I have time to eat?”, she noted.

These are just some of the testimonies of students who have been restricting their eating since the beginning of lockdown. According to Priory statistics, the top end estimate on how many people are affected by some form of disordered eating is 19 per cent. 544 UCL students took part in our mental health survey and 327 of them told us that since lockdown they had experienced disordered eating, in our microcosm eating disorders are on the rise by 41 per cent on the national average, that is huge.

Maya is a fourth year, before coming to university she took a gap year to aid her recovery process with a five year battle with bulimia. In August she marked five years without purging, however in November she relapsed because of her current situation.

Maya lives in private halls, her friends do not live nearby and her family live in India. She hasn’t seen anyone who isn’t the halls receptionist since October because she was quarantining before we were placed into a national lockdown. Maya told us:

“A vital part of my recovery strategy is to surround myself with support networks and positive outlets. Now, I have none. Academically I am doing far worse than I have done in my first three years, socially (ha) well I don’t have a social life and pastorally I feel as though there is no one to support me.

“I contacted UCL support and wellbeing when I started to feel my mental state declining in October but I still haven’t had a response to my initial email. Since then everything has deteriorated, my grades have gone through the floor, I am locked in to my tiny studio apartment and all I can think about is what I want to binge later.

“I have nothing else to spend my money on and I don’t want to leave my halls for fear of catching Covid so I just buy takeaways.”

Maya is not the only one facing delayed responses from UCL Support and Wellbeing, 28 of the students who gave their testimonies said that they had waited over six weeks to receive any form of communication. That six weeks was too late for Maya and too late for Ayesha who relapsed into self-harming and was taken to A&E by one of their flatmates because their injuries were so severe.

Ayesha told us: “The self harm came as a result of intense self-loathing. Every time I looked in the mirror the body I saw was one that I hated.

“I put on so much weight during lockdown but all I could do to distract myself from the depression I was feeling was eating. Some days I was eating so much I’d lose track. I was spending all of my loan on food.

“I told myself that I don’t do drugs, I don’t drink, I don’t smoke so what does it matter what I eat, otherwise my lifestyle is fine.

“However, the longer it went on, and the more I looked in the mirror the more and more I began to hate myself and that is when the self harming began and who was there to stop me? Myself, yeah not sure that worked…”

All of these conditions have manifested as a result of mass self-isolation, the impersonal nature of online lectures and the irresolvable distance from friends or family. The role of eating disorders in the mental health crisis that is currently going on is been severely overlooked and deserves far more attention than it is getting at the moment.

Lockdown has caused everyone to reluctantly relinquish control over many aspects of their lives, such vulnerability has inevitably provoked a desire to hold onto the few things we can control. The consumption of food has been a crutch for many trying to grabble with an unfamiliar climate, resulting in a sharp increase in disorderly eating. Many people, who are struggling to control pre-existing eating disorders, have felt a sharp exposure to their triggers, and tools which helped them previously stabilise themselves have been stripped away.

For many consistent exercise, an established routine and social distractions that have remained a strong source of support have become near impossible to incorporate in their daily lives.

Eating disorders are thriving in secrecy

Lockdown has created the perfect storm for students to indulge in cycles of restriction or binging without the support of friends and family as they are isolated from normal life. For the hundreds of students that have been forced to self-isolate in halls, the university has supplied them with their meals which can be a cause of huge stress for some. Owing to the fact that many do feel they have been unwillingly thrown into intimidating territory, where they are not independent in their meal planning and made to face their “fear foods’’ alone. This can result in a regression as they stick to old habits and safe foods that keep them securely within their comfort zone.

This is not just an issue that remains prevalent among those with a history of eating disorders but has brought about new world of control issues for others.

In a normal life, many students are preoccupied with lectures, societies, friends and food has been perceived to be a focus for social events or simply as fuel to get one through the day. With new restrictions,  students are finding themselves in an environment where food and alcohol feel like the only respite, and it is easy to become obsessive with how we utilise this commodity.

Boredom eating is so common, and this has been exacerbated with the mass of self-isolation amongst students. Subsequently provoking feelings of guilt and negative body image amongst people who had never considered themselves a subject of such mental health problems.

Lucy’s biggest fear in all of this is her academics, “I feel like my life is spiralling out of control. I am obsessed with fasting and its exhausting. Sometimes I physically don’t have the energy to get out of bed. I can’t concentrate in lectures at the best of times with things being online but my health is turning it into a car crash.”

There is no denying UCL is an academically intensive environment which certainly doesn’t make any of these circumstances any easier.

Denise Long, UCL’s Director of Student Support and Wellbeing, said: “The health and wellbeing of UCL’s students is our highest priority. The COVID-19 pandemic continues to be a challenging time for us all, particularly our students, who have shown exceptional flexibility and resilience.

“Lockdown measures can heighten feelings of loneliness, isolation or anxiety; now more than ever, it is extremely important to look after our mental health and wellbeing, and to look out for each other.

“Since the very start of England’s first national lockdown in March, UCL’s support services, centred around our Student Support and Wellbeing (SSW) department, have continued to be available to all our students – wherever they are located.”

Dr Barry Keane, Acting Head of Student Psychological and Counselling Services at UCL, said: “We understand that lockdown can be a tough time for lots of our students and can have a negative impact on mental health difficulties, including eating disorders. If you think you need help, we really encourage you to reach out to us. We’ll do everything we can to ensure you get the right support, whether that’s counselling that we offer ourselves, or more specialist support from health care services. Help is available, so please don’t suffer in silence.”

A spokesperson from UCL said: “Any students who are concerned about their eating or who have a diagnosed eating disorder can get in touch with SPCS where our counsellors and psychiatrists can discuss with you your diagnosis and the specialist support available.

“Some students may find hearing about others’ lived experiences helpful. In episode 5 of our Remarkable Stories podcast series, UCL student Alex talks very candidly about her own journey and challenges living with an eating disorder, how she got through it, and how today she uses the experience to help others in similar circumstances.

“Students who are concerned about a friend and their mental health and wellbeing are encouraged to visit our SSW webpages. We have lots of information for students who want to help a friend get the support they need, including how to ask the DMHW team to reach out to them.”

*Thank you to everyone who provided a personal testimony, all names have been changed to protect these UCL student’s identities.

The Tab’s You Matter campaign is putting a focus on student mental health right now. If you’ve got a story you’d like to tell us – whether it’s difficulties with getting uni support, or anything you think we should hear, get in touch in confidence by emailing [email protected]