In an email sent out to year abroad students, UCL says that Virtual Learning and delaying placements are all options that are being considered as alternatives.

In their email they said that all plans being developed in line with their advisory against international travel prior to the 1st of August. UCL added that some host universities have entirely cancelled teaching for term one.

When asked by The Tab for a list of host universities that have cancelled, the university declined to respond.

UCL students are frustrated with the lack of clarity. Many are having huge issues with housing, module selections and finances because they are being forced to delay all their decisions. 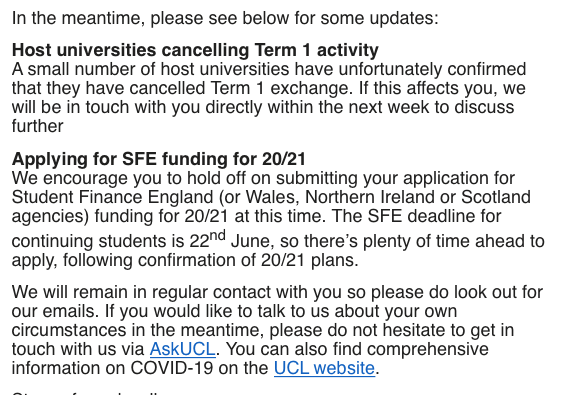 One student who has yet to hear from UCL about whether their year abroad will be affected told The London Tab: “I’m annoyed. They keep saying they’re going to tell us soon but it’s been a month since their last email. We need to know about accommodation.”

History student Olivia told The London Tab: “Everyone is so stressed and we’re in this weird limbo with no clue what to do and no communication. I’ve decided I’m not going because of the pandemic and worries about second waves and social distancing, but I just want to know.”

Students are also frustrated because other universities such as King’s cancelled their year abroad programmes very early on. Likewise, Cambridge have informed students that their teaching will all be virtual for the entirety of 2020, effectively ruling out any years abroad.

Year abroad students are also concerned they will not be able to apply for student finance before the deadline if their status is not confirmed soon. Many are worried about booking flights or paying deposits on accommodation which could cause them to lose up to thousands of pounds if they are then told their year abroad is cancelled. One joint honours student said that because of the situation and the likelihood of teaching moving online they will likely defer, due to the impact on the quality of their studies.