UCL has been discussing the future of the statue of Phineas Maclino, a Black Watch Officer, currently situated in its namesake Student Union bar.

During the consultation of whether the statue should be removed due to its links with colonialism and violence, an ally has appeared for Phineas: A replica statue named Phineas II.

Phineas II was the mascot of Wits University, Johannesburg, and although he was decommissioned as the official mascot in 1971, the statue has been an important part of campus life since 1923.

The South African university has taken a different approach to the historical significance of the statue. Adam Habib, vice-chancellor of Wits University, warned UCL students that by taking down the original statue, they risk “cleaning history.”

“Don’t get rid of Phineas,” Adam Habib told The Times. Instead, he suggests contextualising the history of the statue, “so that it tells the modern story.”

“Put a plaque underneath telling the story of how fear can get human beings to create the most atrocious political systems which oppress people based on collective identities,” he offered.

He describes of his own university: “We are not in the business of destroying memorials and monuments”, stating that this is a “crude populist response.”

Despite the past importance of the statue, today Phineas II is little more than a feature of the universities history. A university representative told The London Tab: "Whilst some Wits alumni may still have memories of the old mascot, most of the University’s current student body probably do not know its history or that it exists in a corner of the University today."

Phineas II was replaced as official mascot for Wits University by Kudos Kudo due to, as the university describes, his "murky past". Despite this, Phineas II remains on campus in the Wits Alumni Lounge and Pub. 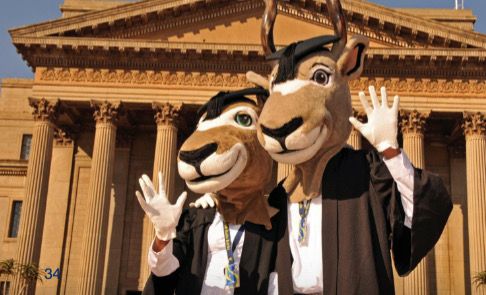 The proposed removal of the orginal Phineas from the student union bar suggests that UCL sees the history of Phineas Maclino as more than just a "murky past". However, perhaps the two-fold approach of not removing the statue from campus altogether, but decommissioning the figure as an official mascot, will be a reasonable solution for divided UCL students.