There were over 300 staff who on strike, supported by over 100 students throughout the day.

The strikes began at 4:00am in line with first shift of the cleaning staff.

They began by gathering round the main picket line outside the Malet Place entrance to UCL Campus.

The union argues that outsourced employees receive worse sick pay, pension, holiday pay and parental leave than those directly employed by the university.

Ahead of the strike, the union balloted almost 300 workers over their terms and conditions, as part of its campaign to end outsourcing and zero-hour contracts at UCL.

It demands the facilities management companies that manage the security and cleaning contracts, Axis and Sodexo, give the outsourced workers the same terms and conditions as UCL’s direct employees.

The strike heading down towards the Student Centre

With raised spirits they began marching around Gordon Sqaure at 10am this morning. Equipped with drums, loud speakers, horns and microphones these workers call for justice from UCL.

Students could hear the strikes in the Archaeology Library whilst they were still at Malet Place. Shouts of "Shame on UCL" and "In House Now" could be heard all over Gordon Square.

Kitty Rose, in Gordon House at the time, described how the commotion meant that "the lecture was interrupted as we all went to look out the windows, there were loads of horns and flags flying."

They moved to the Student Centre where they were joined by speakers including Owen Jones, Guardian Columnist and Labour Party activist, Gordon Nardell QC, Labour Candidate for Cities of London and Westminster, and John Moloney, PCS Union Assistant General Secretary.

In his speech Jones said: "We currently have a government which has forced workers to pay for a crisis they have nothing to do with, for over a decade and driven so many workers into precarious conditions all across this country and we have to fight like our lives depend on it – not just to defeat the employers but to defeat a government that represents the bosses. We have got to fight to bring this government down!"

Outsourced UCL workers have occupied the student centre – fighting for the rights that every worker, without exception, should enjoy in one of the wealthiest nations on earth. @UCL shame on you!@IWGBunion pic.twitter.com/u7MfNN3ViH

They then marched through Campus, stopping at the Institute of Education where many of the workers gave personal testimony. IGWB President Henry Chango Lopez gave a speech on the importance of strikes like this, stressing that "outsourcing means exploitation".

The Tab spoke to two members of the security team who between them had worked at UCL for two decades. Both began their contracts employed by UCL as 'in house' members of staff but since they began working they have been outsourced to security company Axis.

They said since the handover "working conditions have been declined rapidly and there is no longer an equality between in house and outsourced staff."

They raised issues regarding sick pay, as staff are not paid for the first three days of illness and then have to "jump through hoops in order to get the pay they deserve".

For them they said that their key aim was simply to "have a forum where they could express their concerns and feel as though they were being listened to by UCL."

At present, UCL do not acknowledge IWGB being an official union representing UCL staff. Many workers told us that to "simply have their union recognised by the University would be a step in the right direction".

However, UCL does recognise the workers union 'Unison', even though they represent less than 30 per cent of the Security Workers at the University as the IWGB have 120 security members. 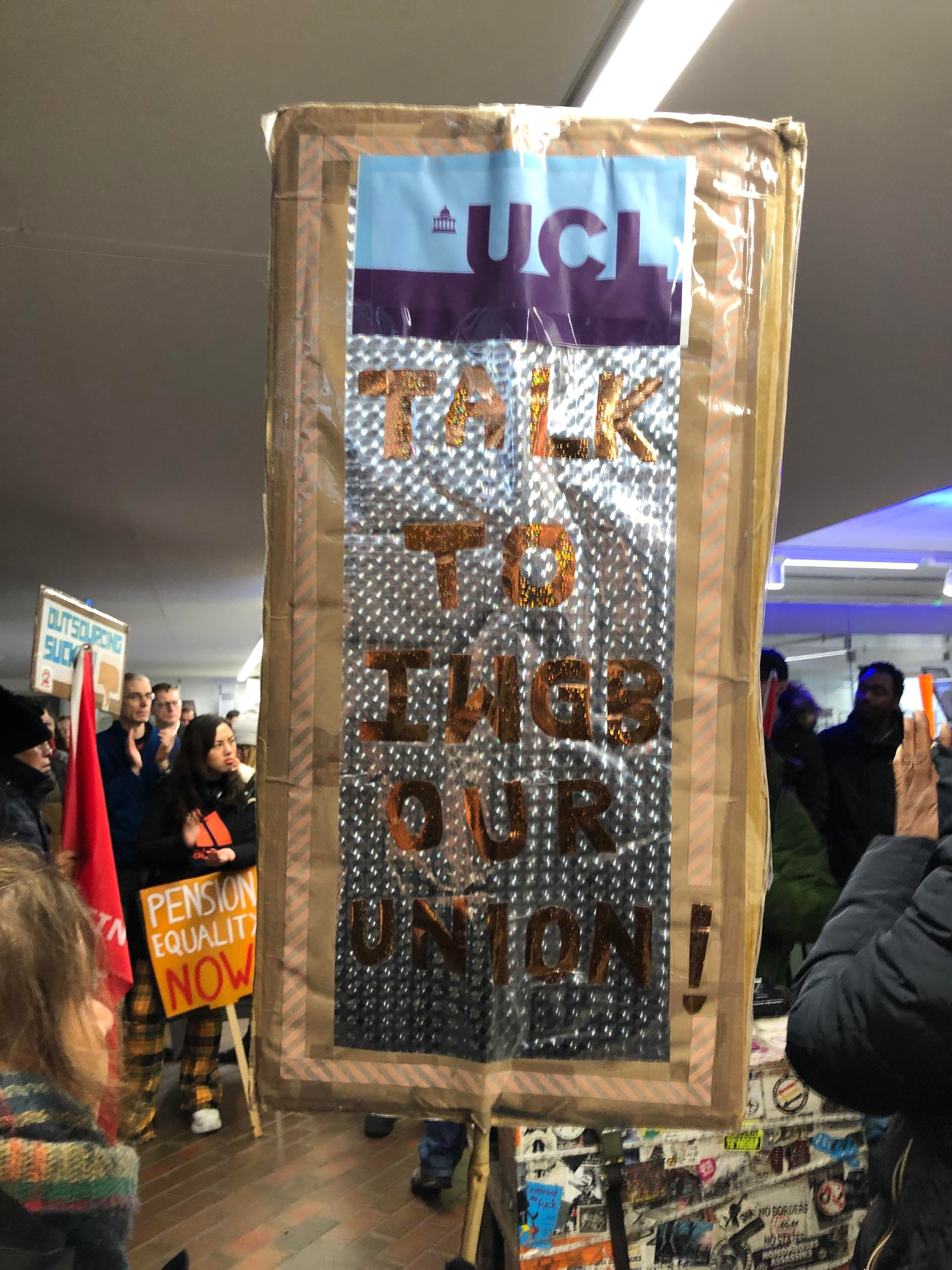 A banner from the strike

In light of the issue that so many of these workers are taking with management, they claim agencies merely see their staff as being "numbers rather than human beings".

They told The London Tab how after the bomb scare in the science library last year, the staff on the ground who dealt with the situation were not acknowledged at all, whilst the UCL Provost invited Axis as the management company for a formal dinner.

We asked Gravity Global to comment on Axis' position with their workers. They stated: "Due to client confidentiality, Axis is unable to comment on the ongoing negotiations with Unison, the officially recognised union within UCL, at this time."

Likewise, when we contacted Sodexo they did not acknowledge the IWGB, but they did highlight the internal changes they will be making within employee contracts:

"We have been working with UCL, our people and recognised trade unions to address their concerns. All our employees are already paid the London Living Wage and it has been argued that they will receive the same or equivalent pay and benefits as directly employed staff. As a first step, Sodexo staff will receive the same holiday entitlement as UCL's directly employed staff from December 1st 2019."

The London Tab also exclusively spoke to IWGB President Henry Chango Lopez . He told us of how the IWGB's efforts in boycotting in Senate House was successful in abolishing zero hour contracts for outsourced worker for University of London employees, and how he hopes that they will achieve the same at UCL.

He emphasised how dedicated those workers who came out on strike were, and, how any donations towards the strike hardship fund would be greatly appreciated.

Around 100 students came out during the day to stand with the strikers. Matthew Lee, a representative of Justice for UCL Workers told us how important the marches are and how important it is that they get the backing of the students.

He also raised that breakfast talks are held between workers and students every Friday morning at 8:00am which anyone is welcome to attend.

Students from SELCS had also been shown the film Limpiadores by their lecturers, educating them about the strikes. They also told us how supportive their department had been towards the workers strikes. Similarly, during the march, workers stopped outside the Anthropology Department and SSEES to thank these departments for all the support they had given the IWGB. Staff from the IOE department, members of the UCU, came out in solidarity of their colleagues.

The march reached its peak at Bidborough House, home to UCL estates. Strike leaders encouraged everyone to make as much noise as possible, music was blared, people were dancing, drums were banged in order to gain the attention of UCL administration. 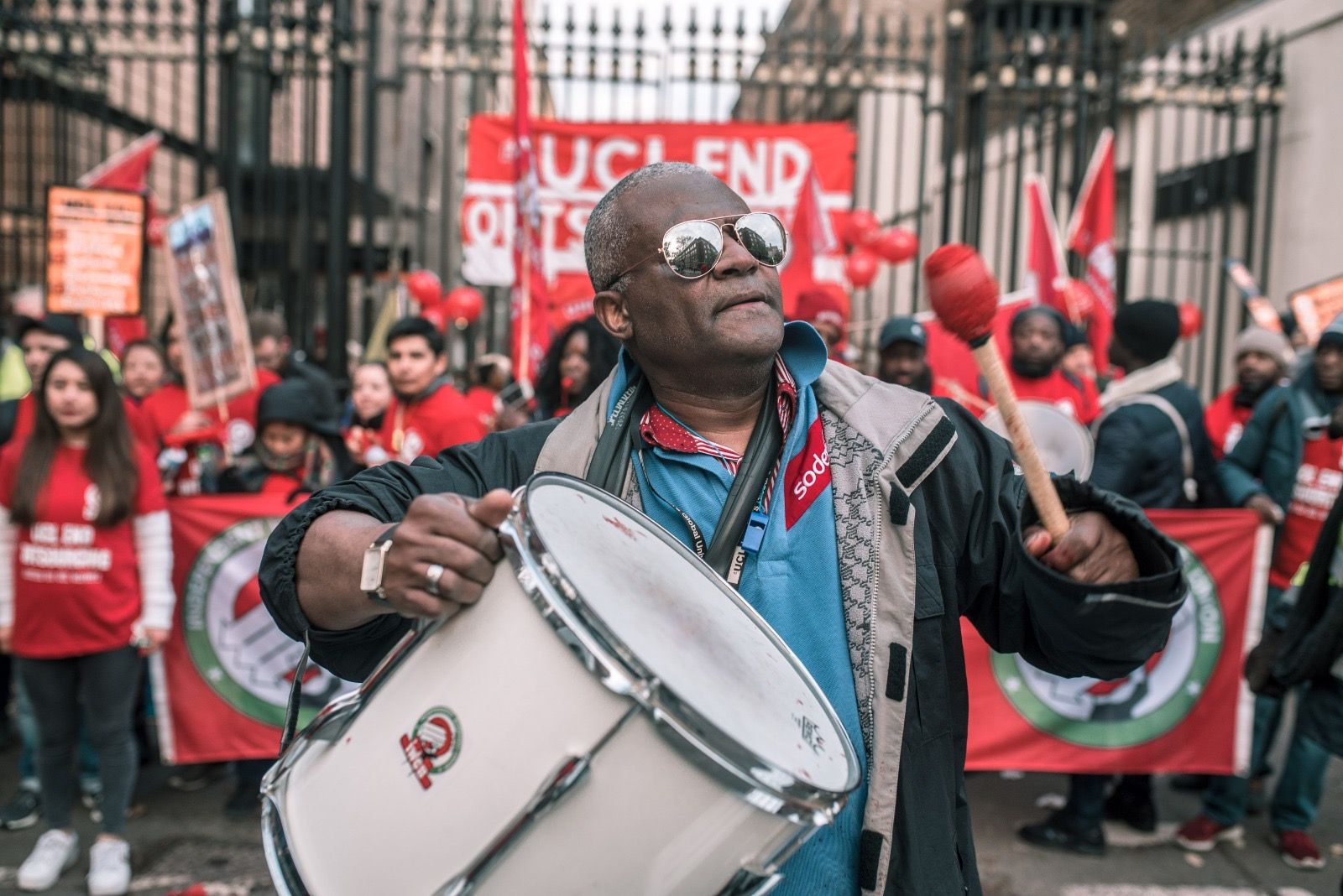 A spokesperson for UCL told The London Tab: “UCL has committed to ensuring that security, cleaning and catering staff will receive the same or equivalent pay and benefits as directly employed staff, following constructive negotiations with our recognised trade union UNISON.

“Our colleagues working in security, cleaning and catering fulfil essential roles at UCL, on which we all depend. We have listened carefully to their concerns and we are acting. We will continue to listen and respond to concerns raised by our community.”

However, the IWGB do not believe that their response is satisfactory considering the current lack of equality for employees. Due to the university's lack of response to their demands, Jason Moyer-Lee confirmed in his concluding speech that the IWGB will be striking again on the 4th December.