Can we all stop freaking out about women’s only gym hours please?

If you've been anywhere near Facebook recently, you might have noticed that Bloomsbury Fitness have introduced women's only hours (07:30-09:30 Wednesday mornings and 18:30-20:30 on Sundays). And some people aren't exactly happy about it… 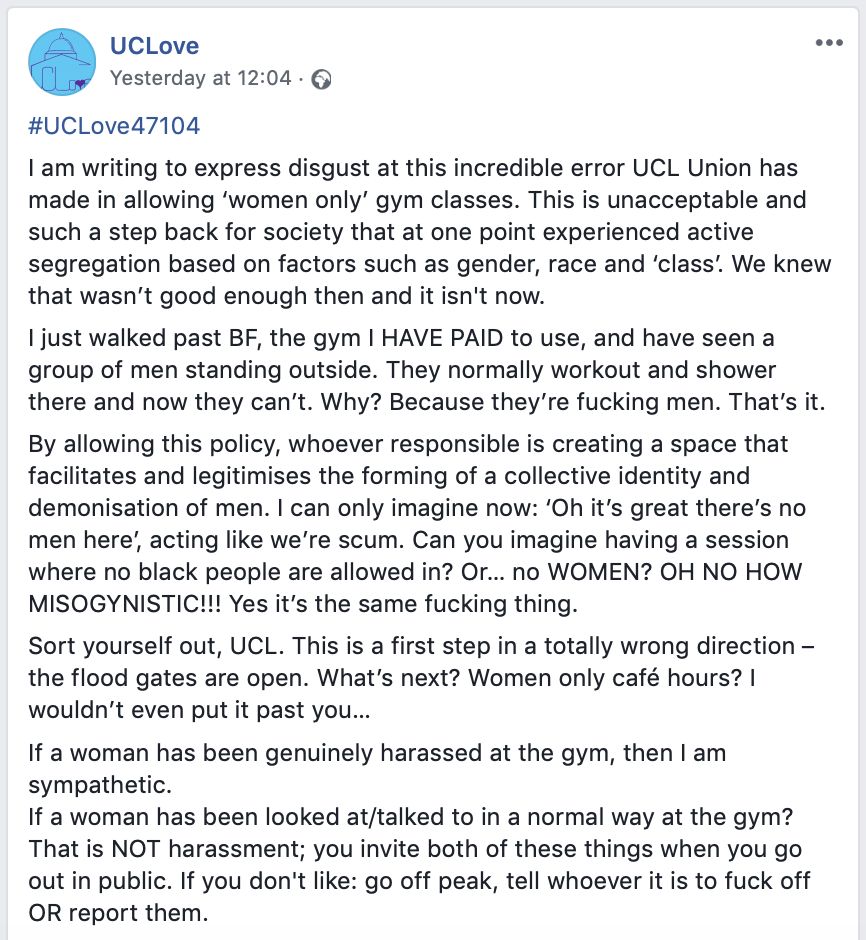 In all fairness, there are a couple of valid arguments against women only hours in the gym. The helpful people on UCLove have pointed out that women shouldn't have to feel uncomfortable in gyms in the first place are quite right. Unfortunately, that doesn't change the reality…

Also it is true that it is not only women who feel uncomfortable in the gym; men to can feel intimidated too and they're not being given separate hours.

But come on guys this is not the end of the world: the Union is only restricting access for four of the thirty-five hours a week that the gym is open – and the Sunday hours fall outside the gym's previous opening hours anyway.

UCL is committed to increasing female participation in physical exercise, as evidenced by their work with the This Girl Can project. These new, dedicated hours at the gym are an attempt to increase female participation, as some women feel intimidated or uncomfortable exercising in male-dominated spaces, which Bloomsbury Fitness undeniably is for the majority of the time.

A spokesperson for the UCLSU has said:

"Our Sabbatical Officers, Abeni and Rothna, have led the initiative for women’s only gym hours working closely with our operations team, however creating women only exercise spaces isn’t new for the Union.

"We believe creating women only spaces will encourage more women to be active and we’ve proved this over time with our Project Active initiative."

"We’ve had lots of feedback about this, both positive and negative, and we’ve made some adjustments to deal with legitimate concerns. For example, the Sunday session now takes place outside of the usual gym hours."

"Only 2 hours a week (Wednesday mornings) take place in the existing gym opening hours. We were careful to choose times that are typically less busy so disruption is at a minimum. Some people seem to be angry about the principal of this, but we’re proud this change has been led by elected students and is based on evidence that women only activities work."

They have a point

These measures aren't perfect, but they are a very real attempt to make the university a space where your gender does not impact how (un)comfortable you feel working out. The sessions have averaged about 30 people so far, which is pretty impressive considering one of them is at the crack of dawn on a Wednesday.

The Union has confirmed that these sessions are a permanent fixture, rather than a trial, but does insist they monitor and regularly review Bloombsury Fitness Operations.

People are quite right in saying that, in an ideal world, we wouldn't need them. Unfortunately, no matter how good the new Student Center might be, we aren't living in one.