The story behind UCL’s enigmatic strawberry loo: We investigated the mystery

Haven’t you ever wondered?

For anyone who has ever entered the third floor women's bathroom at 25 Gordon Street, a strange sight awaits. In the middle cubicle lies a toilet so strange it may make you look twice. It's the famous Phineas strawberry loo, revered and loved by all who gaze upon it.

Third year Mari de Soissons says "When I go in I’m always drunk so I’m like, I came in for a piss not a fruit salad", whilst her flatmate Grace Pitkethly takes a more cynical stance, remarking "the toilet just confuses me, since I like uniformity". The strawberry loo, iconic as it is, is at the forefront of the bar-going UCL population's consciousness.

When it was finally acknowledged on UCLove several weeks ago, many more who had previously been barred from entry into UCL's least exclusive secret were let into the fold and I knew exactly what I had to do. My degree could wait, for it was my destiny to solve the mystery of the strawberry loo.

Where did the strawberry loo come from? Does anybody at UCL know? Is the truth out there?

19. Phineas Bar, 3rd Floor, 25 Gordon Street ? . “Doctor, Doctor, I’ve got a strawberry stuck up my bum” “Oh I’ve got some cream for that” . This is the loo we all know and love. The one you’ve fought a drunk netball girl over. The one that makes your bottom feel like a dainty fairy princess atop a small shrub. It’s the Phineas strawberry loo. . Allow your rear end to be graced with this ethereal loo seat and your problems will float magically away. . Flora & Fauna: 10/10 Use as actual drunk food: 0/10 Eduroam: who cares you’re already pissed Appropriate use of union resources: 7/10 Drunk, sloppy, Phineas pooing opportunity: 2/10(wouldn’t want to ruin that perky fruit) Terrible joke opportunity: 10/10 Strawberries aren't technically berries but "aggregate fruits": 10/10 Overall: ⭐️⭐️⭐️

My first thought was to ask the bar staff at UCL. Cora Burridge, a Phineas bartender and fourth year student, offered to ask her colleagues, which seemed as promising a lead as any. Alas, it proved to be a dead end – not one of the Phineas bartenders knew anything about the origins of the mysterious strawberry loo.

Next on my list was talking to friends who had graduated, to work out when the earliest memory of the loo was. I was limited in social circle to only students whose time at UCL had overlapped with mine, but was able to track the loos back to at least 2012. So now I knew an approximate date of arrival, but there was still no explanation as to why…

I was stumped, but not ready to give up yet. Where does anyone at UCL go if they want information/gossip? Naturally I headed to the CSC Common Room. My first stop in the CSC was Vojta Smekal, second year Psychology and Language Sciences student, union employee, and gossip extraordinaire. Upon dropping by the front desk, Vojta directed me to a certain Joanna Pulford, Venues and Entertainments manager for the UCL bars.

Despite being on annual leave when first contacted, Ms Pulford was able to shed some light on the situation. She emailed back almost instantaneously to let me know that whilst she didn't have exact details, she believed that the toilet seats had emerged during the Students' Union's last major refurbishment. 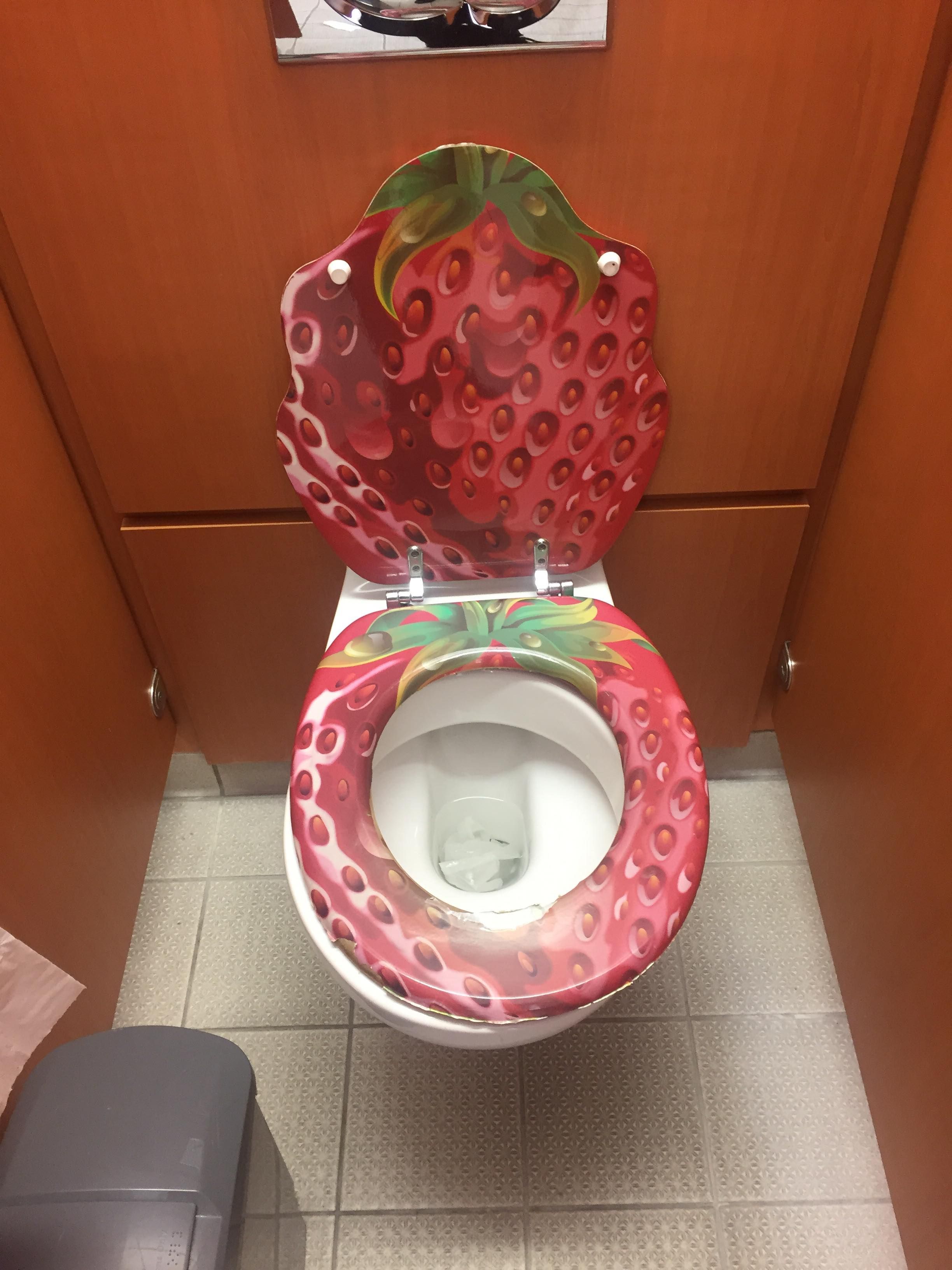 More interestingly she remembered that the strawberry loo was no lone wolf, but rather one of a set of novelty toilet seats. I pushed for further information to little avail. Ms. Pulford remembered a green glittery toilet seat, but that was the extent of her recollection. A quick Google search showed the last refurbishment occurred when the infamously named Kriss Akabusi Pleasure Lounge had been converted into the Wolfson Social Study Space in Summer 2011.

This fitted what I knew so far. It appeared that at some point between being installed in 2011, and my friends starting at the university in September 2012, the toilets had mysteriously vanished. I was left with more questions than answers.

Bid farewell to the Kriss Akabusi Pleasure Lounge tonight with a £1.20 draught beer or cider to help drink the bar… http://fb.me/Hga76AEL

What were the other seats in the collection? Why did the union invest in them? How sturdy did the the strawberry loo seat have to be to outlive its peers by five years? And more ominously: where did the rest of the novelty loo seats go? What awful happenings had the solitary strawberry loo witnessed? I had to find out.

I returned to the CSC to beg Vojta for more leads. He reluctantly said a certain Johnny Glover had been employed the longest at the union. After surreptitiously hanging around the CSC front desk for several minutes, Johnny emerged from his office. It was now or never.

"Excuse me, are you Johnny Glover?" I asked, a steely determination in my eyes.

Johnny looked surprised that a student could be so passionate about researching a loo, but I pressed on and asked him to tell me all he knew about the toilet's origin story. Things were starting to look promising. Whilst Johnny didn't know much more than Ms Pulford, he assured me that he'd contact an old colleague of his, who had left SUUCL the year before. I left our impromptu meeting feeling like I was on the verge of a discovery, but alas. It was not meant to be. Even Johnny's mysterious ex-union contact couldn't reveal the secrets of the Phineas women's bathroom. Johnny looked like he wanted to help more, but was only able to speculate that a mixture of Sports Night and general union bar activity had rendered the rest of the seats unusable.

The journey had come to an end, and I was still no closer to discovering the truth behind the strawberry loo.

As they say – some mysteries are best left unsolved.

If you have any information regarding the origin of UCL's, please come forward. Drop The Tab UCL a message on Facebook, or email [email protected]