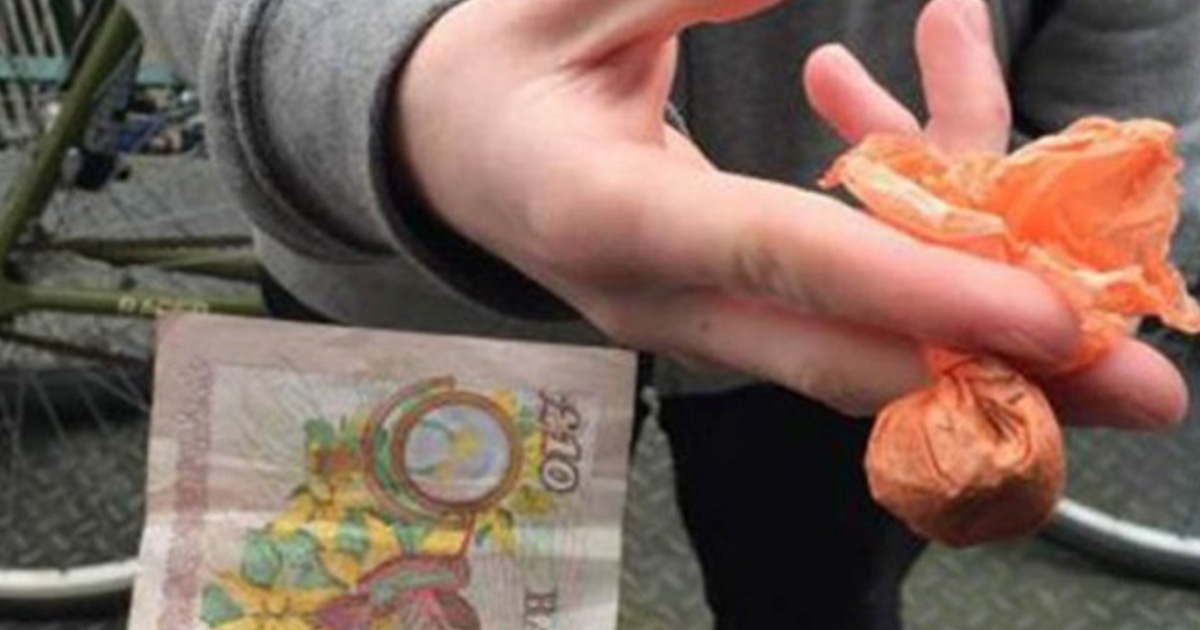 ‘My eyeballs were melting’: UCL students tell us about their worst trips

‘I was so sweaty I had sweated through my shorts and shirt, and was clinging to my friend for dear life’

Everyone has a story about that time they popped too many pingers, or had the worst k hole. We spoke to UCL students about their worst drug experience.

I had taken something around 100mg of MD at a house party and was just coming up when I decided I’d leave with some friends to go out in Shoreditch. To keep a long story short, I ended up smashing a stupid amount of lines of what I assume was coke (but in reality was probably lidocaine and levamisole because it always is), and because cocaine just makes me ridiculously ballsy, I decided bombing another ⅙ of mandy was a really great idea.

For a while it was great, everything was ridiculously intense, and then out of nowhere I just started freaking out and convinced myself I was going to have a heart attack from all the uppers and that I was going to die. I looked absolutely disgusting too, I was so shaky and jittery – also my teeth kept chattering which was totally grim. I dragged this guy who I had met at the house party out to the smoking area with me and forced him to try and calm me down while I chugged water and chain smoked – evidently this guy was an actual saint.

This didn’t really work because at one point when I felt sweat drip down my cheeks I just lost my mind and convinced myself I had got so hot my eyeballs were melting out. So we went inside to get my friend who I made walk me the entire three miles back to her flat because I was pranging way too badly to even think about getting the night bus.

My ex-boyfriend and I were doing mushrooms in Amsterdam, I’d done them before but he hadn’t. I got super cocky about it and had them all really quick. Next thing I know I’m throwing up everywhere and he’s tripping balls. I don’t want to be sober so go grab a couple of joints. I’m high as a kite and he asks for a couple of tokes, which I go along with. But then he completely whities and starts to sweat through his t-shirt, jumper AND coat.

When that ended I witnessed a human eat more than I’ve ever seen anyone eat in my life – it was insane. Although I should point out the first time I did mushrooms was one of the best experiences of my life, you just have to do them right. 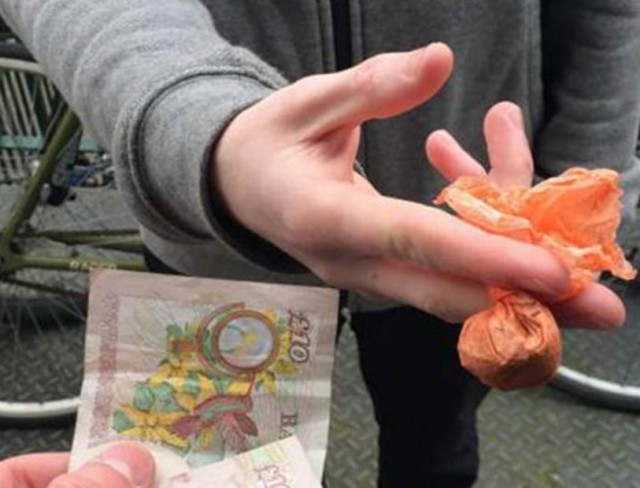 I was at a music festival in Spain with a friend I was trying to impress, so decided to drop for The Prodigy. I decided to bosh back a horseload of MDMA in one go and came up so quickly it was honestly terrifying. I had a good five minutes of enjoying the end of Noel Gallagher’s set, and then as my friend started leading me through the crowd I started panicking and begged him to go find somewhere to sit down and have some water so I could ride out the anxiety. I started hyperventilating and I vomited in my mouth way too many times, so we decided we should find the medical tent because I was in a seriously bad state.

I could barely hold myself up, was so sweaty I had sweated through my shorts and shirt, and was clinging to my friend for dear life. When we finally got the medical tent, it turned out that nobody spoke any English and we were too wrecked to use any of our incredibly basic Spanish to explain what I had actually taken and I was starting to freak out horribly. They whipped out a needle full of fuck knows what and I went nuts, everyone was yelling, I was screeching “no hablo espanol” over and over, people were holding me to the chair I was trying to get out of.

I’m not really sure how, but I know we got out of there without me having to have any injections and we dragged ourselves back to the campsite where we bumped into our other friends who seemed to think the whole thing was incredibly annoying as opposed to fucking terrifying. I made my friend (who I was still clinging onto) walk me round the entire campsite countless times, and I ended up sat in a camp chair talking to people who weren’t there whilst my friend laughed at me.

I was with my flatmates staying in and trying some MD – I was a seasoned pinger but they’d never tried so were a little nervous about it. I wanted to show off a bit and was excited for them to experience the wonder of mandy. As a result, I got cocky and dabbed a load after a couple of big bombs, then it all came up at once. My body temperature and heart rate were suddenly completely fucked, I couldn’t stop shaking and was pouring with sweat. I had to have about four showers to cool off and about two hours later I was normal again.

That was fucked up though.

So a friend and I decided to take LSD in the week after exams, we’d had it before and liked it so we were pretty confident. We took it at four in the afternoon on Friday. The trip started really well, we were in my bedroom and everything was absolutely funny, we were listening to really truly music and I remember dancing in the toilet for a solid 10 mins. Anyway my friend suddenly became really unresponsive, he sort of lay on the floor and just looked really terrified, his eyes were wide-eyed and he kept clutching my bed. I became really anxious and didn’t know what to do. After a while I was tripping so hard I was gibbering on a chair seeing my face in a kaleidoscopic pattern on the ceiling.

This lasted for what felt like days, I had tried at first to keep my shit together but soon the effect of the trip was just so fucking strong that psychologically I was wrecked. Anyway, my friend came out of his trip and was in a really angry mood, he didn’t really talk and suddenly left. I was still tripping and became terrified. Would it ever end? By this point it was four in the morning and, after throwing up and basically tearing my room to shit, I ran to the hospital convinced I was dying.

I ran into A&E and started screaming this was it. The staff didn’t really know what to make of me and after a while I said I’d taken hallucinogenics. The nurse staff were absolutely fantastic, it was a Friday night so of course there were loads of drunken and drugged up idiots like myself there. Nevertheless, this old Caribbean nurse sat with me and calmed me down until the early hours of the morning where I finally managed to sleep.

I was having an über boozy one when my mate offered me a dab or two. Naturally I accepted the offer and had a small amount, but it just felt really strong, probably because of all the alcohol. I was fine until 11ish the next morning, but then all of a sudden my temperature went through the roof and I was switching between shivering and boiling hot.

I had completely collapsed on the bathroom floor and genuinely couldn’t move for about three hours. I finished throwing up at around half four that afternoon. Then it got to the stage where I genuinely thought I was going to die and was googling deaths from MD and alcohol on my phone in between passing out.

We were in Vauxhall having a few quiet drinks but somehow it got to five in the morning.  A friend and I decided to catch the N436 into the danky depths of vauxhall, and went on the search for some of the good stuff. Not too long into the hunt, they were offered the deal of a life time. “£6 for 5 pills. Bargain.”

All went swimmingly. But we were then confronted with the prospect of Vauxhall’s unsurprisingly stringent door policies. After trying and failing their way into a number of Vauxhall’s hotspots, we hid the pills in a private place (best left to the imagination). Job done, or so we thought. Once in the club – and after a bit of an uncomfortable manoeuvre – we’d dropped and were ready to get funky, water bottle in hand. A full pill was the designated dose for a night long of shuffling. At those prices, it would be a crime not to…

But, as is too often the way with these things, all was too good to be true. After an hour of half-hearted two stepping, we weren’t feeling funky. When the sun came up, we braved another half each. Eventually, feeling fairly anaesthetised but not nearly trippy enough, we acknowledged we’d been fobbed off, accepted our cruel fate, and headed home.

It was only when I, a Medic, got back and compared the merchandise with our own pharmaceutical stash, that I noticed the pills’ suspicious similarity to Sainsbury’s own brand cocodamol. There was nothing left to do but get into pyjamas and put on the only DVD to hand – Harry Potter and the Order of the Phoenix.

I fell asleep to the soft screams of Sirius Black. The next morning was full of disappointment, but free of headaches, and in an effort to reach some sort of closure, we left this message with the culprit of our anti-climactic night, whom we’d appropriately named after <Eastenders character, Peter Beale: 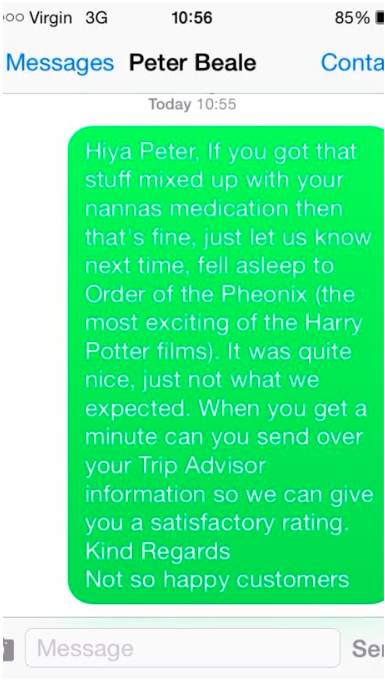