An email gaffe by UCL Drama Society has resulted in three Culture Club candidates being handed official warnings by the union.

Committee members from Drama Soc are standing for election to the student trustee board, the body which oversees the management of UCLU.

Last night the union received a complaint over a Drama Soc circular that encouraged members of the society – one of the biggest at UCL – to vote for Jeremy Wong, Jasper Bartlett and former-Film Soc President Luke Blackett.

The three candidates have campaigned together as a Culture Club bloc.

Returning Officer Mohammed Fahed quickly confirmed the email broke election rules, which stipulate that “candidates must not be endorsed by clubs nor societies”.

The candidates hope to win a better deal for clubs and societies, and have criticised UCLU’s ‘poor communication’, ‘lack of transparency’ and ‘mismanaged bureaucracy’.

However, their election campaign has been thrown into controversy after Drama Soc secretary Josie Charles used the mailing list to endorse them.

“A few Drama Soc committee members are running for the position of Student Trustee – they’re hoping to get on a board of students who basically give feedback to the union on how to improve”.

‘‘It would be great for the society to have as many supporters of the arts on the Trustee board as possible, so please, give up 2 seconds of your time to VOTE for them!’

Realising her mistake, Drama Society Secretary Josie Charles scrambled to correct the error by sending the mailing list another message, where she backed the candidates in a personal capacity:

‘Apologies, on the last e-mail it looks as though Drama Soc is endorsing Student Trustee candidates, which we’re not allowed to do.’ 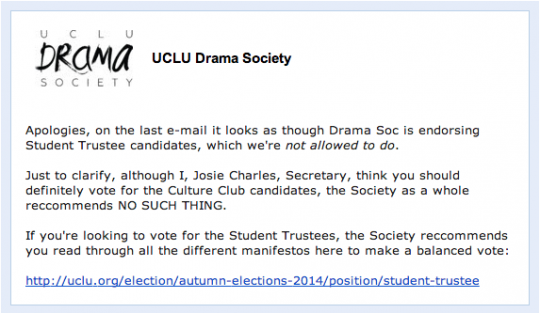 ‘Just to clarify, although I, Josie Charles, Secretary, think you should definitely vote for the Culture Club candidates, the Society as a whole reccommends (sic) NO SUCH THING’.

However, the damage had already been done as union rules specify each candidate is responsible for the actions of people who campaign for them.

This afternoon, he called Wong, Barlett and Blacket to issue them an official warning.

Fahed told the Tab: “I acted by giving the 3 candidates an oral warning”.

“It could have been a written warning but I preferred to speak to candidates and listen to their views first.”

Fahed, who serves as Union Chair, clarified that the candidates did not ask Drama Society to promote them – but explained they were still responsible for any campaigning done on their behalf.

He also explained Drama Society Secretary was not aware of union rules on endorsement: “she thought (the message) would help, but she harmed rather than helped at the end”.

The union has not punished Drama Society who sent out the emails.