As part of The Tab’s election coverage, we meet 4th year German and History student Hannah Sketchley, who is this year running unopposed for Democracy and Communications Officer.

Hey Hannah! So who or what is a DCO?

Well, obviously it’s split in two: Democracy and Communications. The communications part is the front facing position of the union (sounds a bit dirty!). It involves not just sending that email but making sure the way the union communicates with you is accessible and open. The democracy bit (obviously) refers to all the democratic structures and positions and how the political bits of the union work, such as who gets elected onto what. Not as in picking them but in terms of positions and makeup of structures of the committees.

Why are you running and what can you feasibly change or achieve in your new role?

I’m running because, for better or worse for my social life, I’ve been involved in the union since I got to UCL, either by active role (sitting on council in my second year) or more indirectly (by editing The Cheese Grater this year) and I feel like this is a logical progression. I can use everything that I’ve learnt and loved about the union to good effect. I’m hoping in particular that my media policies are feasible and realistic and I really would like at the end of my year to say that I’ve achieved what I set out to do. 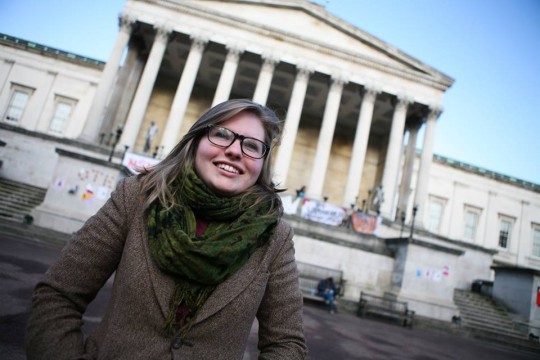 Look at those eyes. They’re democratic ones.

What would you say to those apathetic towards the sabbs? Should we care about the outcome of the elections?

You’re going to come into contact with the union a lot whilst you’re here, so you might as well have a say in how it’s run, and vote. That will control everything from what we run in referenda, like whether or not the union takes a view on the Israel-Palestine conflict, down to whether you can do a certain type of weightlifting in the gym.

Most universities have 6 sabbs. UCL, since last year, has 10. Do we need this many and is it a valuable use of fee payers’ money?

I think so. I’m actually really pleased that we’ve got liberation sabbs because I think one of the marks of a good student union is how we treat people who outside of the university may be somewhat excluded and discriminated against. I’m proud that we have these officers who can attempt to deal with this by giving these people a point of contact and making it very clear that we campaign to tackle these issues.

It’s been really interesting watching the new sabbs carve out their own niches and find their own way of doing things. 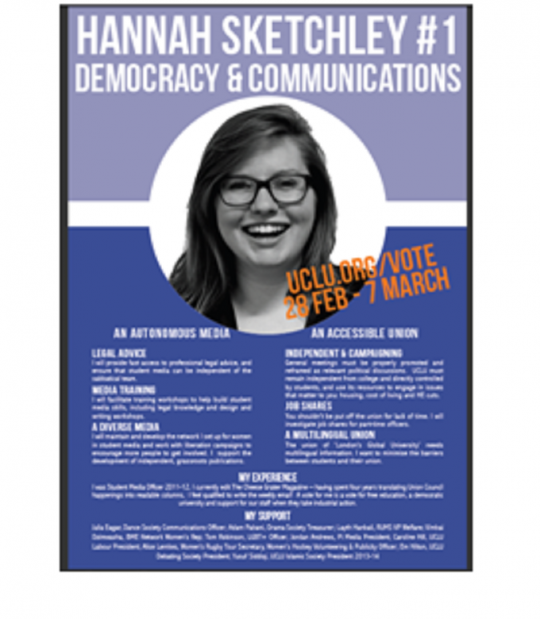 Beth Sutton’s certainly found her own way of doing things, involving scuffles with the police and being dragged out of a George Galloway debate. Has she acted in a manner appropriate for a UCL sabbatical officer?

Yes, because people voted her in on a very clear platform. I’d want a women’s officer to stand up against rape apologists and people on campus. People may say that her methods should be more polite or she ought to act in different ways but that’s up to them. In terms of confrontation with the police, what I’ve learnt from university is that this doesn’t make you a bad person. People need to lose this mindset that if the police say something’s wrong it isn’t, because in most of the cases I’ve seen, it’s been the other way round.

Running unopposed must mean you can take your foot off the proverbial gas a little. How does that feel?

Good! It means I didn’t have to begin campaigning until voting opened. I don’t really want my face to become wallpaper around campus for more than a week. You do campaign less if you’re unopposed but obviously that doesn’t mean you shouldn’t campaign, especially for this position. It’s not my fault that I’m running unopposed – I didn’t kill off any opponents – but it also shouldn’t be taken as a given. 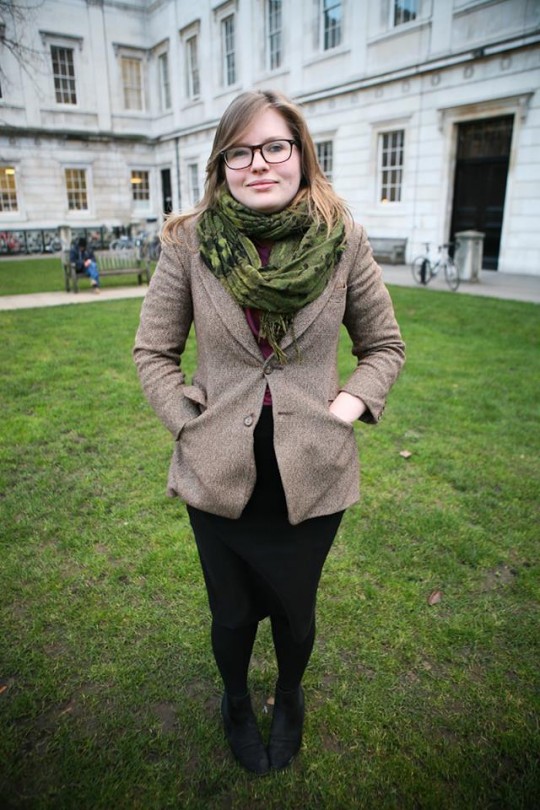 Hannah Sketchley is an anagram of ‘Healthy Snack Hen’. What is your favourite flightless bird?

Don’t neglect the emus. As DCO, your role will involve some responsibility of the budget. If The Tab had £1 million to change UCL, we’d transform the Quad into an all-weather arena reminiscent of 1990s hit BBC children’s show Get Your Own Back, bringing back Dave Benson-Phillips to do regular stints on Tuesdays and Thursdays. What would you do with the money for London and UCL?

I would bump up the student media budget and continue to fund a pan-London political students’ union and support media outlets like The London Student. I’d probably also buy loads of animals with the money left over. Is that more of a Tab-appropriate answer?

You know us too well. Okay, so using your future title ‘DCO’, give us 3 words beginning with these letters which best sum you up.