London Culture on a Student Budget

This week, Georgie Coupe takes you into the wonderful world of Frank Bowman at the Tate Britain After meandering through the many corridors and rooms of the Tate Britain, Frank Bowling’s work comes as a surprise, it’s modernity and colours greatly contrast the more traditional collections in the surrounding galleries. The title of this collection is, ‘ Drop, Roll Slide, Drip… Frank Bowling’s Poured Paintings 1973-1978’; the reason for this is pretty self explanatory. The enormous portrait canvases display beautiful melanges of poured colours, with the main focus on warm pinks and reds and yellows.

There is an evident importance of light in his pictures due to titles such as Crevice Reflecting Morning Light and Blaze. A painting named, Pandora’s Box is perhaps the most enchanting in this collection, the explosion of chaotic paint gathering in the shape of an atomic bomb creates a sense of destruction and bedlam. 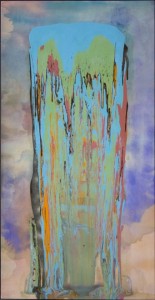 Bowling’s technique of pouring wet paint onto an already wet canvas, ‘wet into wet’ (as he calls it) is also used to portray place. The painting Blaze is said to recall his earlier years in New York and Kaieteur is named after the Kaieteur Falls in Guyana, thus connecting pouring paint with the natural process of water falling.

Born in Guyana, South America in the 1930’s and then educated in Britain, Bowling graduated from the Royal College of Art London and later moved to New York to establish his career further. These years in New York greatly influenced his pouring paintings, they grew in size as more space enabled him to build bigger tilting tables on which to create them; the biggest canvases in the exhibition are from this time.

The exhibition is among many other free galleries and is well worth a look around, I think it is also a light introduction to those less keen on modern art.