After pulling out of Premiership, their first victory gets them back into the winning spirit.

The scent of pine trees greeted the UCL ladies to Wimbledon Rugby Football Club last Sunday afternoon. Their first LUSL game of the season was to be against St George’s, a team of medics who in previous years have proved a challenge for the three times undefeated ULU league and ULU Cup champions.

After a fashionably late arrival and treating everyone to a strip-tease on the side of the pitch, Tonje broke through St George’s slippery defensive line before a quick offload to Captain Jess who scored the first try of the match. It wasn’t long before Tonje was running rings around St George’s again and this time taking the ball all the way to the try line to make it 10-0. 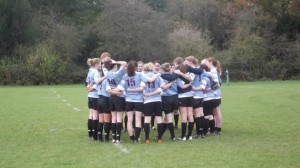 Fantastic runs by the backs and consistent pressure from the forwards ensured UCL were in St George’s half for most of the match. A beautiful try was scored after a series of offloading between Rhi, Jess and then full-back Katy who put the ball on the ground for the team.

Approaching half-time, St George’s defence were pinned to the try line, throwing all they could at Kat, new recruit to the forwards this year, as she attempted to crash through. A break for the forwards eventually came when Vice-Captain Eleanor barged through just after the kick off to the second half.

The final tries of the match were scored by Tonje and Jess to bring the score to 40-0. To 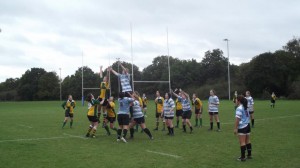 St George’s credit, they did sneak in a try at the end when their hooker threw herself at UCL’s defence and was able to place the ball down. They also scored the conversion to make the final score 40-7.

As a result of having their main kicker graduate last year, this match probably set a UCL record for the number of different people who attempted a conversion. Jess, Tonje, Veronica, Lucy and Rhio all had a go at propelling the ball clear over the cross-bar to no avail.