Ode to My Fit Professor 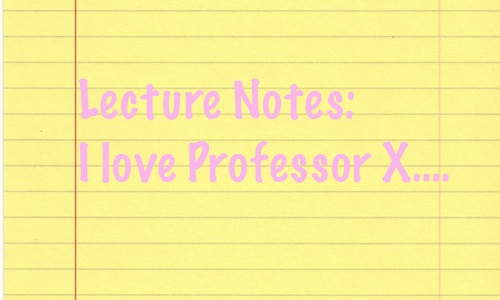 You’ve got to love it when the media find a nice, juicy story to sink their fangs into. That’s why it was so interesting to watch the latest feeding frenzy concerning the story of fifteen-year-old school girl Megan Stammers fleeing to France with her 30-year-old teacher/lover Jeremy Forrest. It ticked all the boxes: moral outrage, terrifying to middle-class parents who stupidly might have thought for a second that their precious little children were safe, and a chance to have a go at the French. It was so perfect I’m surprised The Daily Mail didn’t just implode in a black-hole of angry middle-aged women typing ‘paedo’ in capital letters.

Of course, it would take a fool to weigh in on the situation, it being an utter ethical minefield. It’s the sort of story an opinionated person doesn’t want to touch with a thought-bargepole, there being so many points to consider. For instance how if she was one year older it wouldn’t have been a problem, like the French hilariously thought it wasn’t. Or whether or not a teenager is capable of making a responsible decision about their romantic life. Or how if they’d just waited one year like any barely rational person would have done they’d be free to munch as many non-prison flavoured croissants as they liked.

But what if the situation isn’t teacher-pupil? What if it’s more lecturer-student, for example? Let’s say, hypothetically, that you had a huge crush on one of your professors.  Hypothetically. Just for argument’s sake, you happened to fancy a member of the university staff so badly you found it hard to form coherent sentences in their lecture theatre, to the point where the people next to you start politely asking if you’re feeling okay before desperately try to remember that really scary advert which tells you the warning signs of having a stroke.

What if this particular lecturer had the rare ability of being able to pull off a pair of nipple-high chinos with aplomb? What if they had mental maths skills so quick and refined they left you numerically weak at the knees, sighing a little too loudly across a laboratory that already knew you as ‘That guy who must have some sort of breathing problem as he keeps sighing a little too loudly, but only when Dr. ? walks past’?  (That’s Dr. ? as a pseudonym for the professor, not Doctor Who. Although he’d do. Beggars really can’t be choosers.)

What if they had a sort of military-style haircut that said ‘I’m basically a North-London version of Christian Grey’, but eyes that said ‘It’s okay, I know when to stop. And I’ll buy you chocolate and we’

ll watch Love Actually at least twice a week I promise.’? What if once they’d asked you a question and you’d addressed your reply to their bicep instead of their face and they’d noticed and it had gotten really quite awkward? What about THAT?

Well, the university’s official position, after some incredibly superficial research because X Factor was nearly on, is that such relationships are ‘strongly discouraged’, which is a technical way of saying ‘Go for it! There will be no ramifications whatsoever! It’s basically frowned upon and only losers care about frowns. You’re not a loser, are you?’. Then again I reminded myself that’s what Ross thought in Friends and then he nearly lost his job and got divorced three times and his acting career kind of stalled afterwards, so I thought maybe I should do a little more digging.

After calling the University Welfare Office to get their opinion and getting no reply, which could either mean that they knew I was calling and it was all part of an elaborate web of lies or that it was Sunday and X Factor was nearly on, I decided to end my rigorous investigation, reminding myself that the Ross debacle had also ended in Bruce Willis having a cameo and so couldn’t have been all bad.

So what to do? You’re hopelessly, hypothetically in love with someone in a vague position of responsibility over you and it seems like the whole world, or at least The Daily Mail and some of the higher echelons of UCL employees would judge you with the outrage of a thousand angry priests for it? Well I could answer that, but I’m kind of busy booking two tickets to France.