With two teams being promoted and the other winning the ULU Reserves Cup, UCLU Women’s Hockey talk about their storming 2011/12 season

Being part of a club isn’t always all about the sport. But if you’re Women’s Hockey, playing hard on and off the pitch is a given this year as they begin on a brilliant platform for both.

For the 1st team, their big focus is on the BUCS South Eastern 1A League which is a huge challenge for any club. Having experienced hardship in the same league in the 10/11 season and losing half their players to the inevitable doom known as ‘graduation’, they’re keeping their heads up high and hoping for a bunch of hot new freshers . The team are itching to come stick to stick with arch rivals Imperial and ensuring to crown UCL once again the best team in London.

With regards to players, former Spanish international Isabela De Pedro is set to keep everything under control in midfield and Captain Hannah Newton will form one of the experienced and rock solid defenders to deflect those super shots. However, with the pre-season training programme underway and an increased amount of coaching time, the team will be prepared for anything flung in from any corner.

For the 2nd team, keeping their sticks on the ground and proving they’re worthy of their last season’s promotion is something they’re eager to focus on. The entire team’s incredible commitment to training and regular fitness sessions is sure to shine through, especially as last season’s top scorer, Jane Hallet, takes up the reins of Captain. Apparently, this is a team that can guarantee that the harder they work on their hockey, the harder they’ll party. We decidedly like their style. 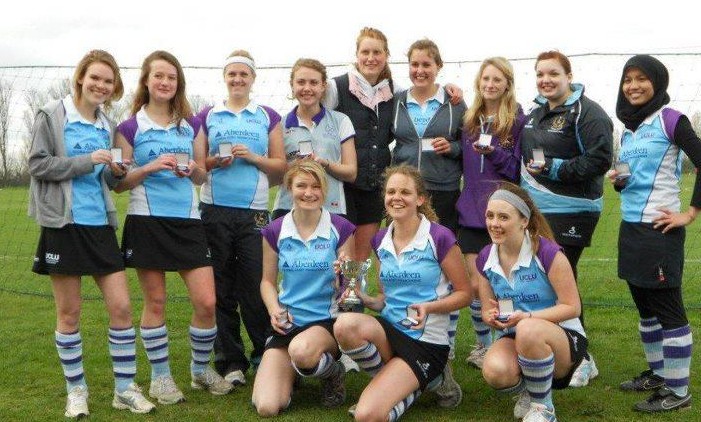 Finally, their 3rd team ended last season on a high of their own. Not only did they win the ULU Reserves Cup Final against Kings Medics, UCL winning 4-3 on penalty flicks, their aims for this season are also to keep RUMS down. If they can do that as well as battle to gain promotion and to defend their LUSL (formerly ULU) title so they can perfect the art of drinking bubbly from the trophy (a very important skill and one which every club should strongly advocate) then it will be a successful season all round. Equipped with Dutch player, Elise Kik, who’s looking to carry on the successes of the Dutch Olympic team and a squad of fun and entertaining players, they’re also going to be playing harder in both sides of life with UCLUWHC.

On the other hand, if, for some people, the sport is a secondary priority to socials (who can blame them?), the club promises an equally demanding social calendar. Last year, socials included a four-legged pub crawl and an always eagerly anticipated Christmas Ball, a standard which they’re eager to raise even more. Similarly, if you’re into the volunteering side, the club is aiming to further increase its support for the local community by holding its second annual summer tea party for older members of the local area. They’ll have a lot to live up to both on and off the pitch this year.

Club President Florence Mackenzie enthuses: “We can’t wait to get the new season underway and are excited to welcome new freshers into our club. With new leagues, members and various events in mind we’re planning to make this year one to remember.”

We wish them and all the freshers who tried out earlier today the best of luck for the start of the new season!