Camden Town is integral to the UCL student’s experience. For all its shady corners, tramp-on-tramp violence and disconcertingly high rat-to-human ratio, it has a dishevelled charm; an aching edginess that’s both fascinating and transfixing. It would be very difficult to avoid the place for the three-or-more years that you’re here for.

Other parts of London are home to fancy pop-up food markets every now and then, but the Camden Markets are a week-long free-for-all of world foods and ultra-aggressive sales pitches. Stalls with names like ‘Indian Food’ furiously compete against other stalls with names like ‘Caribbean Chicken’, practically throwing food samples at passers-by with the hope of drawing them in and making a sale. You won’t find any Michelin stars here, but this isn’t Masterchef – Camden is a fast food battleground.

Arriving at about 8 o’clock on a Monday evening, we managed to hit happy hour, which is when most of the food is a pound cheaper because it’s on the cusp of going off. Result. 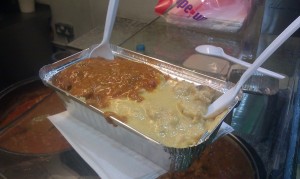 The first stop of the evening was a stall named Indian Kitchen. It was the only place in the whole market that hadn’t lowered its prices; a middle finger to peer pressure, economic hardship and perishable foodstuffs everywhere. Take that, society! For a fiver, we got both curries on a bed of rice in a large aluminium box, and while the combination looked a bit like someone had thrown up something resembling the Maltese flag, it tasted amazing. The sweetness of the Korma offset the relative spice of the Dhansak like a chess-boxing match in the mouth, and everybody was invited. 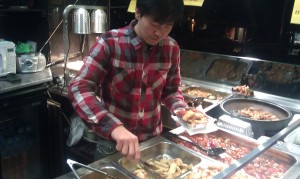 The Indian Kitchen would be hard to follow, but we found its competitor in the form of Hong Kong Chinese Food. This stall occupies a corner on the very edge of the markets, covered in posters which fervently advertise something called “Banging Chicken”. Slightly unwilling to find out what that meant, we approached the counter and asked for an assortment of Chinese goodness – noodles, salt and pepper chicken, beef in black bean sauce for the price of three pounds. This was a veritable steal in itself, but when we told the man serving us that we were ‘food critics’ he gave us a pile of spring rolls on the condition that we “put me (him) on Youtube”.  An important lesson to anybody l 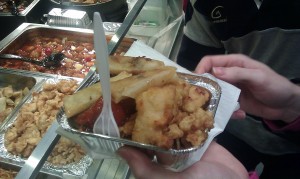 ooking for cheap things: lie about being a journalist. It all tasted great, if a little cold. It didn’t quite satisfy as much as the Indian Kitchen, but all that food for a measly three pounds is not something to be sniffed at.

By the time we finished the Chinese, many of the stalls had begun to close, but a place called Italian Pizza and Coffee was a shining light in the darkness of the slumbering market. The stall owner had stuck a hastily written yet glorious sign to the window: “2 slices £1.80 NOW”. 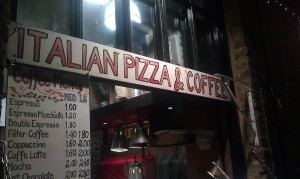 Deal of the night. The pizza was fairly authentic and very tasty – thin and just a little burnt. However, one of the slices had something green and sloppy on top. It was either a slice of green pepper that had turned or one of Camden’s rats met an unfortunate pizza-based end. Still, even if it was a piece of rat, 90p per slice is sublime. While the pizza didn’t pack quite the same punch of taste as the Chinese and Indian, you can get two huge slices here for less than a Tesco sandwich.

When you’re in the markets of Camden, it’s as though the entire world has gathered there to flog band t-shirts, smoking paraphernalia, vintage suitcases and, of course, food. Cheap, delicious, fattening food. The three stalls that we visited just skimmed the surface of Camden’s tasty delights which range from Nepalese to Lebanese to American. And if none of those tickle your fancy, why not try one of Camden’s many fine kebab shops? Camden is your oyster, my friend. Celebrate by eating some oysters.