We spoke to the UoL student behind the Liverfess phenomenon

Will they reveal their identity?

Liverfess, the Facebook page dedicated to publishing the anonymous confessions of Liverpool students, has taken student culture in this city to a new level. At this point, if you aren't following the page do you even go here?

With the recent calls for the admins to reveal themselves, we decided to talk to the mastermind behind the creation of the page, and here's what they had to say.

What made you want to create Liverfess?

'It was around December last year and I was having a tough time adjusting to uni life. My flat wasn’t one of those flats where everyone hung out together, it was more a case of everyone doing their own thing and I had struggled to find a group. I wasn’t going on many nights out like I did back home and I just wasn’t living the uni lifestyle that I thought I should've been.'

'It seemed like fun and I also thought that I could meet people through the page. It seems to have worked out alright, people really enjoy the page and I met one of my best friends through it, who is also the newest and currently only other admin of the page!'

Were you surprised by the popularity of the page?

'Yes and no. I find confessions pages overall to be popular at universities as it gives a space for students to post a whole multitude of confessions from serious to comedic ones. But, it was hard to get the page out there, I sent the link to every student i knew at the time and when the page was small people were less likely to post things as they were only going to be seen by, like, 15 people. Then, one day, the page just started growing like mad to the point where we were coming up to 4000 likes.'

What confessions have shocked you the most?

Why would you touch that though?

What are the positive aspects of running Liverfess?

'I think there have been lots of positives from Liverfess. Many people have sent in posts discussing issues that they may not have been confident enough to talk about with friends or family. I created a separate page, Livervice, specifically for people to submit more serious topics so that they would be more likely to be answered, as there is less spam on that page.'

'Improving mental health is also extremely important to me, and through the pages I have seen that many people have felt let down by the services that the University of Liverpool provide (I can't comment on the other universities in Liverpool). Having a space like this could be vital for some people who perhaps want to know that they are not alone in the problems they're facing or they are simply looking for advice.'

'After discussing these sorts of confessions I was receiving with a close friend, we wanted to try and do something more to help which led to him founding UoL Students for Improved Mental Health Services – they have done amazing work so far!'

Will there ever be a Liverfess admin face reveal?

'I thought this might come up, I’ve had a fair amount of messages or confessions to the page asking for a face reveal but it’s not something that I really want. My friends know that I run it, and when I’m drunk I might tell others (embarrassingly), but I don’t think there will be a proper face reveal anytime soon. I think when I graduate I will do it, but that’s a while off.' 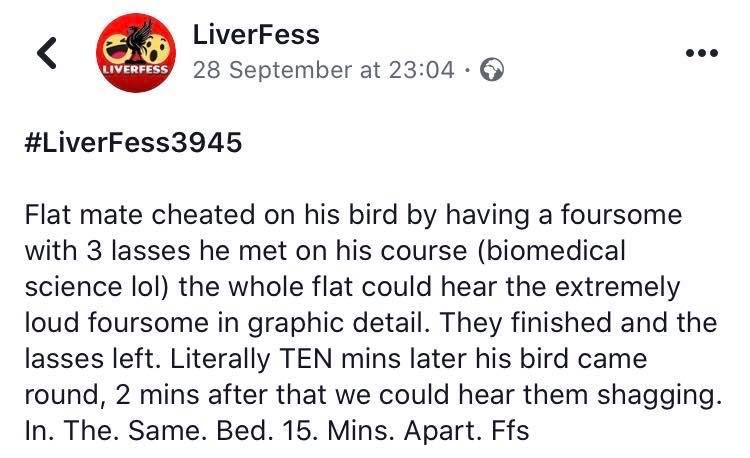 We have to ask this: how do you feel about the confessions asking to shag you?

'The confessions asking for this seem to have started at the same time that I added a second admin, so I feel they might be more directed to that person instead.'

Are you the same people who run Loverpool?

'Yes! Loverpool is ran by the same people. I am very proud if anyone has actually connected from a post, however I'm not too sure how many real success stories there are. Maybe that could be the next article for the Tab!' We're on it!

Does the anonymity of the page mean people can easily confide in you?

'Yeah for sure, it is a lot easier to talk about issues that you might be embarrassed to admit, or to give advice to others, if it's anonymous. That's part of the beauty of a page like mine. Anyone can help anyone out in the community.' 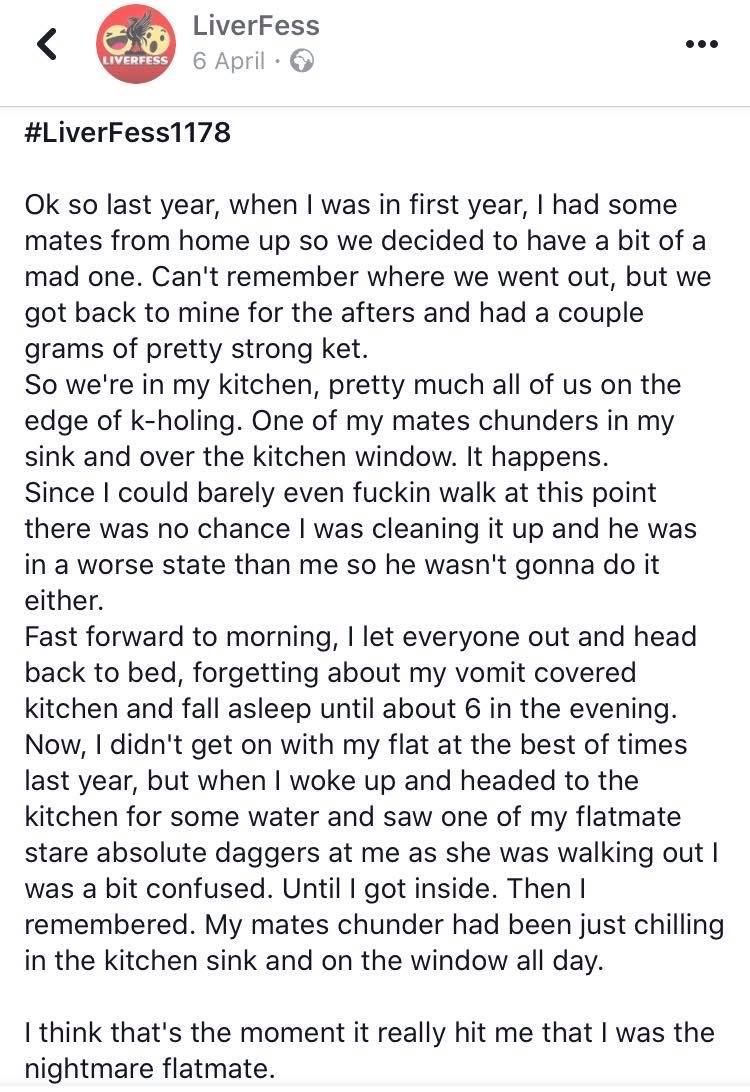 This is basically a short novel

Do you have a student life that relates to the confessions you get?

'I would say that I live a fairly normal student life, I enjoy drinking and missing lectures as much as the next student. I definitely find a lot of the confessions relatable and that is a big reason behind the strength of the page; it is just so relatable.'

If you're desperate to make your own confession, or just fancy getting the juiciest goss on campus staight to your timeline, visit Liverfess' page here.