‘Don’t be a fossil fool’

An urgent call demanding that the University of Liverpool stop its investments in fossil fuel companies is being made by Guild representatives this week.

The deputy president of UoL's Student' Union, Hannah Nguyen, will present a paper on behalf of Liverpool Guild and Fossil Free Liverpool to UoL's investment sub-committee, outlining the practical applications of ending investment in fossil fuel companies, as well as the responsibility the university has to heighten awareness of the climate crisis.

🐰🐣🥚EASTER EGG HUNT🥚🐣🐰 We’ve hidden an Easter egg in each of these images from key points throughout our year so far🕵️‍♂️🕵️‍♀️🔎🔎 Can you spot them? 👀👀👀

Attendees of the meeting, taking place on Wednesday 22nd May, include the president of the sub-committee, The Earl of Derby, Deputy Lieutenant, the Vice Chancellor, Professor Dame Janet Beer and the Director of Finance, Ms Nicola Davies.

The paper, entitled 'The Case for Fossil Fuel Divestment' focuses not only on the environmental damage that is caused by fossil fuel extraction, but also the sociological consequences of the actions of fossil fuel companies, such as Shell and BP. UoL has already agreed to partial divestment from tar sands and thermal coals, and should therefore have no shares in companies that extract these fuels from July 2019.

Hannah commented: “The university has a social responsibility to cut their ties to the fossil fuel companies leading us towards a climate crisis… Our public institutions haven’t been doing enough to respond to the severity and urgency of the crisis.

"There are people on the front line of fossil fuel extraction projects suffering at the hands of fossil fuel companies… People in the global south are disproportionately affected by climate change and are generally the least responsible because their contribution to emissions is so low."

However, the Guild does not think this is enough, with Nguyen adding: “The idea of sieving out the worst offenders just seems really illogical given that they are all contributing to this massive issue, and they are all responsible for some horrific human-rights violations.”

According to the paper, UoL currently has nearly £12 million invested in companies such as BP and Shell. With fossil fuels producing 21.3 billion tonnes of carbon dioxide every year, many campaigning groups say the practices involved are irresponsible and are demanding a halt to their investment.

A recent Guild petition is calling on the university to stop investing in oil and gas companies, create positions for student representatives on the investment sub-committee and refuse research partnerships with fossil fuel companies. 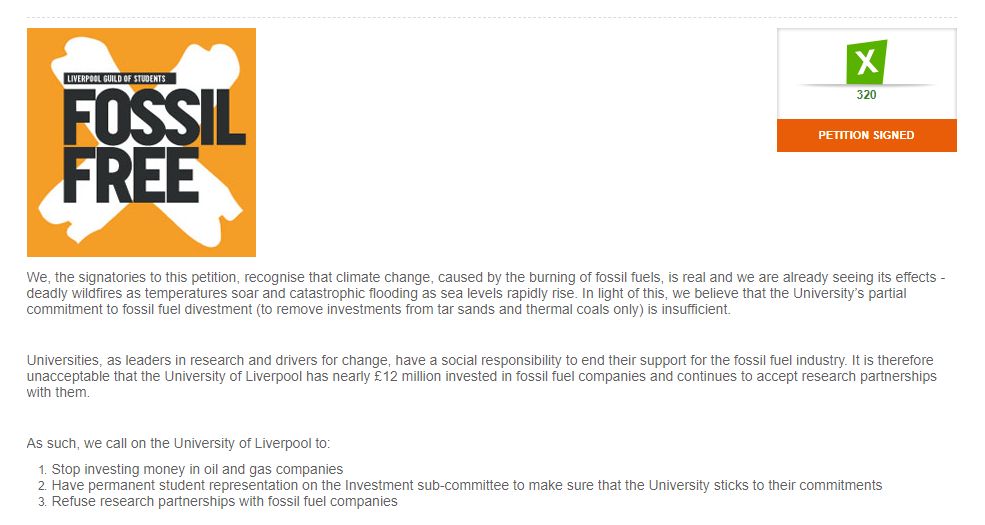 Nguyen added: “In some cases people aren’t just apathetic, they are actively against the campaign because they want to work for the fossil fuel industry and its about understanding that your geology degree doesn’t solely have a place in this terrible industry… I think it’s a really good year for this kind of campaign, given the wider context of the school climate strikes and extinction rebellion."

The campaign has been supported also by UoL’s People and Planet Society, a group that strongly advocates the university’s full divestment from fossil fuel companies. In addition, the paper has gained the support of many sports and political societies.

Erryn Jones, a first year Sociology student commented: "It's bad for our health and even worse for the atmosphere, I can't believe we're still investing in it".

More information about the campaign can be found here.

All the weird wellness tips Gwyneth Paltrow’s Goop has promoted