The time has come to select a new team of Student Officers for next year, and The Guild are doing everything they can to pull in the voters – every time the voting reaches a new benchmark, The Guild give away a prize to one voter at random.

Voting surpassed the 1,000 mark on Monday night and the first winner received a week of free lunches at the Courtyard or Guild Shop.

First year English student Georgia Lincoln said, “The Guild Student Officer elections allow students to participate in the future of the University and student representation, in general, gives us a chance to have our voices heard.” 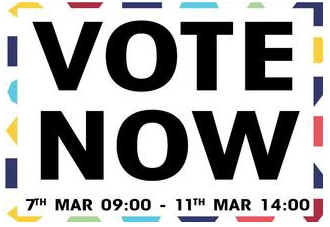 The winner of the election becomes the new Student Representative Officer and will take a lead on issues of education, welfare and student societies and activities.

Any University of Liverpool student is entitled to vote and this can be done at www.liverpoolguild.org, where you can also view the nineteen candidates’ manifestos.

The new Student Officers will be announced on Friday 11th March.