Students petition for Lincoln SU’s Chief Executive to stand down

The petition has had 189 signatures at the time of writing

An online petition is demanding for the CEO of Lincoln’s SU to step down in light of the recent news that a statement made by him on supporting BAME students had been copied from the University of Essex’s Students’ Union. 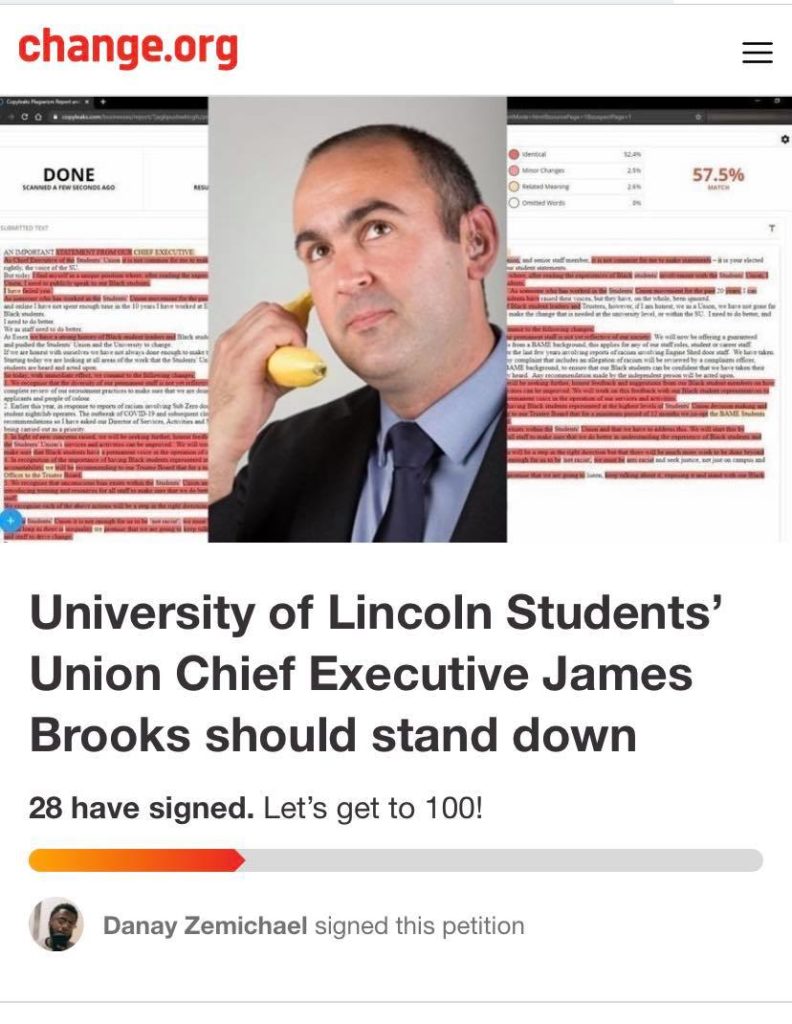 The petition outlines, “This is unacceptable and undermines the message set out in the statement, it gives off an uncomfortable feeling that embarrasses students to be part of the University, as well as suggesting that James Brooks himself does not care enough about the issues to put the time into writing his own statement, which is disrespectful and offensive.

“The BLM movement is of huge concern to not only students of the University of Lincoln, but to the general public on a much larger scale too, it is worrying that the Chief Executive of such an important organisation within the University can show so little care and therefore he should resign immediately and allow someone more in touch with modern issues to take the role.”

Danay Zemichael, the creator of the petition told The Lincoln Tab, “To write a statement about something that is important (in this case the wellbeing of BAME students) doesn’t need to take longer than 10-30mins to write, the fact James couldn’t even take 30 minutes out of his time to write the statement proves to me and other ethnic minority students that he is not fit for the role.

“I’ve never had a problem with the SU but now this has happened I have lost trust in them and I know others have too.

“I’m not the type of person to get offended quite easily nor do I make petitions but it’s clear to see that he does not care and it honestly makes me feel not wanted.

“If the goal isn’t met then I would at least like to see him punished and for his actions.”

However, some students have come to the defence of the CEO, saying, “Everyone is entitled to their opinion and can sign the petition if they wish. I just think it’s important to know and understand it was a mistake.

“A very bad mistake which an apology will not fix. Me personally, I would rather the SU Chief Executive prove he is sorry, rectify the issue, act upon what he said he will change.

“By him stepping down he will not be able to do as he promised.”

James Brooks has issued an apology regarding the copying of the statement, “I understand that the statement which I issued on June 16th was deemed insincere and disingenuous in its form and its message.

“We have removed the statement after discussions with some of our student members and recognise that it is 100% the correct thing to do.”

A statement from our CEO: pic.twitter.com/jMaHRvAm8R

The University of Lincoln has also made a statement, making aware that the Students’ Union is a separate organisation to the University.

To all staff, students and alumni:

Lincoln Students’ Union is an independent organisation and communicates with its own members.

The University of Lincoln is not holding a referendum. (1/5)

• “They’ve shot themselves in the foot”: Lincoln students on the SU’s BLM statement

• Revealed: New stats show how wide the black attainment gap is at your uni

• I was a black SU president – trust me, systemic racism is alive and well in universities