Another student was branded with ‘I’m a Nazi’

The University of Leicester have banned 'white t-shirt' socials after a Leicester student wore a shirt with “Hitler wanted my kind alive” written in marker pen across the back.

The student was on a night out when the photo was taken. He was taking part in a ‘white t-shirt social’, a university tradition where students can write anything they like across their friend’s plain shirts.

The picture was snapped in Leicester city centre at McDonald’s after the students had been on a bar crawl. Following other recent incidents where similar slurs and phrases have been spotted on these white t-shirt socials, Leicester University’s Jewish Social Secretary has spoken out about the situation.

“We've seen how white t-shirt socials at Exeter, Cardiff, Newcastle and other universities all made national news for anti-semitism and general bigotry,” Shayna Wise-Till wrote on Facebook. “Now, sadly, it looks like Leicester is following suit.” 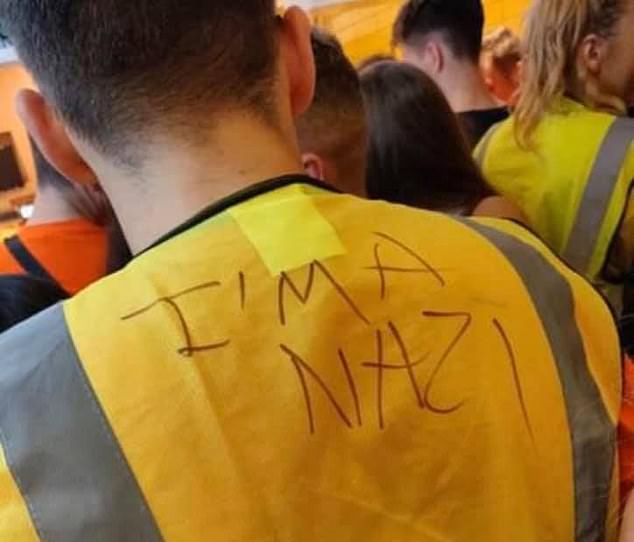 The anti-Semetic phrase was written on his high-vis jacket

The University of Leicester is currently looking into the matter and the student has since handed himself in. There is no information on the repercussions on him or his social friends at this point in time.

Last year, the Snowsports team at Lancaster University were caught in a similar situation having a range of religious, racist and generally offensive slurs written across their t-shirts.

Students at Plymouth were also suspended as a result of their white t-shirt social. The Conservative Society were seen branding themselves with Hitler moustaches and Stars of David.

Shayna has also brought to attention another picture which was taken by a student in Leicester and posted on Snapchat. The pen this time reads "I'm a Nazi".

There is still no information leading to this student or anyone who wrote the offensive phrase. He is thought to be a DMU student.

“I am very grateful to the full-time staff at the Students' Union who have taken both these incidents very seriously, and ensured necessary supports are in place for all students involved.

“I’ve spoken extensively to the CEO of the SU. He’s been great and super responsive, including me in the whole investigation process,” Shayna told The Leicester Tab. 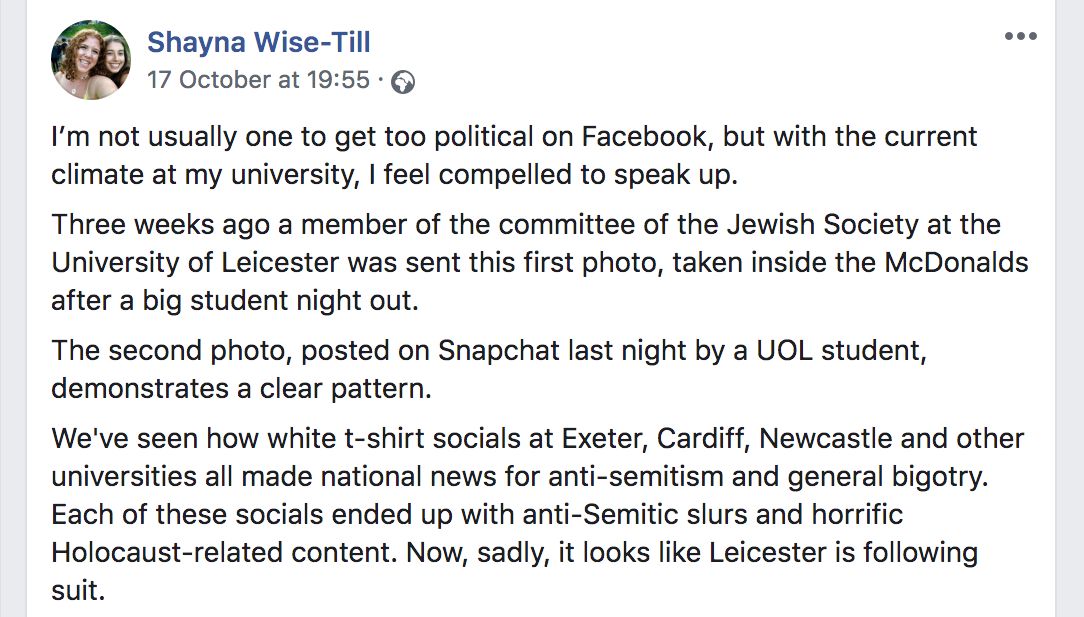 The Leicester Jewish Social Sec spoke up on Facebook

Just last week, a Soton student was seen with 'Greta Thunberg is Aspergers AF' written on his t-shirt sleeve at a social event. The influx of these offensive socials will likely lead to a national ban sometime soon.

A spokesman for The University of Leicester has stated: "A White T-shirt Social (or Plain T-shirt/Hi-Vis Social) is defined as; any event in which students (e.g. student group members, event attendees etc.) engage in decorating one another’s plain item of clothing by writing and/or drawing on them.

"These social events tend to foster and encourage behaviours which are not deemed acceptable by Leicester Students’ Union and the University of Leicester. This can include, but is not limited to, illegal or grossly offensive words, terms or images, written or drawn on attendees’ clothing – particularly, content related to protected characteristics and marginalised groups. This is evidenced by the recent incident at the University of Leicester and a significant number of examples across the University Sector in recent years.

"Therefore, in order to safeguard all members of the University community ‘White T-Shirt Socials’ as defined above are prohibited from taking place with immediate effect. Any student group that is identified as organising a ‘white T-Shirt social’ will face Students’ Union investigation.

"If you believe this message relates to any of your planned social activity or you have concerns regarding any aspect of your social activity or society, please email [email protected] as a priority to organise a meeting to discuss this further.

"As a Students’ Union we continue to develop training and support for your student group to tackle negative cultures and create an inclusive environment. If you would like to discuss specific training needs or issues in your group, please email [email protected] to organise a meeting with your development contact."