She told The Tab Leeds she knows the act was not malicious and she “encourages white people to use their platforms”, but would “rather allies work in solidarity and put the Black Lives Matter movement before their egos”.

Newton, also associated with Leeds Youth Strike, released a video statement on Sunday evening outlining her upset at the event being organised under the name BLMLDS without consent: “We did not organise this event… it was organised by two girls who are of Caucasian origin who did not contact anybody from the black community, they just organised it and put our name on it… I do not consent for my name of Black Lives Matter Leeds’ name to be used”. 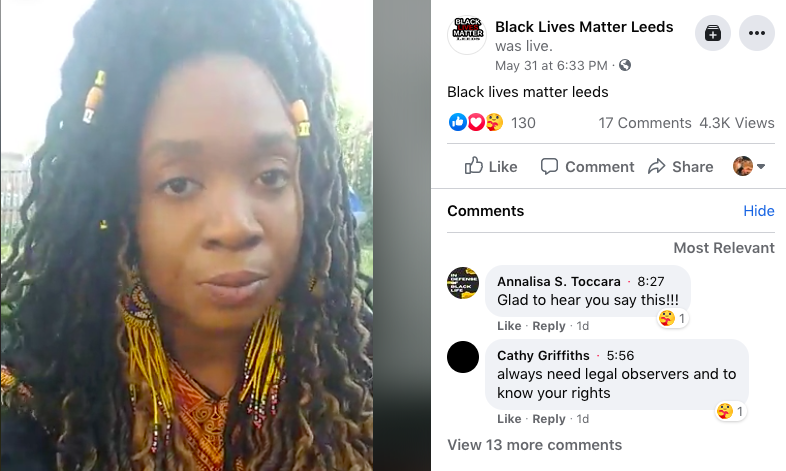 “You can’t do a project for a community you’ve never spoken to. You claim you contacted me but you never did. You definitely are executing white privilege by doing that. You are not being allies… I will not tolerate anyone using my name or using Black Lives Matter Leeds’ name.”

Newton expressed concerns about the safety and organisation of the ad hoc protest: “These people are doing what they want as allies, but it’s not that easy… there’s no safety standards”. She told The Tab she was worried her organisation would get the blame should the event go wrong and has received concerned calls from the police and Leeds Council who she usually consults before protests are arranged.

She goes on to confirm Black Lives Matter Leeds did not organise a protest in order to protect people from police brutality and BAME people, who are more vulnerable to Covid-19: “I don’t want any black or brown people to get a criminal record, die, or feel sick. That is not what I am fighting for.”

Newton told The Tab Leeds she believes the organisers’ actions were well intentioned despite unintentionally acting as white saviours: “Their intentions were not malicious, but people don’t understand how they can infringe on people’s rights and voices… right now, we need white allies, not white saviours”. In the Facebook video she says she is “happy to work with the two young ladies if they contact me… but I need you to put your privilege and ego on the side”.

The organiser tried to get support from a black person for fear of coming across as having a “white saviour” complex.

The protest was going to take place on Woodhouse Moor to allow for good social distancing, and personal PayPal accounts were shared to be donated to in order to buy PPE for protestors. Newton says more planning usually goes into these events to make them safe. She also says: “I would never ask you to make donations on PayPal”. 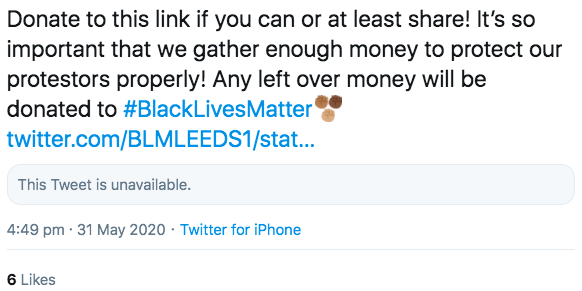 Whilst the event is now officially cancelled, other BLM protests not affiliated with the official Black Lives Matter Leeds group are surfacing online.

Marvina Newton exclusively told The Tab Leeds there is an official event in the works to respond to the demands of the people to protest. For now, she asks that white people who want to help should “be aware of their privilege. Even if they want to act, they should consider if their actions will silence a voice”. She urges the people of Leeds begin to create a black allyship program by putting BLM posters in their windows, flags on their houses, and badges on their chests. She says this is similar to the ways we express support as allies for the NHS and people from the LGBTQIA+ community, and will help create a supportive, inclusive space for black people without infringing on their voices.

The organisers of the proposed June 7 protest under the name of BLMLDS have been approached for comment.

More details on the event will be released by us in the coming days. You can keep up with what Black Lives Matter Leeds are doing on their Facebook page. You can watch Marvina Newton’s video here.