He has said it was a ‘mishap’

Ismail Zoutat, who is running for Equality and Diversity officer in the 2020 Leeds University Union elections, created a controversial humanism poster for his campaign which expressed ‘All Lives Matter’. The poster has since been removed.

We have recently been made aware that one of the Equality and Diversity candidates, Ismail Zoutat, has posters saying ‘All Lives Matter’. It’s important that you vote so that people like him are not handed power to make changes on campus.

Read about all of our endorsements below https://t.co/khYlLXLq8N

‘All Lives Matter’ is a controversial phrase as it has been used as an antithesis of the ‘Black Lives Matter’ movement popularised in America.

Zoutat defends himself, saying that the poster was a “mishap”, and that he did not consider the connotations of his wording choices when trying to create an inclusive tagline for his campaign. Despite being pictured in 2019 with Jacob Rees-Mogg, he states that he does not agree with conservative or far right views.

“In terms of the mishap, the poster stating ‘All Lives Matter’ was not in any way linked to the far right as some have presumed, indeed when I came up with the slogan I had a genuine assumption that it was the best term to describe how all peoples’ experiences would be taken into account, their struggles and their hardships.

“I was no way attempting to ridicule or belittle the Black Lives Matter campaign which is a very serious movement which has brought to light the systematic racism of police against African American citizens.

“I completely meant the term to be seen for its syntax value and not some far right ideology which I personally think has no place in the 21st century.” 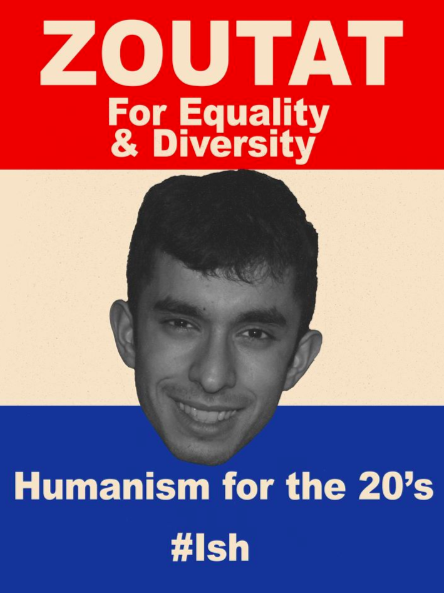 This Humanism poster still remains part of his campaign.

An unusually conservative candidate for the role of Equality and Diversity Officer, Zoutat is a third year nutrition student at the University of Leeds, and has been spotted on FaceBook posing the controversial conservative politician, Jacob Rees-Mogg, and Rory Stuart. 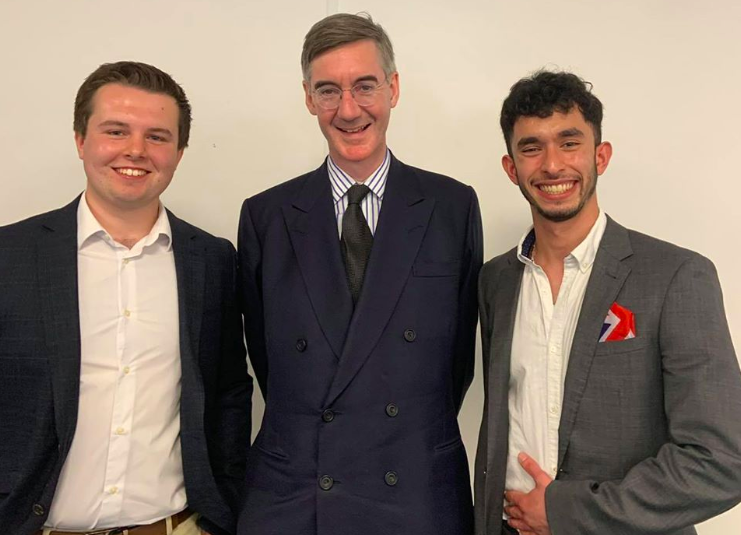 His unusual views and campaign has made some question its legitimacy, with one commenter asking, “are you the new Lord Buckethead?”

In an interview with The Leeds Tab, however, Zoutat assures his campaign is serious: “I am running for the position of Equality and Diversity officer here at the university Of Leeds. My candidacy although presented in a humours manner is very much genuine. If you take a look at my manifesto, I’m very clear in what I wish to achieve and want to leave a positive legacy here.”

His manifesto states “a vote for ISH, is a vote for a truly all-encompassing LUU.” Zoutat’s manifesto includes policies targeted at helping increase the achievements and and opportunities of working class students, and fighting anti-semitism. No policies are featured in regards to feminism or LGBTQIA rights. 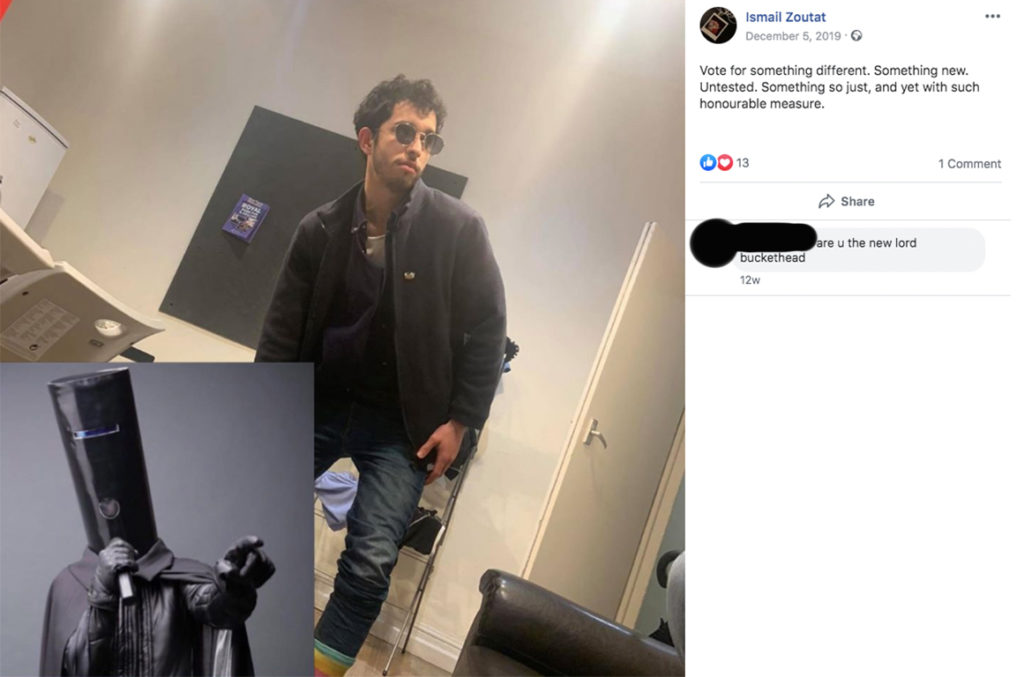 It is clear to see why some thought his campaign was a joke.

Zoutat is passionate in condemning call out culture, which he views as a “rot” to our democracy. In response to the hate he has received since releasing the poster, he says:

“It’s fucking painful, isolating, and so fucked up in so many ways how they did that to me. I feel like a bad person. I feel like I did something unforgivable, and I see no catharsis. As a political individual, I’m seeing a society so polarised that it has no room for mistakes, and that’s a sad thing.”

‘Perhaps the solution is in having a good old conversation’

Zoutat, rather more balanced than this, says: “Liberal ideology in itself is fine, however those on both ends of the spectrum, particularly the loudest voices are creating an atmosphere that essentially has no room for anyone to say anything without immediately being categorised.

“I don’t categorise people as left or right, the spectrum is not so 2D, and I think whats dangerous is that people are using these 2D scales to just simply dismiss anyone they don’t like.

“It’s dangerous for one reason, we don’t want to become a society that has to walk on egg shells around each other, we should instead be a society that understands that not everyone will champion the same things and so they may be ignorant of ideas that they have’t come across before. Perhaps the solution is in simply having a good old conversation.”

The LUU elections close at 7pm tonight. If you are a current student at the University of Leeds, you can vote here.