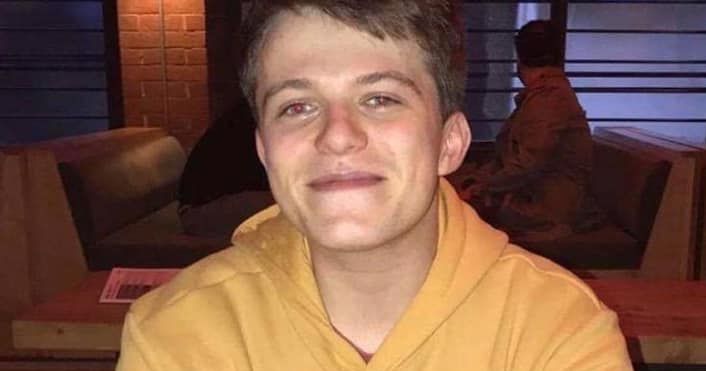 The most gripping saga of a generation

After what was arguably the most beautiful confession in the history of Leedsfess, students of Leeds are now safe in knowledge of which club toilets are the best ones to take a shit in.

But the biggest question on everyone’s mind – WHO was the author of this beautiful ranking? 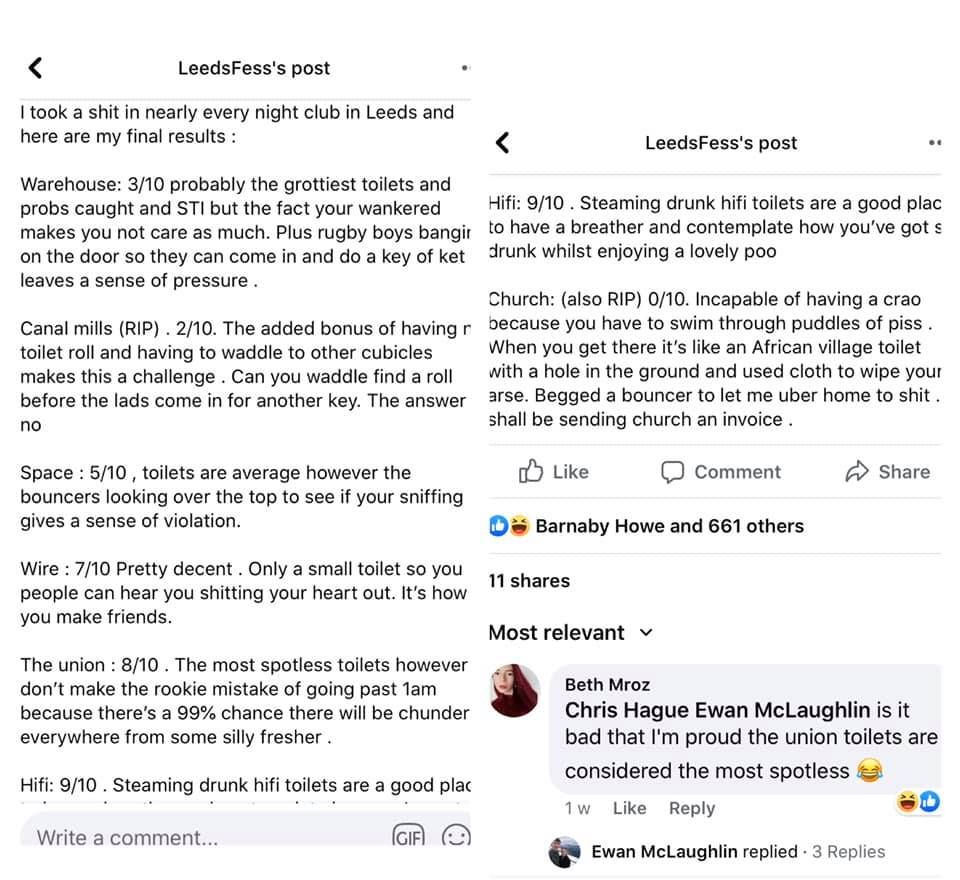 It was a guy called Matthew, apparently.

Matthew unveiled his true identity in response to “Poo Girl’s” ode (another confession submitted by a girl where she also ranked her pooing experience in every club) where he described himself as “just a little chem boy” with a pretty bad case of IBS.

He also mentioned that “evidence can be provided,” for anyone doubting that he is indeed the real shitter. Lovely. 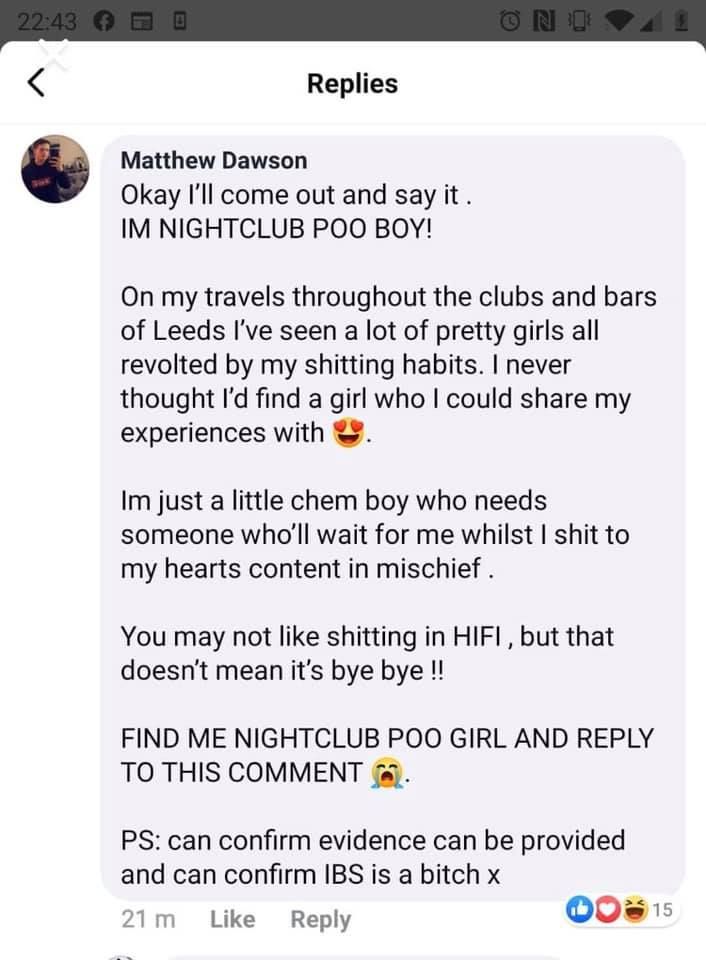 We messaged Matthew to ask him how it all started, and whether or not he had managed to find his one true shitting love.

He told the Tab Leeds he first had the idea for the confession when he was “thinking about the time I was in Space taking a shit and I had two different bouncers look over the top to see if I was doing drugs or something.”

He told us all his mates knew that he often disappeared on a night out for a shit, saying “it’s just a good break to the night to sit down, have a poo, sit on your phone, contemplate how you got so hammered and then go back out and join in again.”

But how does he remember his club poo experience when he’s bladdered?

“Honestly it’s the part of the night that I always remember. So if I’m hammered I can try and work around that memory of taking a poo.”

After concluding that the bogs in the union and at Hifi were the best places to take a shit, Matthew wanted to share his findings with the world.

“I wrote it in my notes and then posted it to Leedsfess during exams because I was sick of revision. Literally just wrote it and thought “meh this is pretty funny, might as well post it””

Obviously then Matthew was super excited when his shitting female counterpart posted a similar confession.

“We clearly agreed that we do love a Union poo and Church was a lost cause. I just thought I could educate her on the pleasure of a Hifi poo.” 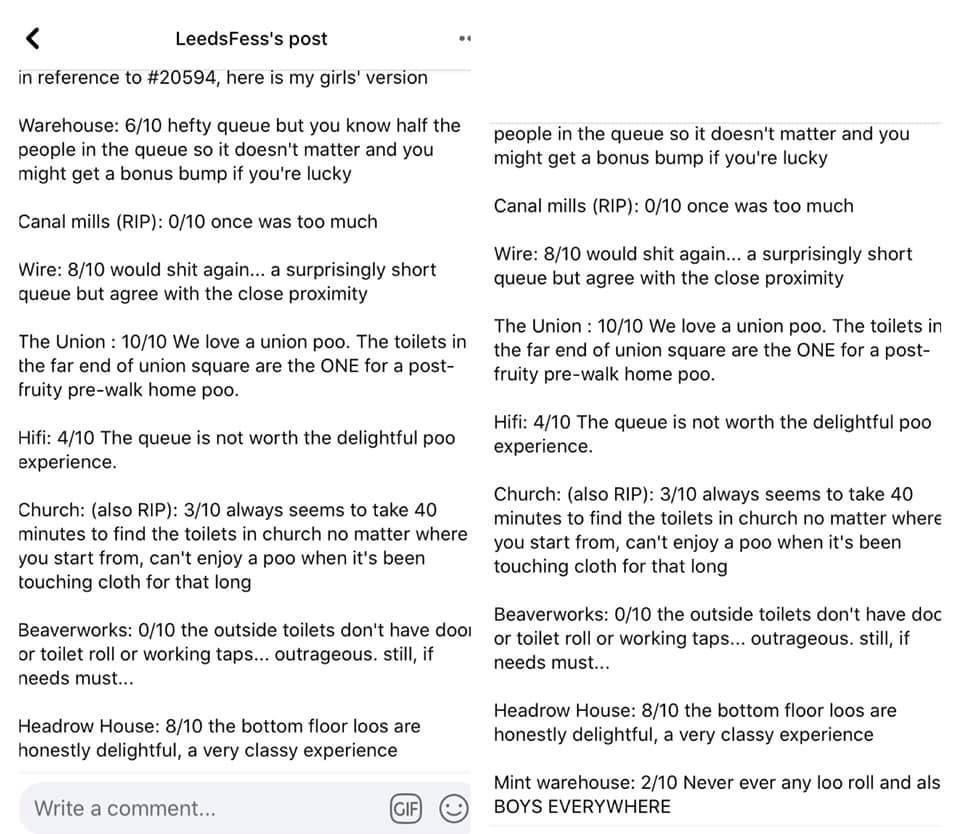 Poo Girl then went one step further and wrote her own romantic ode to Poo Boy.

“When I saw the ode to Poo Boy I genuinely lost my shit (literally). But the question is, how do I find her?”

Poo Girl if you’re reading this, please reveal yourself and go for a drink with Matthew.

We can’t wait to hear what happens.